Working in partnership with the non-profit organization, Creating Friendships for Peace (“CFP”), the Baltimore-Washington Conference recently made a significant contribution to peace building in both the troubled island of Cyprus and in Israel/Palestine.

The first week of July, our West River Camp hosted 20 Muslim and 20 Christian teens from Cyprus. 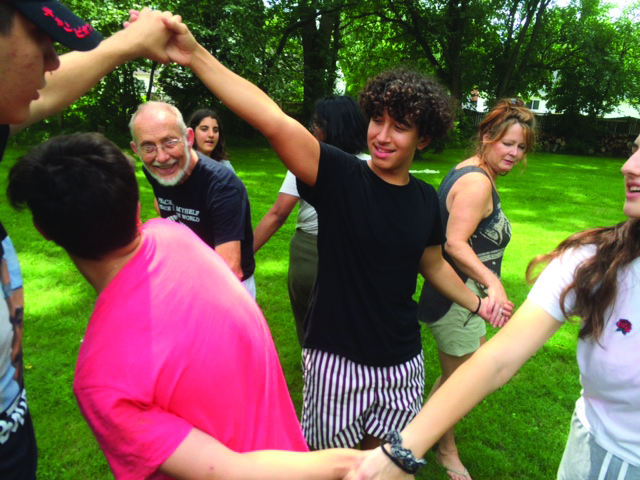 Located in the Mediterranean Sea only 70 miles from Syria, Cyprus had a civil war in 1974 that killed thousands and divided the island in two as the result of a UN patrolled border. Christian Cypriots who lived in the north were forced to give up their homes, farms and businesses and move south. Muslim Cypriots in the south were forced to give up the same and move north. Approximately half of the population was made to be refugees.

Growing up, the teenagers of each side were taught how the terrible people on the other side started the war.

The 40 Cypriot teens were chosen for their leadership ability and potential of influencing their peers upon their return. Besides enjoying the camp’s outstanding recreational facilities between training sessions, the teens spent most of their time learning ways of cooperation and peacemaking.

After the camp, the teens, matched in pairs of one from each side of the conflict, and were sent to five areas across the country to stay with host families for three weeks.

If the past 10 years of CFP’s experience repeats itself again this year, there the teens will completely dispel their prejudice and become the best of friends resolved to encourage and support each other in peacemaking work back home.

Those teens were joined on the second day at the UMC Conference Mission Center by a pair of boys and a pair of girls from Israel/Palestine who were beginning a separate CFP program.

The one week overlap of the two programs across the five sites in the US is intentional so that the Cypriot teens can give the Israeli and Palestinian teens reason for optimism.

The Cypriots shared how the 10 years of the program in Cyprus has been changing the attitude of the young adult and teenage generations and how the politicians have started to notice that change in their voters. The teens from Israel/Palestine also had their own specific peace training the following week at the UMC Conference Mission Center.

The program focuses on teenagers because they are usually starting to think for themselves and often question the opinions of their elders. The new ideas and experiences teens encounter can shape life-long attitutudes.

Most host families come from churches of various denominations.

David Ward and his wife, who are members of Glen Mar UMC in Ellicott City, hosted a pair of boys for three weeks in July, said, “After two careers spent watching international problems, my wife and I are pleased to have found in CFP a way to help make peace simply by getting to know a pair of pleasant teenagers and helping them get to know each other. The boys freely admitted to the prejudices they had before joining the program and welcomed the new view of the other side,” as well as the cross-border friendships they acquired as a result of the program.

Ward further said that, “it was a great chance to spend time with bright, articulate, thoughtful young folks.” He encourages “anyone who’s even a little interested” to inquire about the possibility of hosting next July.

Those interested in learning more about CFP can go to www.friendships4peace.org

*Thomas McCarthy, who is married to the Rev. Ann Laprade, the superintendent of the Baltimore Suburban District, is a 28-year volunteer with CFP and a predecessor program focused on teenage Catholics and Protestants in Northern Ireland.