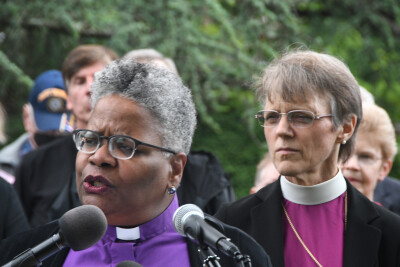 On May 26 at 12:32 p.m., at the exact time a gunman broke into an elementary school in Uvalde, Teas, two days earlier, the largest bell at the National Cathedral tolled 32 times – once for each of the victims of the mass shooting at a grocery store in Buffalo and Robb Elementary School in Texas.

As the death knell rolled out over Washington, Bishop LaTrelle Easterling and the Right Rev. Mariann Budde echoed the bell’s lament and its call to action. Their message was a simple one: “enough is enough,” the mass shootings plaguing this nation are breaking God’s heart and the heart of God’s people.

The two bishops, Easterling from the Baltimore-Washington and Peninsula-Delaware Conferences of The United Methodist Church and Budde from the Episcopal Diocese of Washington, were joined by other religious leaders across the country, speaking at press conferences in their own communities, each amplifying a shared message that called people to accountability and a response to gun violence.

“There was a time when these atrocities shocked our conscience, but as we fail to demand action and our elected officials fail to take action, we grow less shocked and more numb by the day. This cannot stand,” said Bishop Easterling in a press conference in the Bishop’s Garden at the National Cathedral. “This cannot be who we are. It is unfathomable that our children bear the burden of our indecision, inaction and political cowardice. Failure to act now is to be complicit with the next mass shooting.”

Easterling joined other religious leaders in “calling on elected officials to find a balance between the constitutional right to bear arms and the right to life, liberty and the pursuit of happiness.” The United Methodist Social Principles call for a ban on large capacity ammunition magazines and weapons designed to fire multiple rounds each time the trigger is pulled. “There is no legitimate need for or inherent right to bear such weapons,” she said.

To prevent future tragedies people of faith must “seek the courage to speak out and act against hatred, violence and all the oppressive evils that swirl through our culture,” said Bishop Easterling. “The work that was required to create weapons of death must be matched by the work to transform them into instruments of life. This is how we put feet to our prayers.”

Budde echoed her call. She shared her memories of the families from Sandy Hook Elementary School in Connecticut who travel to Washington, D.C. each year to advocate for stricter gun laws, including a ban on the assault-style weapons that killed their children in 2012 and hundreds of other people since then.

“The grief never goes away,” Budde said. “As one father said on television, 'There is no "moving on;" there is only moving forward.'”

“While the causes of gun violence are many, the common denominator in all of them is easy access to lethal weapons,” Budde said. “Until we have the courage to put the same boundaries on firearms that we place on every other high-risk product in this country, we can expect gun deaths to continue in mass shootings, between individuals, and through suicide.”

In Kansas, at the same time the bell tolled in Washington, D.C, the Rev. Emanuel Cleaver III, pastor of  St. James UMC, and the Rev. Adam Hamilton, pastor of the United Methodist Church of the Resurrection, spoke at a press conference.

“I think when we have the means to do something and we don’t do anything, we also are culpable — we also have some responsibilities for what happens in our schools,” Hamilton told the press.

As the bell began to sound the vigil in Washington, the Very Rev. Randolph Hollerith, dean of the National Cathedral, shared how the 12-ton Borden Bell has been tolled “far too many times” in lament, especially for victims of mass shootings. “I don’t want to gather again for the purpose of tolling this bell to mourn the loss of innocent life. I don’t want to toll this bell for another life lost to America’s cancer of gun violence,” he said. “Enough.”