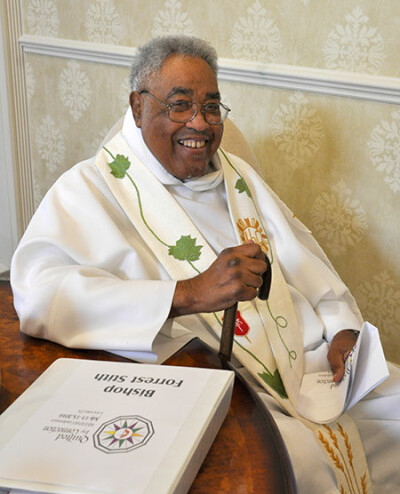 In June, Bishop Forrest C. Stith, who is retired and lives in Upper Marlboro, reflected upon the 2016 General Conference. His thoughts filled more than 16 pages. We share a small portion on the Global church with you.

At the 2016 General Conference in Portland, Ore., for the first time, United Methodists experienced a new reality – what it means to be a global church. Some people commented on the presence of spontaneity, passion, evangelistic fervor and vitality offered by churches from Africa and the Philippines. It was reported that this year 44 percent of the body came from the Central Conferences.  Beyond the euphoria of great and diverse fellowship, I feel compelled to raise some questions.

First, can we afford the current model?

One of the primary escalations of costs for the denomination is attempting to evolve from an American church with global partners to a fully participatory global church structure.  Major costs include transportation. At General Conference, the average travel costs for participants outside the U.S. was $3,000 per person.

Ten languages were spoken at the General Conference. Almost 200 interpreters were needed along with support staff. The cost was astronomical, exceeding $2.3 million.

Second, how do logistics relate to cost factors?

There is an underlying assumption that to be a global church, all of the continents should mimic what happens in the church in the U.S. This leads to challenges. For instance, while Americans take travel for granted, in much of Africa, public transportation is limited and erratic. Communication systems are also often nonexistent or fragile. It is therefore difficult for Central Conferences to operate committee meetings, such as a College of Bishops, episcopacy committees or executive committees. There is also the practical reality of periodic threats of violence or international diplomatic issues that limit visas and travel.

The paradox is that while churches in Africa and the Philippines are the fastest growing, they are limited in their financial ability to support existing congregations, to undergird growth, and implement global structures.  The conundrum is that churches in the U.S., which are losing members and resources, are placed in the untenable position of increasing support to others. This can create even more decline.

Third, what does it mean to be inclusive?

We need to redefine inclusiveness. In an attempt to be inclusive, the General Church uses the formula of proportional participation based on numbers of constituents as the only criteria.

In the U.S., for more than 40 years, we prided ourselves on an inclusiveness model based on diversity of language, ethnicity, culture geography — not numbers. The ramifications are major. Left off the table of decision-making are large segments of the denomination, who lack large numbers but often bring unique and differing perspectives.

Meanwhile, small churches in rural or impoverished areas of the U.S. are expected to give sacrificially in order to support a global church, which may set priorities and make the decisions for their ministry without their involvement.

Perhaps we need to review what a board might need to be from a global perspective and possibly have sub-committees working regionally.

During the racist days of the Central Jurisdiction, most African-American churches proudly paid their full apportionments, which were often based on membership, not financial viability. Remember, most black communities have historically received income at one-half the income median of white America. But these churches perceived that paying a full share was the reality of full participation and equality.

The General Conference on Finance and Administration recently introduced a formula for Central Conference churches to contribute more equitably, but it will not compare with Jurisdictional giving.

Many American churches are deeply involved in mission support and funding, but they do not always find that the funds raised for Africa are used appropriately.

In a few instances, some of the newer conferences have serious financial issues.  In at least one conference in Africa, even GCFA and GBGM, after several audits, are unable to gain restitution for missing funds or accountability of hundreds of thousands of dollars given by U.S. churches. There seems to be no Disciplinary process for global accountability. Can we be global if part of the church is not accountable?

When I visited Africa, I had no doubt that the church was growing rapidly.  However, no one was counting, or even knew the names of, many of the attendees. Instead, the pastor estimated the number present in what we used to call “a preacher’s count.” However, the General Church is using these soft statistics to determine representation on boards, agencies, committees and even the General Conference.
I would hope that GBGM would offer a membership audit before 2020 to assure correct proportionate representation, before the implementation of new areas and the fair distribution of resources.

Fifth, how do we address cultural diversity?

While I lift up a number of questions, my greater concern is that we are not addressing realistically how to be a global church.  Do we need a model like the World Methodist or regional bodies with some kind of semi-autonomy?  Even the proposed Global Discipline is limited in scope. I would suggest that any Social Principles need to be based on the geographical/social/political climate to which it is addressed.

I am certain that absolute solutions will not be found in legislative action. We must seek a methodology of living together in a diverse world and a diverse church.  It would also help to study church history, and how the church has survived and thrived amidst divisions of theology, culture, and race. And, as we await what the Lord will do, let us pray that we all may be one in Christ Jesus.