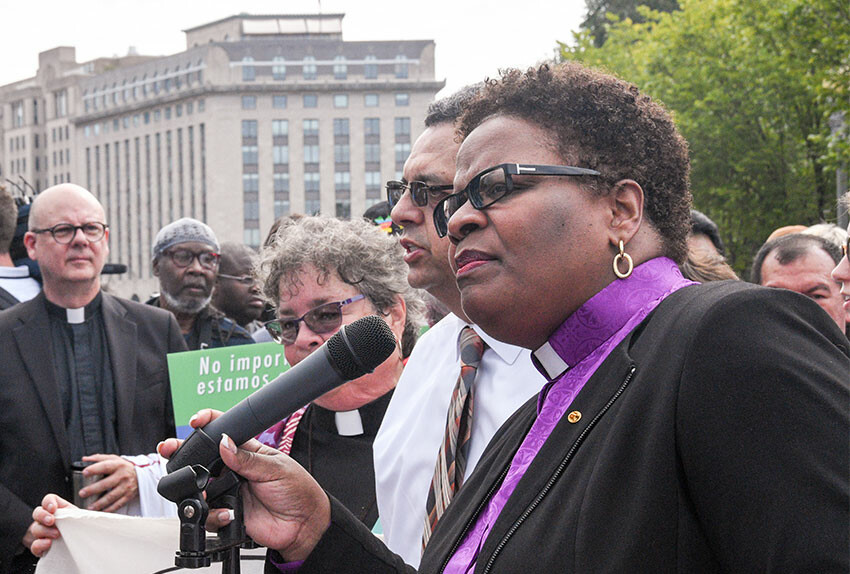 Bishop Easterling speaks at a rally on DACA in front of the White House on Sept. 5, 2017.

Moments before the federal government decided to end the program that provides permits to undocumented immigrants who arrived in the U.S. as children, leaders of the Interfaith Immigration Coalition joined members of immigrant communities from throughout the D.C. region at a rally outside the White House.

“This is what America looks like,” they chanted in hopes of persuading members of Congress to extend the Deferred Action for Childhood Arrivals, also known as DACA.

They cheered as Bishop LaTrelle Easterling, presiding bishop of the Baltimore-Washington Conference, urged lawmakers to consider how DACA transcends partisan politics and dramatically impacts the lives of more than 800,000 of the “Dreamers,” now working and going to school in the U.S.

“We are a nation founded upon principles of justice, fairness, and equality. Those principles also reflect our Christian values,” Bishop Easterling said. “We cannot claim a foundation of while espousing and implementing policies and practices that are the very antithesis of justice, mercy, and righteousness.”

(The text of her statement is below.)

After the rally, Bishop Easterling acknowledged how United Methodists across the political spectrum feel differently about DACA. But, she stressed, immigration is an important issue for United Methodists and people of faith to be in profound conversation about.

DACA is “really is an issue that tears at the fabric of who we are and who we say we are as Americans,” she said.

The bishop reiterated that the United States is a nation of immigrants and that the children affected by DACA are some of the most vulnerable.

“The individuals protected by DACA were brought here under no control of their own, and no fault of their own,” Bishop Easterling said. “I think it would be a travesty if this country, if this administration, turns its back on those young people now.”

The bishop questioned the future for these children should they suddenly be deported. After all, she said, for many of them, the United States is the only home they’ve ever known.

“Many to their parents fled their home country because they were under threat or being tortured,” she said. “This is their home now. We feel it is important as faith leaders to be here, to stand in solidarity with them and to make a statement.”

Full text of Bishop Easterling's statement to the DACA rally

I stand before you on behalf of the Interfaith Immigration Coalition. We gather this morning to make our voices heard concerning the potential termination of the Deferred Action for Childhood Arrivals (DACA) program by the current administration. As people of faith, and as Americans, we cannot state strongly enough our opposition to that proposed action. All faith traditions are rooted and guided by a belief that humanity is inextricably connected through our relationship with our Creator. That connectedness transcends borders, race, political affiliations and any other condition of human construct. Further, our scriptures and traditions teach us to care for the vulnerable and marginalized among us, which, by definition, includes children and immigrants. We are a nation founded upon principles of justice, fairness, and equality. Those principles also reflect our Christian values. We cannot claim a foundation of while espousing and implementing policies and practices that are the very antithesis of justice, mercy, and righteousness.

DACA, as designed and implemented in 2012, created a safe-haven for young people brought to this country by their parents in hopes of establishing and maintaining a viable future. These children have aptly been called “Dreamers.” The nearly 800,000 Dreamers who have benefitted from DACA are contributing to the financial stability, security, and welfare of our nation. Ninety-one percent of Dreamers are currently employed. As a result of that employment, Dreamers are buying homes and other goods, strengthening the tax base, and contributing to Social Security and Medicare. DACA also prevents Dreamers from being abused or taken advantage of by employers through criminally low wages, unsafe work environments, or harassment.

We must resist narratives that purport a lack of sufficient resources for everyone. We are one of the wealthiest nations on earth. When we govern efficiently and effectively, we champion our resources in ways that provide prosperity for all. There is no existential threat to our way of life by the Dreamers who live, work, and are educated here. Yet, by ending DACA, we would be creating an imminent threat of danger, insecurity, and dislocation for nearly one million young people. These Dreamers know no other home; the United States of America is their home.

There are iconic images from history that haunt us because they capture horrific points in time: images of crowds jeering at children of color attempting to integrate schools; pictures of military weaponry threatening the safety of unarmed civilians; scenes of children interned behind barbed wire. We look upon these images and ask ourselves how it could have gone that far. However, if this administration orders the capture and deportation of nearly one million children and young adults, history will look upon us and ask how we could have gone that far.

We respectfully call upon President Trump to continue and to work with Congress to propose, pass, and implement legislation that will concretize the program, remove the threat of deportation, and create a viable fast-forward for these Dreamers. There is bipartisan support for this course of action, and we stand united to press forward for its full realization. Thank you.