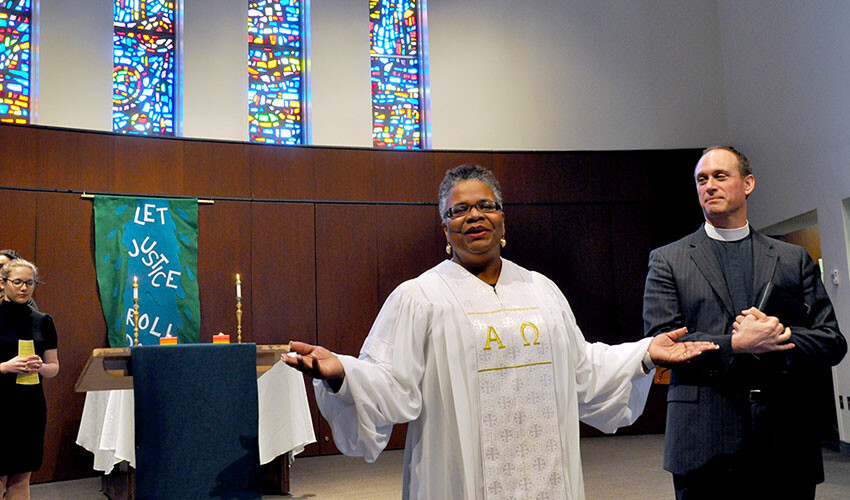 Bishop LaTrelle Easterling gave a passionate sermon about the road ahead for finishing the work that Martin Luther King Jr. started 31 years ago while speaking at American University Jan. 18. She spoke at the annual Interfaith Service held in remembrance of the civil rights activist.

As a trustee of the Methodist-affiliated university, Bishop Easterling was given the opportunity to speak at this service. She is the first United Methodist bishop to preach at the Kay Spiritual Center on campus.  Her message centered around Psalm 43 as she called the congregation to live into the creation of this great nation, one created on the importance of equality for all.

This year was the 31st celebration of Martin Luther King Day and the bishop reminded her congregation that he was first a pastor.

“Martin Luther King was at a time when the black church understood itself as both soul saver and chain breaker; salvific agent and status-quo agitator. It was a prophetic period when courageous men and women set their faces toward freedom and would not look back,” the bishop said.

“Time , marched on. Unfortunately, that voice, too often, moved from prophetic to apathetic and some might say just pathetic. The cries for freedom have too often now become cries for assimilation, acceptance accommodation,” the bishop said. “Have we lost our hunger and our thirst for righteousness?”

Whispers were scattered through the room as people responded to her question.

The bishop’s message continued with a brief history of slavery in the United States. We have “historical amnesia,” she said. “We have become complacent because we have forgotten our past.” African-Americans have been subject to four forms of slavery: mind, body, spirit soul.

More than 12 million people made the middle passage from freedom in Africa to enslavement in the United States and were introduced to white supremacy, the bishop said. According to the slaveholders, “God had blessed it and called it good,” said Easterling. The enslaved looked to God for their spiritual freedom. They struggled to reconcile the two representations of God: theirs and the slaveholders.

With the 13th amendment came freedom from physical bondage. At this point, Easterling reminded the congregation that this was not the end goal; they did not stop fighting their oppressors. King made grand strides in this area, she said, as he fought and organized the population in the struggle for legal equality and inclusion.

The Civil Rights Act ushered in a new era of equality. Excitement flowed through the congregation as they recalled the importance of this event in the way they live their lives. But the bishop wasn’t done. This is where we lost the hunger for justice that we had through the time of King, she said.

Race still places mental bondage on different minority groups in the United States. We further “Dissociative Identity Disorder” as a nation, deluding ourselves into believing that minorities are the stereotypes we confine them to. This undercurrent of racism is still holding people as less than equal, she said, as she called on everyone in the room to fight against it.

“Our theological minds must be free from the notion that one’s proclivity one’s preciousness before God. We are all -- heterosexual, homosexual, bisexual, transgender and queer -- loved by God and beloved by God, and yes, you can tell them a United Methodist bishop said so,” Easterling said.

“We are all Native American, African American, European American, Hispanic American, Asian American, loved and beloved by God. We are all differently abled, the one percent, the 99 percent, precious in God’s sight. Therefore, the Church, the Academy, and prophets must reclaim our voices of advocacy, agitation, and affirmation. We have the responsibility, it’s really the duty, to reclaim the prophet’s voice for preaching the Good News of Jesus Christ,” she said. The congregation erupted into applause and snaps.

Turning the message to the current battle for justice the country is approaching for a moment, she recognized “everybody’s eyes are fixed on Friday (the inauguration of President Donald Trump).” Easterling emphasized that “we must speak out for justice. It is only then that we can truly stand together and say ‘Free at last. Free at last. Thank God Almighty, we’re free at last.’”

*Meghan Howie is a journalism student at American University.