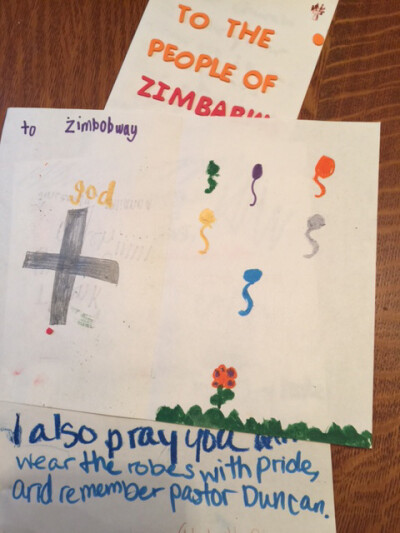 As we arrived in Africa, the sun rose to meet us. It’s an interesting thing to watch the sunrise from above the clouds.

I am one of 30 members of the Baltimore-Washington Conference – 15 and 15 clergy –arriving in Zimbabwe to help teach at a Pastors School and to help build the partnership between the BWC and United Methodists in Zimbabwe.

In my suitcase, are robes and stoles from Richard Duncan, the former pastor of Melville Chapel in Elkridge, in the Annapolis District. Richard died recently. Tracy, his widow, and members of Melville thought it might serve as a legacy of sorts if the garments he preached in were shared with others in the global church who love to share God’s Word as much as he did.

Richard, they told me, was a man who preached the Bible with love and conviction. Its words shaped his world.

The children of Melville’s Sunday School wrote notes to the new owners of the robes, asking them to remember their pastor.

The Rev. Sarah Schlieckert also has a suitcase full of many robes and stoles that will be handed out at the Pastors School. They were donated in response to an invitation Sarah made.

Many of the pastors in Zimbabwe, I’m told, earn about $300 a month. Vestments for worship are not easy to fit into such a budget. I keep thinking of the preachers who will slip them on, and of the they’ll share in their ministries.

I like that our partnership is helping to clothe them in love and in leadership. I also appreciate the clouds from about 39,025 feet as a new day – and a new chapter in our partnership – begins.