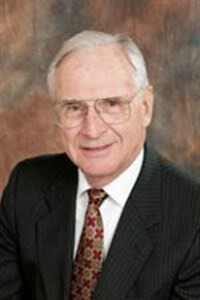 op Joseph Hughes Yeakel, who served as the episcopal leader of the Baltimore-Washington Conference from 1984 to 1996, died July 4 at the age of 93 at the Danbury Woods Senior Living Center in Wooster, Ohio. . The prayers of the Baltimore-Washington Conference are with the family and friends of this amazing man of God who served the church with all his heart, mind, and soul. We grieve his loss and rejoice in a life superbly lived.

Bishop Yeakel entered the ministry as a pastor in the former Evangelical United Brethren Church and served as a leader when that denomination united with the Methodist Episcopal Church in 1968.  He was elected to the episcopacy in 1972, serving as resident bishop of the New York West Area from 1972 to 1984, and the Washington D.C. Area from 1984 to 1996. He was president of the denomination's Council of Bishops in 1992-1993.

Bishop LaTrelle Easterling, the current bishop of the Baltimore-Washington Conference, celebrates Bishop Yeakel’s commitment to his call, which was "rooted in his deep love for God and God’s people. He leaves a palpable legacy within the Baltimore-Washington Conference where I have heard many stories extolling his wisdom, witness and wit," she said. "The phrase I most often hear associated with Bishop Yeakel is, “Keep the main thing, the main thing.” Bishop Yeakel did so with faithfulness, humility, and generosity.

He is also remembered as being one of the finest parliamentarians in the denomination who had a vast knowledge of and appreciation for the Book of Discipline and for his efforts leading the conference through a monumental strategic planning process.  Later in his ministry, he was an outspoken advocate for inclusion.  Bishop Yeakel  "often lamented the deep division within the church. He was committed to the unity of the church and to justice for God’s people," Bishop Easterling said. "His signature was among the retired bishops who on January 31, 2011, called upon the denomination to remove the restrictive language within the Book of Discipline. "

Throughout the Baltimore-Washington Conference and beyond,  clergy and laity remembered and honored Bishop Yeakel as a caring and generous leader,  someone who “gave himself away for the good of the Gospel,” and a man of integrity and conviction with “a brilliant mind, prophetic ministry and wide, inclusive spirit.” (See a remembrance from his friend of 68-years, Rev. Wilson Shearer.)  He is being lauded and remembered as "a wise and compassionate bishop of the church with a pastor’s heart and wisdom reflecting the mind of Christ."

Bishop Yeakel was born in Mahanoy City, Pa on March 12, 1928. He attended Lebanon Valley College and served a tour of duty in the United States Navy Seabees.

He served as pastor of the Gardners-Mt. Victory Charge near Mt. Holly, Pa., during his senior year in college. He attended United Theological Seminary in Dayton, Ohio (M.Div.), serving as a student assistant pastor at the Euclid Avenue EUB Church in Dayton.

He became a member of the Central Pennsylvania Annual Conference of the former Evangelical United Brethren Church as a probationary member and was ordained an elder by Bishop George Edward Epp. He was Assistant Pastor at Otterbein Church in Hagerstown, Maryland; Pastor at Messiah Church in York, Pennsylvania; and Memorial Church in Silver Spring, Maryland.

A service of Faith and Memories will be held later this year. There will be no viewing as Bishop Yeakel requested his remains be donated to the Cleveland Clinic to be used for medical education and research. His cremains will be inurned in the Lakeview Columbarium at Camp Casowasco Camp and Retreat Center in Moravia, NY.

Gifts may be made in his honor to Casowasco Camp & Retreat Center. For more information, visit https://casowasco.org.

Those wishing to send condolences to his family can mail them to: Josie Drushal, 5952 Township Rd 212, Lakeville, OH 44638. E-mail correspondence may be sent to

I and my family are so heartbroken. We dearly loved Bishop Joe. His calming voice could smooth the storms in our lives. His insights were remarkable. He definitely was a man of God. He was the light in the dark. We are honored to have Bishop Joe in our lives. His wife, Lois helped my mother back in 1958 with a feeding issue regarding a baby bottle for me when I was a baby. My mother told Lois that she was a lifesaver. And the same goes for Bishop Joe. He was a lifesaver in our lives many many times. We will miss him terribly. The world has lost a wonderful man.

Bishop Joe Yeakel was the reason I was able to graduate from Geneva High School. He was Bishop and Friend to my late father Rev. Charles H. Marks and mother Marilyn C. Marks in the Finger Lakes and Western New York Area in the 80's, and he agreed during a meeting with my parents to allow us to remain in Geneva, New York where my Dad was serving as UMC District Superintendent, instead of moving us during my Junior year. I will always be grateful to Bishop Yeakel for this and I send my most sincere condolences to his family and friends. When I see the title of "Bishop" I always immediately think "Joe Yeakel", and my parents, who also recently passed away, always spoke of him very fondly. I'm so sorry to hear of his passing.

As an appointed institutional chaplain, Bishop Yeakel embraced me and my ministry as an important mission of the church. He supported me with his presence and words of encouragement when I was faced with challenges that specialized ministries face. His desire to have a personal relationship with persons was reflected in his ability to remember your name and the names of all his flock.
Charles "Buzz" Grimm