Information from Church Mutual Insurance about Safety and Security

When the Critical Conversation on Gun Sense was starting at the Baltimore-Washington Conference Mission Center at 1 p.m. on Oct. 17, the Rev. Kay Albury was receiving news that Howard University was on lock-down. There were reports of an active shooter on campus, where her daughter, the Rev. Alexis Brown, serves as minister.

The drama and fear of that situation illuminated some of the deep emotions surrounding guns that inspired Bishop LaTrelle Easterling to call together United Methodists for a conversation. Her call hit a nerve: the event was standing room only.

“We used every chair in the Mission Center,” said Sanjeev Christopher, the conference’s coordinator of radical hospitality.

The bishop shared how, when she was writing a response to the recent mass shooting in Las Vegas, she found herself growing weary of the horror. “The word that kept coming to me,” she said, “was ‘again. Did this really happen – again?’”

The Pulse nightclub in Orlando. Emanuel AME Church in Charleston, South Carolina. Virginia Tech. Sandy Hook Elementary School in Connecticut. These are just some of the high-profile tragedies that have been seared into the American conscience. But in the first six months of 2017 alone, there had been 154 mass shootings in the US, and these shootings accounted for just 1 percent of gun violence in America.

Yet even when events become overwhelming or make us weary, Christians are called to act, the bishop said. She reminded those present to never devalue the power and practical witness of prayer and celebrated that social holiness is one of the foundations of United Methodism.

“Our intent is to acknowledge our pain, frustration, fear sense of paralysis around this topic and discern how we, as the church, can begin to have a meaningful impact in the places God has planted us,” she said.

Some pastors in the meeting raised concerns that their congregations do not appreciate when their pastors “preach politics” and address social issues from the pulpit.

“As your episcopal servant leader, I have an expectation that our clergy engaging the issues of the day, including the difficult issues of the day,” the bishop said. She rejected the ethos that “the pew can determine what the pulpit has to say.”

“If you are preaching Jesus – Jesus crucified and resurrected and all that that means – and some of your members leave, or you have trouble paying apportionments, it’s alright with me,” Easterling said to a standing ovation.

The bishop welcomed four conversation partners to lead the discussion on gun sense: the Rev. Susan Henry-Crowe, General Secretary of the General Board of Church and Society; the Rev. Mark Schaefer, chaplain of American University; Major Sheree Biscoe, commander of the Baltimore Police Department’s Western District; and Sheriff Troy Berry of Charles County.

The panel, led by the Rev. Rodney Smothers, the conference Director of Leadership and Congregational Development, spoke about guns from their personal perspectives and then responded to questions from the 220 clergy and lay people in attendance.

‘So that we may walk in God’s path’ 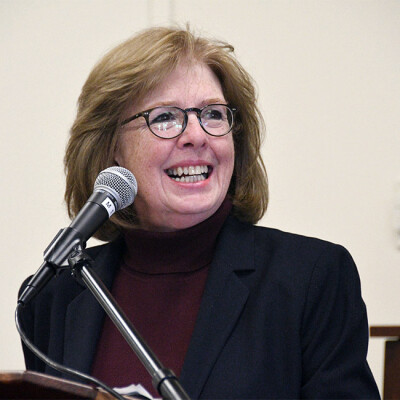 Henry-Crowe shared the United Methodist perspective on gun violence. In front of the Methodist Building in Washington, D.C., she said, is a sign that says we are praying for the victims of the Las Vegas shooting. “But not only must we pray, act,” she said. “If we remain silent, we are complicit.”

Henry-Crowe acknowledged that there are many perspectives in this conversation.

“We even come today with many different ways of not knowing what to,” she said.

The United Methodist stance on ending gun violence, she stressed, is nuanced. It is outlined in Resolution 3428 of the denomination’s 2016 Book of Resolutions and “draws on Micah’s inspiration, applying Micah’s prophetic dreams of peace to violent realities.”

United Methodists assert that God deplores violence and that Jesus calls us to be peacemakers. Guns make violence deadlier and more frequent, Henry-Crowe said. Domestic violence turns deadlier when guns are involved, and firearms are the most common method of suicide in countries where guns are prevalent.

Not every gun, or every kind of gun, is addressed in the resolution, she stressed.

“United Methodists define small arms to include assault rifles, submachine guns, light machine guns, grenade launchers, portable anti-aircraft guns anti-tank guns, among other weapons,” she said. She added, “Nations encumbered with violence from small arms face the greatest obstacles to delivering social services to those who need them the most.”

She called on United Methodists to engage in study and educate themselves and others about gun violence; to advocate and organize to address this issue nationally, internationally and in your local context; and to care for your community and the world. 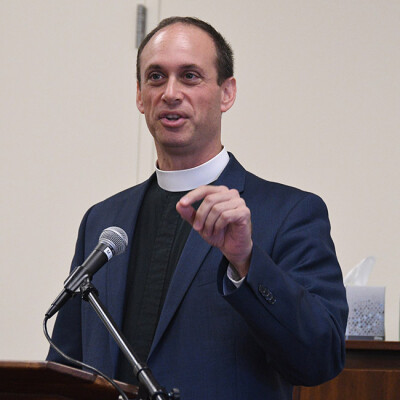 While Scripture does not make explicit reference of firearms, said the Rev. Mark Schaefer, it does have plenty to say about violence. There are some 407 verses in which swords are mentioned.

“There are certainly verses where God violence, there are verses in which violent retribution for some offenses is affirmed or tolerated, and then there are those verses that we as Christians like to rely on to counsel another way forward,” Schaefer said. These passages include the admonishment to be peacemakers and how “those who take the sword, will perish by the sword.”

“There’s something particular about the gun,” Schaefer said. “In the martial arts, by the time a person learns how to take another person’s life with their bare hands, they’ve received so much discipline and training that don’t do that. But with a gun, you don’t have any of that discipline and training. It’s powerful. It’s immediate. It’s deadly.”

In the US, at this point in our history, he pointed out, there are 112 guns for every 100 Americans. But number of guns points to a larger issue, Schaefer said. America is a country of fear, he said, which is used to sell products, to push national agendas, and to get people to tune into a news broadcast. “It’s how we get one another to do things in this country; we scare each other,” he said.

“Fear pervades our national life,” Schaefer said. “We’ve created a culture of fear. … We’re all scared, we’re feeling out of control and a firearm is an incredibly powerful tool that gives us the illusion of control; and so, we are tempted to turn to it because we want that security. The allure of that immediate, powerful and deadly tool is strong to us when we are feeling afraid.”

But in so doing we run a very real spiritual risk, said Schaefer. “It’s not the tool alone that’s the problem, but it’s the fear we have created. It’s the way we look the tool we have made with our own hands as our salvation, rather than God. It’s when we trust more in that tool than in God, whose perfect love casts out all fear.” 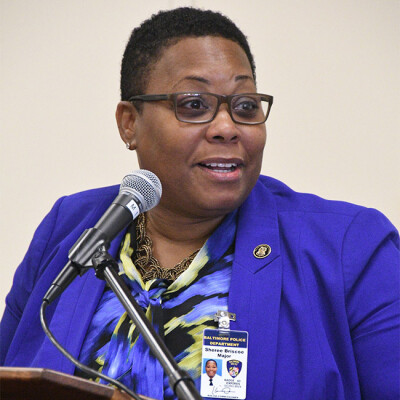 Just after that time, Major Sheree Briscoe was brought in to be commander of the Western District. A United Methodist, she brings a faith perspective to her insights from 23 years on the police force.

“The reality is that every day, urban cities are seeing an unprecedented rate of violence,” she said. How the faith community grapples with people’s right and desire to bear arms with that unprecedented violence can be an interesting struggle, said Briscoe.

Coming to terms with that struggle means understanding that crime is really a “byproduct of an ill community,” she said. The church needs to also be in conversation about mental health as it relates to guns and other issues. It needs to wrestle with the interconnectedness of all the challenges stemming from socio-economic conditions, she said, and the disenfranchisement of youth and the expectations and realities facing law enforcement officials.

There is a robust system in place for monitoring police officers’ serve as they deal with this escalating violence, she said. But Briscoe also noted that as people in law enforcement, “we collect everyone’s gum on the bottom of our shoes, and then we go home and try not to be sticky.”

She encouraged church leaders to join in partnerships with community organizations.

“Partnerships are everything,” Briscoe said. “Why reinvent the wheel? We need to do more collectively to partner and creating sustainable programming.”

The Baltimore Police Department has several programs in which pastors and can participate. She encouraged the faith community to take a more active stance in addressing gun violence.

“We are all required to take the Word of God out to the people of God,” Briscoe said. “I wear a uniform to do this.”

What vision is being cast? 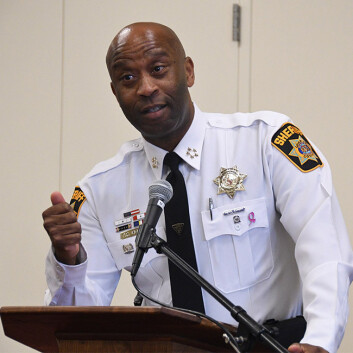 Sheriff Troy Berry of Charles County, who also serves on a state commission to look at best practices in law enforcement, warned United Methodists about getting caught up in a singular issue. Too often, people want to isolate an issue and their tunnel vision leads to inaction, he said.

Berry stressed the need for those present to challenge their elected officials to express the vision they are casting to spark a dialogue about gun violence and other substantial issues.

He also hopes United Methodists will advocate for common sense legislation, like the bill that came before Maryland legislators last year that would require toy guns to look markedly different than real guns.

“We need to champion these bills,” he said. “These toys guns are being used in actual crimes. … Why does a toy have to look like the real thing?”

In his 25 years in law enforcement, including time as a homicide investigator, Berry has come to believe that gun ownership is a privilege, not a right.

“People who have mental health issues or a propensity toward domestic violence shouldn’t have guns,” he said. “I’ve seen a lot of people who use guns for wrong reasons. That’s where the conversation starts.”

Taking aim at the violence 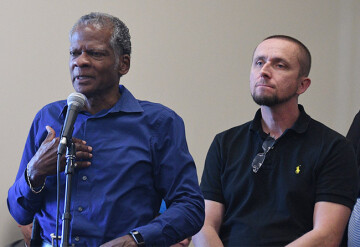 As the panel of speakers concluded their remarks, people rose to ask questions and discuss how guns and gun violence might be addressed, particularly in areas where it is hitting very close to home. For example, on the day before the Critical Conversation on gun sense, there was a shooting just blocks away from Sharp Street Memorial UMC in Baltimore. The day after, the Revs. Tiffany Patterson and Brenda Lewis led a vigil for five people shot, three of whom were killed, at a shooting in Edgewood.

Some spoke about youth and ministering to them around this issue. One after another, they came to the microphones to speak about advocating for legislation, how to best have controversial conversations, the of enforcing laws currently on the books, police responses, how issues of mental health and guns relate to one another, and how responsible gun ownership might be distorted by those who are advocates of stricter gun control.

The conversation was lively as people explored how to create a culture in which people feel free again to borrow a cup of sugar from their and build communities of respect and empathy. Gun sense was the focus of the discussion, but people delved deeper.

“What’s so interesting to me is that when Jesus encounters people, he heals them, he feeds them, he sits with them, he doesn’t preach about what they need to believe in order to get into heaven. He’s actually meeting need. That’s what is healing and transformative,” Schaefer said. “There are immediate policy things we can do, but I think unless the church is willing to engage in that deeper encounter with one another things won’t be fixed. …  If there is an institution that should be about love over fear, it’s us.”

As the conversation ended, the was given at Howard University. During that brief time, more than 100 D.C. police officers, many armed with semiautomatic rifles, searched campus buildings and classes were canceled for the day.

The conversation, Bishop Easterling said, will continue. “There are many topics worthy of deep, engaging, critical conversation.”