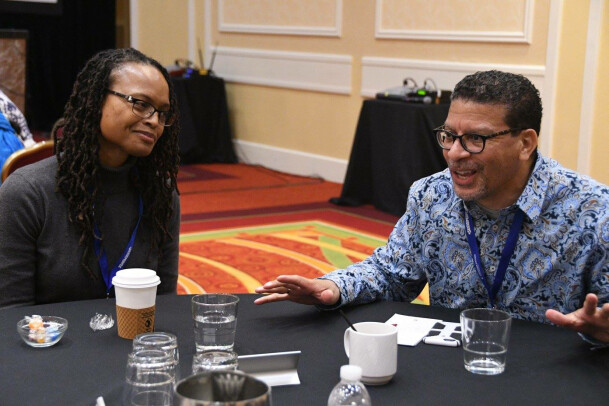 It didn’t take but a minute for people attending the reCall Summit to know what the event was about.

“Now is the time to rise up and speak truth to power about race, bias, and discrimination,” said Bishop LaTrelle Easterling of the Baltimore-Washington Conference at the start of the event. “That is our ‘why.’ That is why we are here, as spiritual people of God, to address the issues of race and multiculturalism.”

Meeting at the Marriott Hotel near the BWI Airport, more than 100 people from across the Northeastern Jurisdiction came together to learn how to reimagine, redefine, reposition and – most importantly – respond to issues around race.

The Summit was co-sponsored by the BWC and the Multi-Ethnic Center for Ministry of the Northeastern Jurisdiction. Delegates at the 2016 Jurisdictional Conference pledged to work intentionally to “fight the scourge of racism” and unanimously approved a “Call to Action” resolution that called upon the church to do more to fight discrimination, to confront racism and to affirm that all lives matter in God’s eyes.

Under the leadership of the Rev. Debra Mumford, the Frank H. Caldwell Professor of Homiletics at Louisville Presbyterian Theological Seminary, participants at the reCall Summit came away with a foundation for prophetic race ministry in their own unique context.

To set the conversations, Mumford began with a condensed history of slavery in the United States. “Make no mistake: it was all about money,” Mumford said. She also noted the “slave prosperity Gospel,” which was espoused first by Cotton Mather in his 1706 essay, “The Negro Christianized.”

Mumford also touched briefly on the Civil War and its monuments and statues, over which many people are debating to this day. “The remnants of the Confederacy are still with us,” Mumford said, noting the flags of Mississippi, Florida, and others, and buildings, roads and schools named after Confederate generals.

In table groups, participants tackled hard questions: “What racial history needs to be taught at your church? How might your church become involved in the removal of Confederate monuments from public spaces?” Mumford pushed back to anyone thinking that merely asking the questions was enough. “Make sure you have action steps to put these thoughts into motion,” she said.

In another session, Mumford shared an hour-long video, part of a 2003 PBS series, “Race: The Power of an Illusion.” The video explained how race is not a biological reality but a social invention. It also showed how economic realities based on race affected housing affordability and procurement after World War II for African-Americans, a practice known as “redlining.”

After more table group discussion, the Rev. Marlon Tilghman, pastor at Ames UMC in Bel Air, shared how he saw the video as a call to action for the church.

“The church needs to be involved in legislation,” he said, “because legislation is what created these systems.”

The topic of fear was widely discussed, about how it is used to motivate, persuade and enable people to act in certain ways.

“Fear is as old as the book of Exodus,” said the Rev. Wanda Duckett, superintendent of the Baltimore Metropolitan District. “There’s been this fear, since the times of slavery, that ‘If they ever get together, they’ll figure something out.’”

Duckett said that having these conversations around race necessary but difficult. “It’s easier to be with people who look like you,” she said. “It’s not simple work.”

On Saturday morning, Mumford looked at the Rev. Martin Luther King Jr.’s “radical side,” she said, to see what lessons people could learn. This was the time when King protested the Vietnam War, she said, and when he practiced voluntary suffering.

“Remaining silent in the face of an injustice was not an option for King,” Mumford said. “He was against the war for a myriad of reasons. In its face, he called for a revolution of values.”

Mumford also walked participants through the platform for the Movement of Black Lives. This multi-page document contains six major points, she said, from addressing reparations to economic justice to ending the war on black people.

“Are there Black Lives Matter chapters in your town?” Mumford asked. “Can you partner with them? Can you invite them to come and speak at your church? What goals of the platform can you get involved in?” 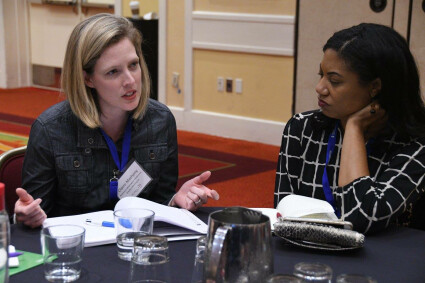 Several participants spoke of the concrete action steps they will undertake in their church. One example was from the Rev. Claire Matheny, associate pastor at St. Paul’s UMC in Kensington, who is a native of Memphis, Tenn. She said that next April 4, on the 50th anniversary of King’s assassination, she plans to be in her and was looking for people to go with her on an educational pilgrimage. She also asked that the conference put together a Lenten devotional around the 50th anniversary to help people observe, study and act upon King’s legacy.

“This Summit is necessary because we have to live at the intersection between theology and social construct,” said Bishop Easterling in an interview. “We have to understand the history of this country and how it informs our systems and thinking, even who we are as Christians.”