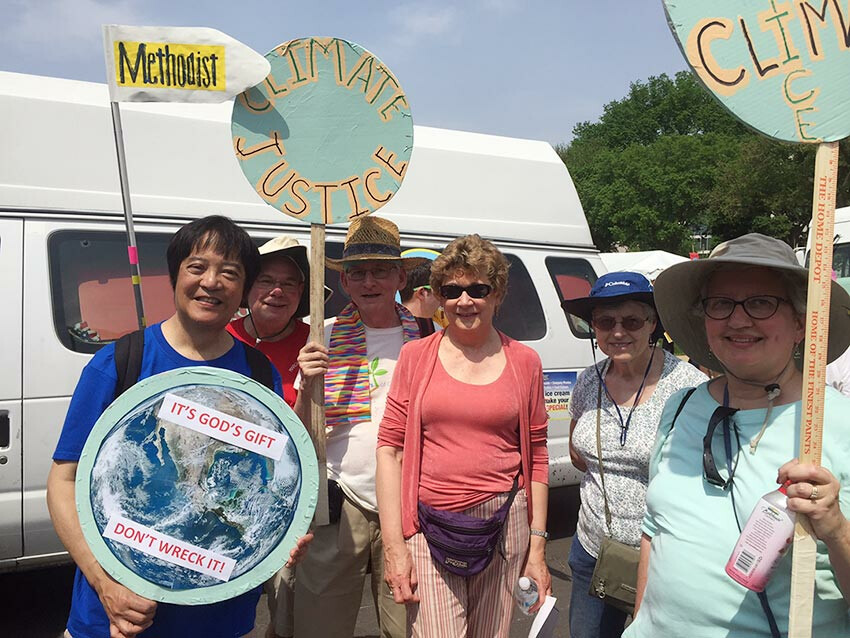 An estimated 200,000 people converged on Washington, D.C., April 29, for the Peoples Climate March. United Methodists added their voices to the march, which addressed the crisis of global warming, and protested what many see as policy changes by the Trump administration that will harm the environment.

What The United Methodist Church says:

We acknowledge the global impact of humanity’s disregard for God’s creation. Rampant industrialization and the corresponding increase in the use of fossil fuels have led to a buildup of pollutants in the earth’s atmosphere. These “greenhouse gas” emissions threaten to alter dramatically the earth’s climate for generations to come with severe environmental, economic, and social implications. The adverse impacts of global climate change disproportionately affect individuals and nations least responsible for the emissions. We support of all governments to require mandatory reductions in greenhouse gas emissions and call on individuals, congregations, businesses, industries, and communities to reduce their emissions. (2016 Book of Discipline, Social Principles)

Starting with an interfaith prayer service on the steps of the United Methodist Building on Capitol Hill, hundreds of United Methodist marchers braved the scorching 91-degree heat carrying signs saying “There is No B,” “I’m with her (with an arrow pointing to an image of the earth),” and “It’s (the earth) God’s gift; don’t wreck it.”

From there, United Methodists joined the thousands who gathered behind the U.S. Capitol and marched down Pennsylvania Ave., around the White House, and ended at the Washington Monument.

Sung-ok Lee, Assistant General Secretary for Christian Social Action for the United Methodist Women in New York, said she was at the march to call for climate justice.

“We are calling on the current administration to devote and commit to stopping the global warming process that is going on,” Lee said. “We would like to see more done to protect the environment and God’s precious creation.”

Lee, a Deaconess appointed by the New York Conference to the UMW, said that climate justice was one of four key issues they are working on for the next four years.

“We are on track to address the various issues within climate justice, including environmental racism. The most vulnerable communities are paying for the carbon emission that is happening,” she said. Other issue priorities for the UMW include maternal and child health, ending of communities of color, and economic inequality.

The march happened just hours after the Environmental Protection Agency (EPA) removed most of its references to climate change on its website. According to CNN, the EPA issued a press release stating that language on the website was being updated to "reflect the approach of new leadership." EPA director Scott Pruitt was quoted in March as saying that he didn’t believe carbon dioxide emissions were a “primary contributor” to global warming.

The Rev. Ben Roberts, Director of Social Justice Ministries at Foundry UMC in Washington, said that his church has, for the last several months, intentionally worked on ways the congregation can engage with current social issues. This ministry is called “Sacred Resistance.” Roberts said the march was just one aspect of what they’re doing on climate justice.

“We’ve had multiple members go through the caretakers training,” Roberts said, “and they are here and marching. What they’re learning they are bringing back.”

For Roberts, the issue is personal. He grew up on an island in North Carolina. “I’m a surfer, and it’s much better when it’s not trashy and your house isn’t ,” he said. “What I grew up with is rapidly changing and disappearing. I would like there to be a world worth leaving when I do finally leave.” 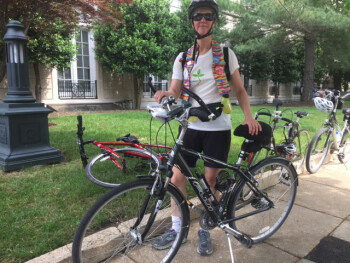 One of those caretakers is Jill Barker, a member of Foundry who proudly called herself “a newly minted United Methodist Earthkeeper.” To be an Earthkeeper, she said, involved several days of Bible-based study on and the Christian’s duty to care for it.

“Earthkeepers are United Methodists who are keenly aware of the ecological challenges in our world today and feel called to be part of a movement to transform the world,” according to the grassroots organization, Caretakers of God’s Creation. The Earthkeepers program is offered by Global and involves both advocacy and community outreach.

Earthkeepers are lay and clergy, Barker said. Each Earthkeeper, to be certified, must develop a project in their local community. Barker’s project where she lives in Arlington, Va., deals with energy efficiency and the need for the church to step in and provide this for the poor.

Jim Quinn, a member of Dumbarton UMC in Washington, worked for the Department of Energy for 35 years with a focus on renewable energy. His work took him to Europe, India, China, and several other countries. 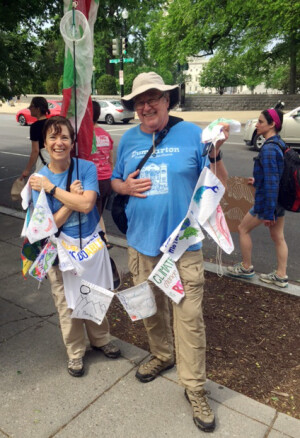 “Climate change is happening,” he said. “Over the past 20 years, we have had several of the hottest days recorded since the 1800s.”

Quinn said that he was at the march to add his voice to the message that changes need to be made.

“We think that the only way that we’re really going to do something about this is to all ,” Quinn said, “to get a critical mass of people who are going to understand what the problem is and take action.”

Quinn said the United States needs to start by looking at its economy and how it is based on fossil fuels that emit greenhouse gases. Instead of using coal or petroleum-based products for energy, he would like to see the country move to more energy efficient sources, such as solar and wind.

“We’re not on a good trajectory in the U.S.,” he said. “We should be weaning ourselves away from coal, away from fossil fuels. Even when we do (use them), they should be extremely efficient.” Quinn said that fossil-based fuels have an efficiency of about 33 percent – meaning that only about a third of the possible energy in a unit of coal is extracted. Increased efficiency would lower carbon dioxide emissions. 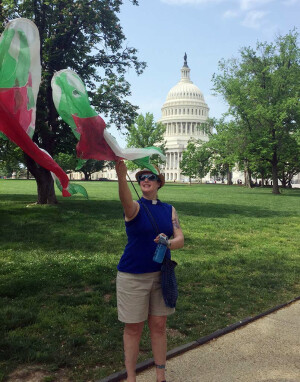 The Rev. Dottie Yunger, at Solomons UMC, brings a unique perspective to climate justice. A trained marine biologist, said that she has always understood her call to be taking care of God’s creation.

“By that, I mean all of God’s people and all of the critters, the systems, the watersheds,” she said. “I’m here today to show my support for all of God’s creation.”

said that people at her church, located in southern Maryland on the Patuxent River, see the effects of climate change every day: erosion, rising sea tides, and flooding.

began her career as a marine biologist at the Smithsonian’s Natural History Museum, just steps away from where the march began. She entered this field, she said, because she cared about creation.

“But I was also a United Methodist,” she said, “and those two worlds would never intersect. I never heard anything on Sunday about caring for creation, and at work, it was not cool to be a scientist and a person of faith.”

But then God had other plans.

“Being a minister is the way for me to embrace both of those calls in my life,” Yunger said. “Today’s march is a beautiful expression of all of those worlds coming together.”