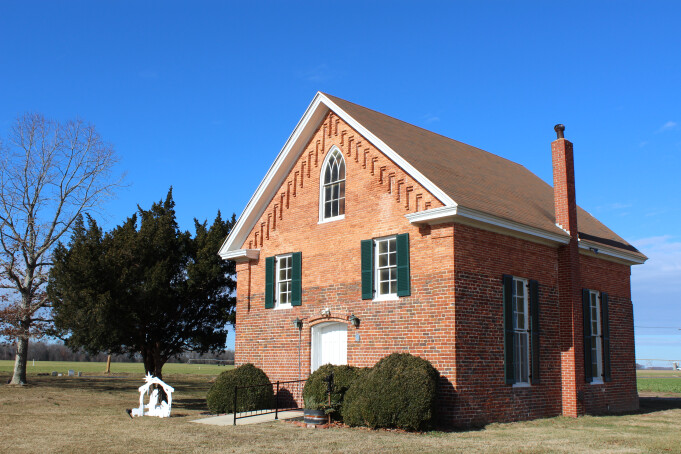 On the edge of Queen Anne’s County, Maryland, close to the geographical center of the Delmarva Peninsula, stands a tiny but significant sentinel of Methodist history.  If walls could speak, the stories these could tell would surely make for a dramatic miniseries.  It’s not the first purpose-built Methodist house of worship in America (an honor that goes to Barratt’s Chapel in nearby Delaware); nor is it the oldest Methodist church building (St. George’s, Philadelphia).  But among the houses of worship in the Wesleyan family of denominations, there is no place which has been a site of continuous service than that occupied by little Bridgetown Church: certainly in the Mid-Atlantic, and quite possibly in the world.  Yet cruising along Highway 304 outside of Centreville, it would be easy just to pass by in the blink of an eye.

Flashback to 1640. The Province of Maryland, an English colony sandwiched between Virginia to the south and Dutch New Netherland to the north, was just eight years old, its charter having been granted to George Calvert, the first Lord Baltimore, in 1632. Only seven years had passed since its first colonists, arriving on the Ark and the landed at St. Clement’s Island.  The Stuart monarch Charles I, who ruled over the Three Kingdoms (England, Wales, and Scotland), was about to lead his realm into a series of conflicts we know as the English Civil War, which would presently cost Charles both his crown and his head.  Ironically, the last engagement of that faraway conflict, a little skirmish as the Battle of the Severn, would be fought in 1655 just 40 miles away at the Puritan settlement of Providence, now a part of Annapolis called Eastport.

But in 1640 all of that – and most of what we think of as American history – still lay in the future.  Maryland, its economy based on profitable tobacco cultivation and uniquely friendly among English colonies in its treatment of Roman Catholics, was in the midst of rapid settlement.  A multitude of new arrivals, whose demand for cheap labor was supplemented by enslaved persons from Africa and the West Indies, poured into the colony along with indentured servants and felons from the mother country.  With population growth came the need to provide for the spiritual welfare of the new communities sprouting up; so new parishes were laid out on the map, and new chapels and churches were erected on the ground.  Thus it was that a log auxiliary meeting house or “chapel of ease” for St. Paul’s Church (Centreville), the local parish of the Church of England, was built along the banks of the Long Marsh Branch (now Mason’s Branch) of the Tuckahoe River.  Known then as Tuckahoe Chapel, it served the needs of a growing community some twelve miles away from the main parish church, including the little village of Nine Bridges.  In 1717, repairs were made to the log building at a cost of 1,100 pounds of tobacco (which was traded as currency at that time); and in 1737, it was enlarged as part of the new St. John’s Parish created out of the southeastern part of St. Paul’s, another testimony to the growth of the community.

By 1768 there was a need for a new, more permanent structure to be the center of St. John’s Parish. An Act of the General Assembly authorized the construction of a brick church, which was completed in 1773. 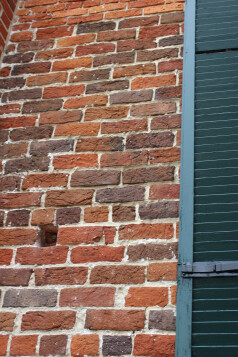 at a cost of £1,075 “Pennsylvania current money.”  Part of the original walls of this building can still be seen, laid in an unusual all-header bond (only ends of the brick visible), using a lime mortar for which 1600 bushels of oyster shells had been brought up the river.  It also had an upstairs gallery at the rear of the sanctuary, the doorway for which was approximately where the left window is at present.  The gallery was used by the enslaved blacks connected with the parish, who were probably required to stand for the duration of services, as there seems to have been no seating provided.

The Anglicans did not stay long in their new building, however, as with the coming of the Revolutionary most of their priests fled to England. Anglicanism, with its connection to the crown, was suspect; and the new State of Maryland confiscated the property.  It was transferred to the Presbyterians first, then in 1778 to the Methodists.  By this time Nine Bridges was known as and had become a thriving, even booming, community.  Centered on a tobacco warehouse, the town also boasted a hotel, general store, post office, and tavern, along with artisan shops such as a wheelwright and a bootmaker.  Francis Asbury, bishop apostle of American Methodism, visited the town to preach a funeral in 1777, though we do not know whether the service was held in the Bridgetown Church.  The property, meanwhile, from 1784 became part of the Queen Anne Circuit of the Methodist Episcopal Church.

The nineteenth century brought many changes.  Accounts from the 1820s and 1830s suggest that the church had fallen into disrepair (even allowing for some “sour grapes” on the part of the dispossessed Anglicans, by this time called Episcopalians, making the reports).  Substantial repairs were made in the 1840s and 1880s.  The coming of the railroad also heralded the community’s decline, as Bridgetown was bypassed in favor of nearby Greensboro.

With the north-south split in the Methodist Episcopal Church in 1844, Bridgetown remained part of the northern denomination.  This did not, however, translate into a welcoming atmosphere for persons of color. Though the MEC was officially anti-slavery, attitudes on Maryland’s Eastern Shore were divided on the subject, with many remaining pro-slavery (and during the Civil War, pro-Confederate).  Slave dealers, though not well-regarded, became prominent and feared figures in many communities due to their wealth and political connections.  One such trader in human lives resided just across the creek in Bridgetown, even using his house as a staging point for captives he planned to “sell south” to Georgia and as far as New Orleans.  (He is rumored locally to have been part of a network of particularly notorious traders who kidnapped slaves and free blacks to transport south into but hard proof of this appears to be lacking.)  He died in 1864 and was buried in the churchyard.  While one historical account refers in sunny terms to his “repenting” and “finding peace”, local lore has it that the burial was controversial at the time, precisely because of Methodism’s commitment to abolition, which was well-known.

The collapse of part of a wall from storm damage necessitated major repairs; and in 1887, the church began a series of significant repairs.  Parts of the outside wall were rebuilt with the original brick from the colonial era, supplemented with a lighter-colored nineteenth-century brick.  Unlike the lower courses, these appear in what is known as American or “common” bond, suggesting that the intention was that the church’s exterior should be painted, which it was (in white) for many years.  The upper level of the exterior was completed with a decorative Victorian in brick.  At the same time, in line with a post-Civil War recommendation of the annual conference, the church’s trustees removed the gallery from the interior.  A second remodeling of the interior took place in 1954; further work restored the building’s natural brick appearance in 1972.  In 1984, the church was featured on tours related to the bicentennial of Methodism; and the Peninsula (now Peninsula-Delaware) Conference approved Bridgetown’s nomination as a United Methodist Historical Site.  Bishop Joseph Yeakel presided at a 1985 ceremony unveiling a historical marker. 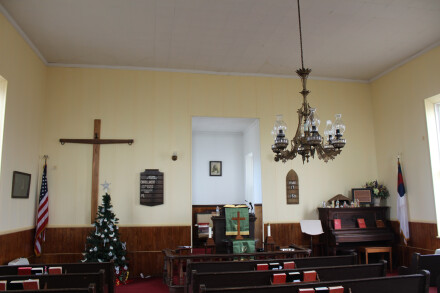 After many years as a congregation meeting twice monthly with an attendance around 30 worshipers, led to the church’s becoming a “limited-service” facility in 1991, available for occasional special services.  It was also open as a wayside prayer and fell victim to theft and vandalism.  In 2010, however, changes in leadership and new residential construction in the vicinity led to an effort to move the church back to weekly services, including the installation of a ramp to aid accessibility.  Weekly services began anew on Easter Sunday, 2011, and have continued since that time.  Currently, the church is officially a satellite facility of Ridgely UMC on the Ridgely-Thawley’s-Bridgetown Charge.

Bridgetown’s sister churches on the charge are of interest in their own right.  Ridgely, the largest of the three and located in the heart of the town by that name in Caroline County, is a Victorian-era structure dating to 1895.  The attractive wooden truss structure on the interior brings to mind Alpine models from or the timbering of sailing ships.  It also has its original embossed-leather wainscoting on the walls, beautifully maintained.  Thawley’s Chapel, erected by the old Methodist Protestant Church, stands in a rural area outside Denton.  Erected in 1865, in the closing months of the Civil War, it retains the original tin interior paneling on its walls and ceiling.  If you visit, make sure you take note of the gallery, which was never removed.  The gallery’s floor slopes upward toward the rear wall.  Like tiered balcony seating, this aids the view of the persons seated in the back; yet the slope is steep enough that it was clearly designed to make the worshipers in the gallery, who would have been people of color, uncomfortable.

Today, all three churches on the charge are staging something of a comeback, and participate jointly in local community ministry.  The story of Bridgetown’s return from near-oblivion is particularly inspiring, and a testimony of the faithfulness of the One who said, “Behold, I make all things new.”

One side note for those who find such things tantalizing: there have been reports in recent years of paranormal activity at the Bridgetown Church, clearly connected with the community’s slaveholding past. At present, however, these occurrences seem to have resolved, leaving a quiet and deeply historic sanctuary for the worship of the living God.

Bridgetown Church is located on Maryland Highway 304, just east of the junction with Highway 405 and just west of the Queen Anne’s - Caroline County line, in the Henderson ZIP Code area.  To visit the church coming from the west, take US 50 across the Chesapeake Bay Bridge and follow US 301 at the split.  Go past the exit for Maryland 213 (Centreville / Wye Mills) and take the exit for Maryland 304 east.  The church is just a little more than 10 miles east, on the left.  (Caution to GPS users: satellite data will take you beyond the church and toward Ridgely.)  The charge office is at Ridgely UMC, 109 Central Avenue, Ridgely. Telephone (410) 634-2527; email .  Pastor Joe Smith is very welcoming of visitors.  It is best to make advance arrangements to see the interior of the church.

Bridgetown is about 10 miles from the Delaware state line and about 40 minutes’ drive from Barratt’s Chapel and sights in Dover.  It is also about 40 minutes from Annapolis, or 50 minutes from St. Michael’s, Maryland.  Food is available locally at the popular 9 Central Diner in Ridgely (6 miles).  In addition to the towns listed above, accommodations are available in Denton (14 miles).

While coming into the Wesleyan fold may appear an accident of Revolutionary history, there is nothing “accidental” about its ministry of witnessing presence or its place in the heritage of Delmarva Methodism.  Its renewed spirit is also a reminder that truly, “with God all things are possible” and that we must ever be ready, in the words of Revelation 3:2, to “awake, and strengthen what remains.” 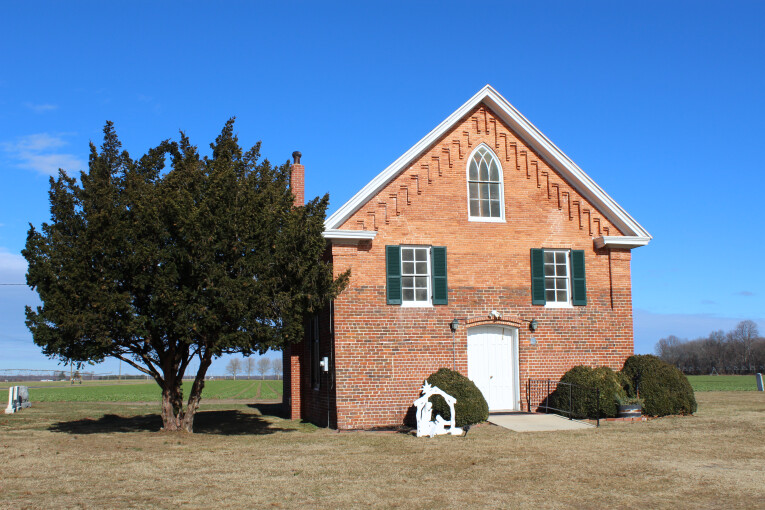 This church was built by Tomas Hardcastle of Castle Hall according to the History of Caroline County from the beginning by Edward M. Noble. Do you have any information on this?


Greetings, Lisa. I will check my source material and see what I can find.

I was raised in that Church and helped sandblast the white paint off the brick in the early 70’s. We all believed that the bricks were ballast from barges coming up Mason’s Branch.
I believe the salve trader you refer to was Marcy Fountain.
I have never heard any reports of paranormal activity in the Church or Church Yard.
It is very possible that Frederick Douglass attended services there at some point in his enslavement.