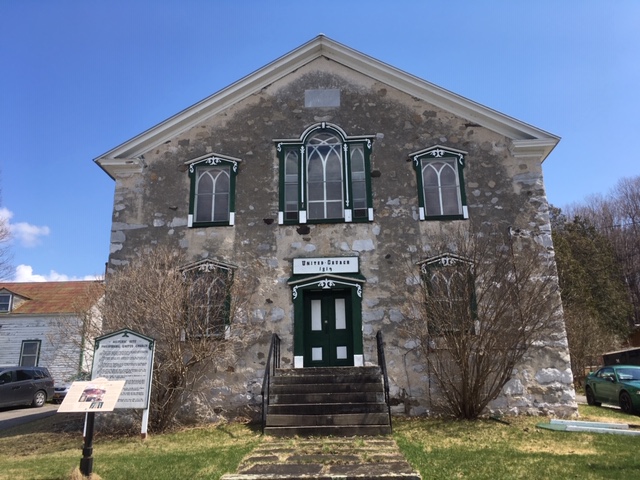 Monique’s and Joseph’s new bedroom has something that few couples can boast: graffiti, now 180 years old, carved into the woodwork by British soldiers who were billeted there.  That’s because the new residence was, until just a few years ago, the Philipsburg United Church, part of the Bedford Pastoral Charge and, until recently, the oldest Methodist church building still operating as such in Quebec.  The congregation has discontinued, but the legacy embodied in its walls still speaks to the knowing traveler.  And how is it that a private home, once a church building, was quartering men in red coats? Read on. 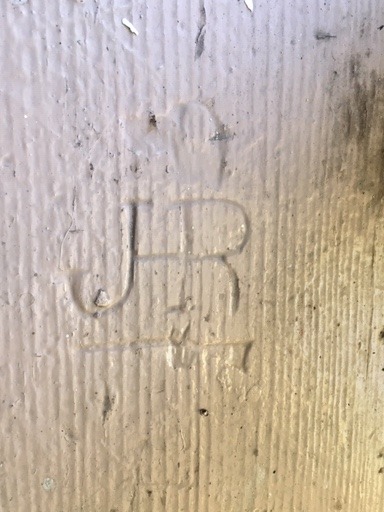 Graffiti carved in the nineteenth-century by British soldiers billeted in the church.

Located just two miles north of the border with Vermont along the shore of the Bay of Missisquoi (a northern arm of Lake Champlain), Philipsburg, established in 1784, was the first settlement in the area and once known as the “gateway to the townships.” The Eastern Townships of Quebec, then called Lower Canada, were settled by “Tories” – or United Empire Loyalists, as they are known there – who fled north during the American Revolution or just afterward.  In 1819, settlers erected a building for the meetings of the Methodists in the community.  A strong structure with stout stone walls at the top of the town’s main street, Philipsburg Methodist was designated a “garrison church,” able to double as a fort or barracks in time of emergency.  That actually happened twice.  The first time was in 1837, during the Battle of Moore’s Corners (now St. Armand) in the course of the Lower Canada Rebellion, when British militia quartered there and it served as a depot for food and ammunition.  Soldiers’ initials and other marks from the 1830s are still clearly visible, carved into the wood panels of the gallery above the sanctuary, where the bunks once stood.  Again in 1870, the church, which at the time had a commanding view of the bay from its front doors and windows, served as a strong point during a failed invasion of Canada by the Irish Fenian Brotherhood. 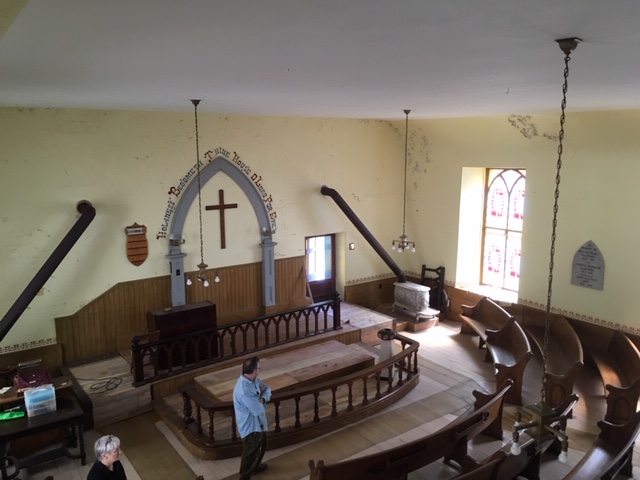 In the first half of the nineteenth century, two main offshoots of the faith of the Wesleys vied for prominence in Canada.  The Episcopal Methodists, whose organization traced its beginnings to Francis Asbury and vigorous American preachers who came up from “south of the border,” were strongest in Upper Canada (today’s Ontario), where they grew into the largest Protestant denomination in that region.  Lower Canada and the Maritime Provinces were harder fields of service, and there the British Wesleyans predominated, drawing their support, leadership, and political from England.  Philipsburg’s Methodist classes were first organized by circuit riders from the New York Conference in 1799.  One of the early class leaders was Samuel Embury, son of the Philip Embury who with Barbara Heck organized the first Methodist society in New York City.  With the outbreak of the War of 1812 between Britain and the United States, American preachers were enemy aliens in Canada, and Philipsburg was served by preachers connected with the British Conference.  The two branches of Canadian Methodism came together mid-century. Much later, in 1925, they joined with Presbyterians and Congregationalists to form the United Church of Canada. 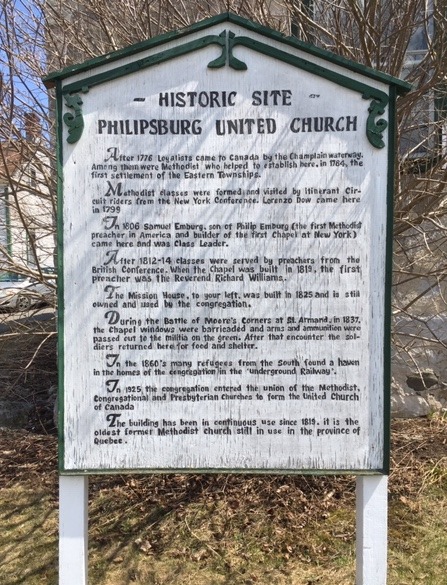 Philipsburg is significant in African-American history, in two ways.  A short distance from the town is a rocky promontory, next to which lie the graves of many blacks who came north as enslaved persons with their Tory masters.  (“We Canadians like to think that we never had slaves,” said a local resident when I visited, “but it isn’t so.”)  Today the site is on private property, but media attention in the summer of 2018 created new interest in this aspect of Canadian (and American) history.  In the early 1860s, the community was a waypoint on the Underground Railroad, as black Americans fleeing slavery found refuge in the homes of the members of Philipsburg Methodist Church.  Local lore says that this fact was kept very quiet at the time, as people were afraid of reprisals by of escaped slaves coming from the States.  The newly liberated black men and women, meanwhile, stayed in Philipsburg but a brief time before journeying on to Montreal and settling in communities of free blacks across Canada.

In earlier times, Philipsburg was the leading church on its circuit, sending out missionaries to plant other faith communities as far away as Sherbrooke, 80 miles to the east. A manse (parsonage), also used as the Mission House or education building, was built adjacent to the church in 1825; it still stands today.  The congregation boasted a large junior choir; its size was such that an internal remodeling was necessary to accommodate the crowd.

By the 1980s, however, the congregation was in its final decline. After three years without pastoral leadership on the charge, the membership had dropped to seven persons, and the Bedford Charge made the decision to close the church and to sell the site.

Last spring, I had the privilege of visiting new owners Monique and Joseph at their home in and touring the church site in Philipsburg as their guest.  At that time, little had been done physically to change it from a house of prayer into a private residence.  Though not of Methodist background themselves or from the Eastern Townships region, they carry a strong interest in the history of the and a sensitivity to the significance of Philipsburg Church and the area’s heritage generally.  For instance, they have chosen,   contrary to the suggestion of local residents, not to demolish the 1825 manse / Mission House, but to refurbish the structure.  This has not been the outcome for every historic Methodist building in the area. 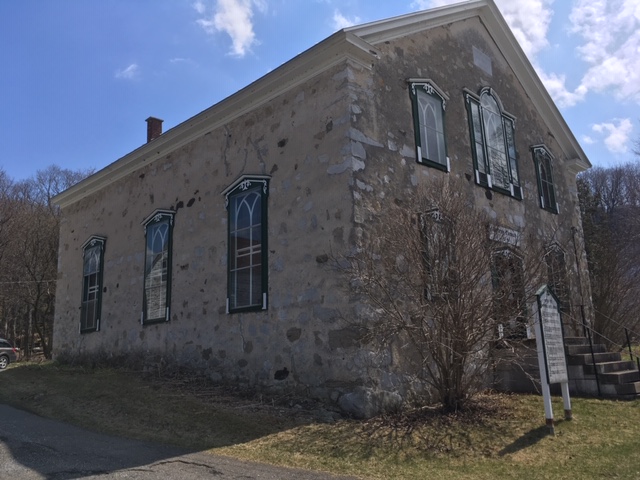 Philipsburg Church is located at 194 Montgomery Street, Saint Armand, Quebec J0J 1N0, adjacent Royal Canadian Legion.  Interpretive historic signs stand in front of the church building.  There is no public office or visitors’ facility and there are no restrooms available at the location.  Please remember and respect that this is now residential property.  Overnight accommodations may be found in nearby Venise-en-Québec (20 km / 15 minutes) and in the USA at St. Albans and Enosburg Falls, Vermont (about 20 miles).  While in the area, check out the delicious local cheeses and Québec delicacies at the Fromagerie Fritz Kaiser (459 Chemin de la 4e Concession, Noyan), or the Fromagerie Missiska (400 Rue Wheeler, Bedford), as well as the lovely farm countryside of the Eastern Townships.

While from one perspective it’s regrettable that the community is no longer sustained spiritually by a thriving Wesleyan fellowship, we can give thanks that the church still stands as to a vibrant Methodist past and a monument to a community that became a haven of liberation. Its presence may yet be an inspiration to future generations to take up spreading Scriptural holiness and doing “all the good they can.”