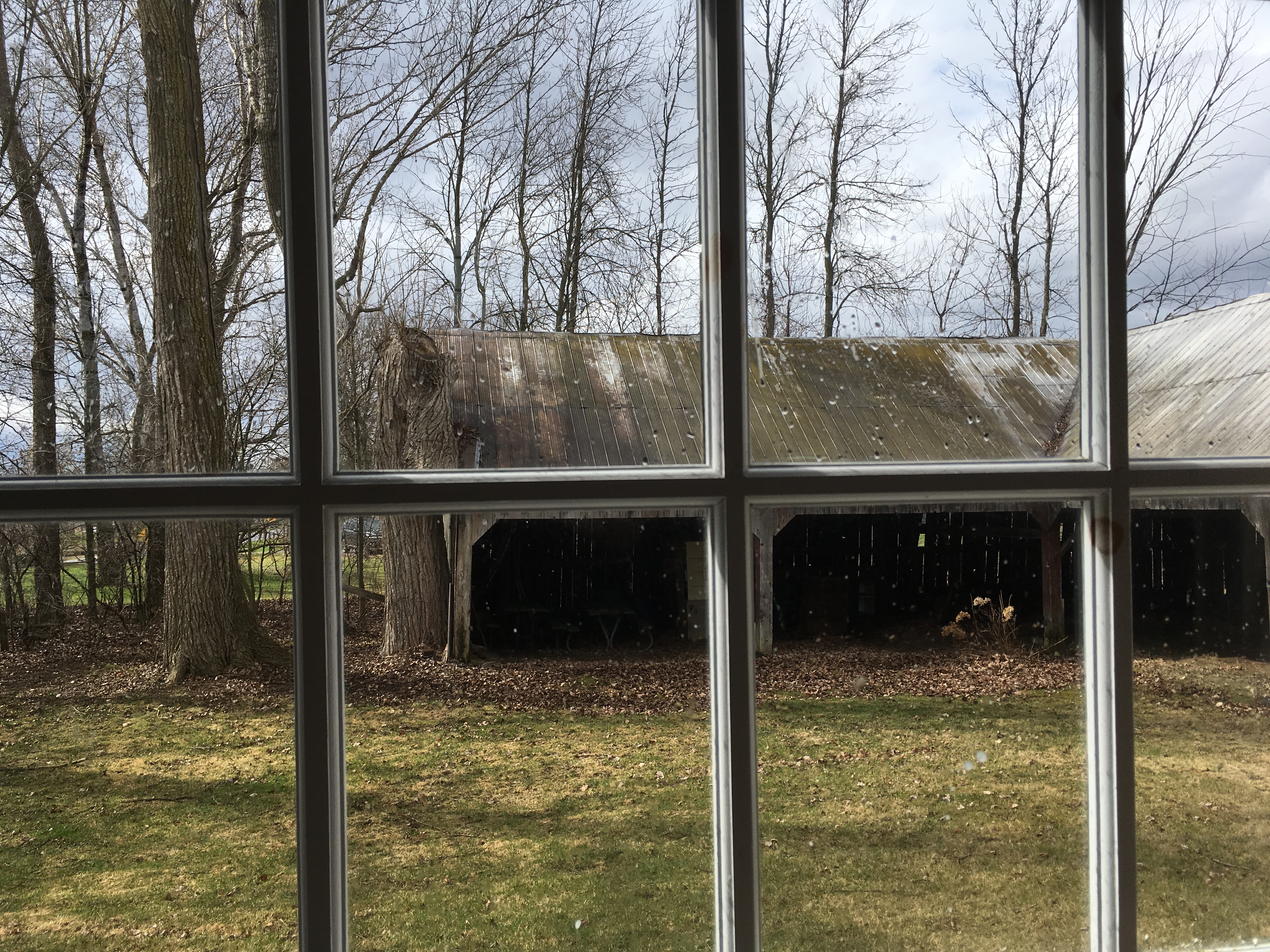 If your travels take you to upstate New York or northern Vermont, it might just be worth your time to slip across the frontier to where some significant landmarks of Canadian Methodism await the modern “circuit rider.” One of these is the Odelltown Church, located in the Lacolle township of southern Quebec. (The other I’ll write about in another article.) Barely a five-minute drive into the province, Odelltown played a role in two conflicts that shaped the lives and destinies of families in both countries.  It is also a rare surviving example of how Methodist chapels appeared and functioned in the middle of the 1800s.

Odelltown is a small, unincorporated hamlet just south of Lacolle’s town center. It takes its name from Joseph Odell, Sr., a “Tory” from the Hudson Valley who moved with his family to the area in the aftermath of the American Revolution.  (The name Odell, incidentally, is pronounced like “” without the “y.”) Mr. Odell’s loyalty to the crown had created serious problems for him in New York. But north of the border he a United Empire Loyalist, and received land in Quebec, then known as “Lower Canada,” where he and his children settled.  A small community grew up around the Odell family, and the stone farmhouse that Odell’s third son, another Joseph, built in 1801 still stands today along provincial Highway 221.  The area was the scene of two battles during the War of 1812 between invading American forces and British defenders, both of which ended in British victories.  The second of these, in June of 1814, took place where the church now stands.

The Odelltown Methodist Church was built from 1823 to 1825.  The stately stone structure stands on a small rise just west of the road, which was once a major artery connecting the Champlain region with Montreal to the north. Like many period chapels, Odelltown Church has both upper and lower courses of windows, though it is essentially a one-story building with an upstairs gallery in the rear.  A belfry caps the front of the building over the lovely Gothic-style entrance doorway of textured wood.  There has never been a bell at Odelltown Church, however: the one cast for the chapel was sold to another congregation whose own bell had been damaged, and a replacement was never purchased.  Of particular note are the stables surrounding the chapel on two sides: these were common in the 19th century in colder climes, but at most other chapels remaining from that period, they have long since fallen down or been removed.  Odelltown’s complete structure is a rare exception.  The original parsonage also survives on an adjacent lot, though it has been assimilated as part of a larger, more modern house that is not open to the public. 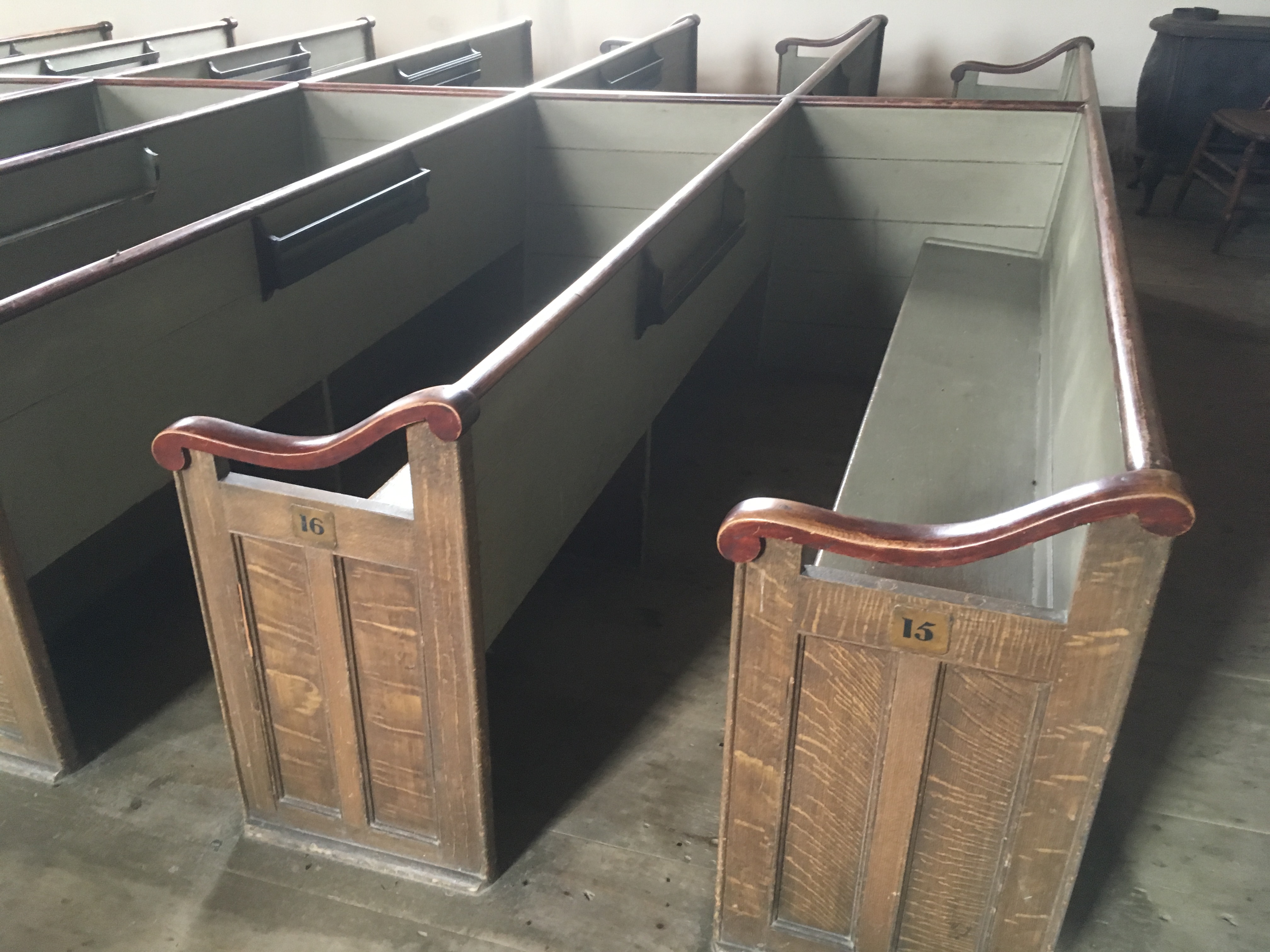 The interior follows the simple yet elegant plan of early Protestant chapels in this part of Canada.  Box-type pews take up the main part of the sanctuary, with a second set perpendicular to the pulpit and chancel rail.  (The pews are all numbered, presumably to allow for rental at one time.)  A central, raised pulpit stands within the chancel rail with stairs and banisters on either end.  Behind the pulpit on the wall are a pair of painted columns and a trompe l’œil geometric pattern that gives the viewer an illusion of there being an apse or extra space behind the pulpit as there would be in traditional European churches. Above the a painted banner reads, “Thy way O God is in the sanctuary,” a quotation from Psalm 77:13.  Along the walls, a decorative with raised stucco completes the ornamentation.

The building has no electricity or running water, but hovering over the sanctuary are two chandeliers, both replicas as the originals were stolen some years ago.  These would originally have burned whale oil to provide light.  Heat for cold Canadian winter days came from twin woodstoves sitting in cutouts at the rear of the sanctuary, positioned to allow for stoking from the narthex.  Mr. Don Robinson, the leading trustee of the old chapel from the Lacolle United Church parish and my gracious guide for the visit, shared with me his recollection from having grown up at Odelltown.  He said that the ideal was to sit in the middle of the church: sitting too far forward or too far to the rear would make worshipers liable either to freeze or to cook when the outside temperature was very low and the stoves were going.  (I wondered what effect this might have had on the circuit since the pulpit is on the opposite end from the stoves: would the sermons be shorter, or the preachers livelier in hopes of keeping warm?)

Historical photographs, plaques, and displays adorn the walls, including a list of the appointed ministers from 1825 to 1922.  A room adjoining the narthex contains period artifacts of a practical nature such as harnesses and tools for harvesting ice.

The building became the scene of armed conflict once more in 1838, during the uprising known as the Lower Canada Rebellion.  Following a failed series of efforts at effecting political reform in the 1830s, revolt broke out among some of the frustrated locals in an effort to establish an independent republic in Lower Canada.  In 1838 a force, led by Quebecers but planned and launched from the United States (in violation of U.S. law), attempted to force an uprising.  The rebels (“”), though greatly outnumbering the British regulars and their local militia (“volunteers”), had planned poorly and were no match for the weapons and professionalism of the King’s troops.  They took refuge behind the stone walls of the Odelltown Church, which was damaged in the engagement, before surrendering in what proved to be one of the last battles of the rebellion.  Commemorative plaques about the battle are on display in the church and in the yard outside, along with a small cannon said to be the only one in the ’ possession at the fight.  (The first shot went over the heads of the advancing British; after re-aiming, the second shot fell short and hit the dirt; there was not for a third before the King’s men were on them.) 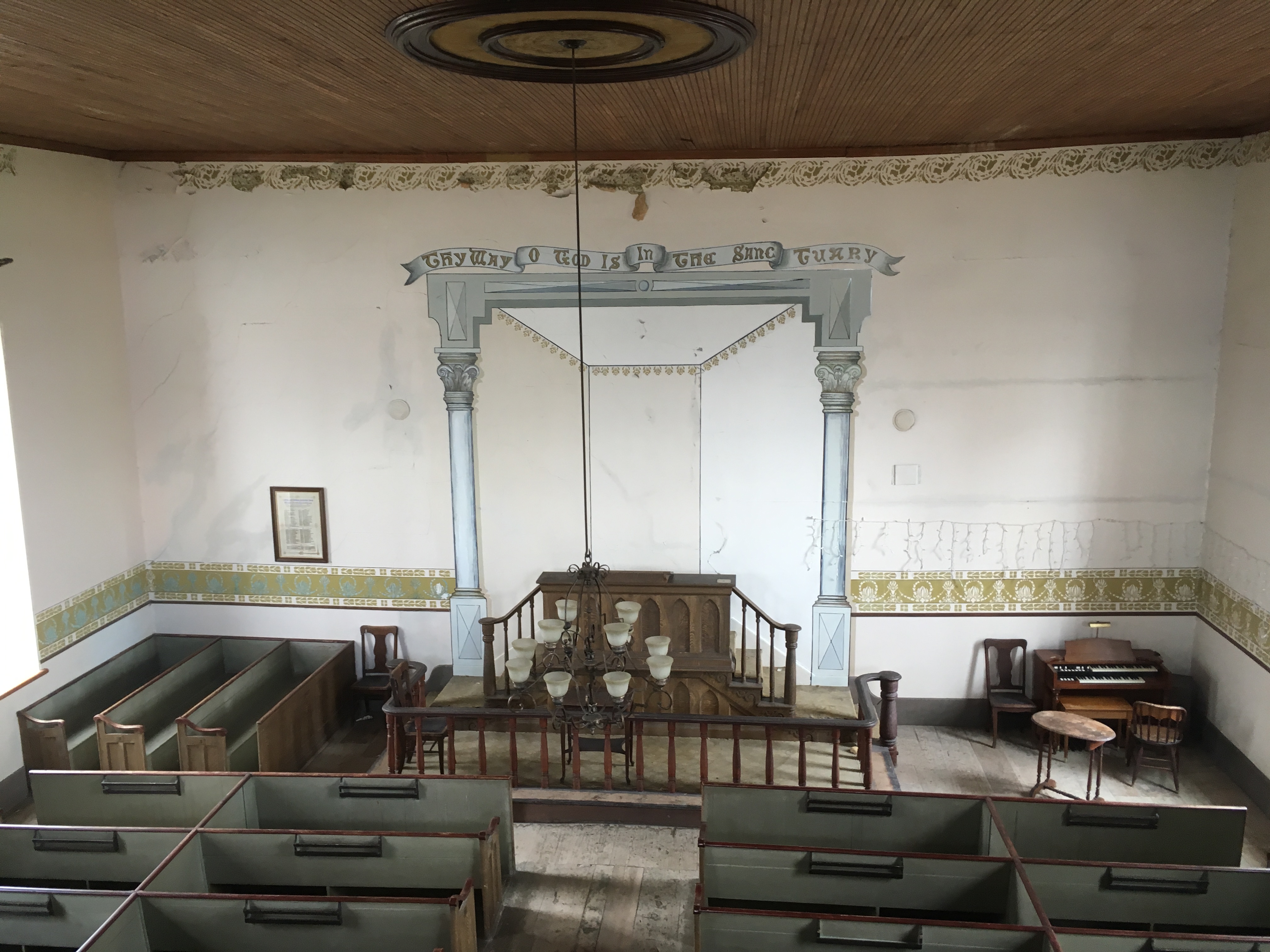 Odelltown is important for another reason, too, and one more directly concerned with Methodist history.  In the early decades of the movement, there was a running struggle between two major groups. “Episcopal Methodists” got their leadership and support from the United States.  Popular for their down-to-earth ways and emotional preaching, they were nevertheless suspect for their “radical” ideas.  The “British Wesleyans” got their marching orders from England and were considered more if a bit staid and formal.  Canadians chafed at the lack of autonomy with the Wesleyans: all key decisions had to be made in London.  The two groups competed much more than they cooperated until the Episcopal Methodists won the right to set up a separate Canadian General Conference in 1828, and a rickety union was formed between them.

Enter a new phenomenon, from down in the States: the camp meeting.  From the time of the first Canadian camp meeting at Old Hay Bay Church (Ontario) in 1805, these became hugely popular in Canada just as they were south of the border, and they spread rapidly.  Not only were the British Wesleyans alarmed at the spiritual agitations fomented by “half-starved Yankee enthusiasts,” they actually forbade their preachers from participating, and in some cases expelled from those who joined in anyway.

Still, tides are hard to turn back, and works of the Holy Spirit can be tough to quench.  In 1835, the first Wesleyan-sponsored camp meeting in Lower Canada was held at Odelltown.  Interestingly, it was not held in the Odelltown Church, but nearby in a maple grove that was cleared for the occasion.  Tents, fire stands, an altar rail and a raised, covered platform that could fit 12 preachers were among the temporary structures put in place. The site, divided into separate sections for men and women, had a marked perimeter and was patrolled by a volunteer Methodist security force along with local police.

Much later, the Methodist Church was one of three Canadian denominations that merged to form the United Church of Canada in 1925.  Odelltown Church is a registered historic site of the United Church, as well as of the Province of Quebec, and of Canada as a whole.  Though the stone chapel has long since ceased to hold weekly worship, it was refurbished in 1975 and is still officially considered a church building.  It holds an annual service and picnic, open to guests, on the last Sunday in June each year. The nearby Jackson Cemetery contains burials of the Odells and other early residents as well as headstones with symbology unusual enough to have attracted visitors from far away to try to decipher it.

Odelltown Church is located at 243, Route 221 Sud, Lacolle, QC J0J 1J0.  Admission to the grounds is free. Visitors wanting to see inside the building should make arrangements through the Lacolle United Church, 1 Rue de l’Église N, Lacolle, QC, J0J 1J0 Canada.  For information, call (450) 246-3549. Donations are welcome.  Lodging is available at Plattsburgh, New York; or in Canada at Saint-Bernard-de-Lacolle or (a bit farther, but worth the view) in Venise-en-Québec at the north end of Lake Champlain.