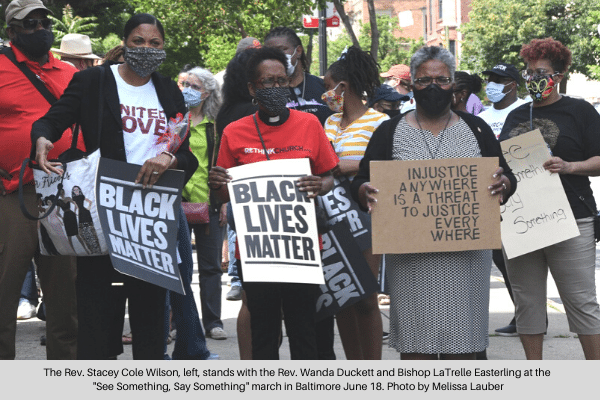 One message: The church must rise against racism.

Bishop LaTrelle Easterling, episcopal leader of the Baltimore-Washington Conference, put prayers into action at two events June 18 and 19, one in Baltimore and one in Washington, D.C. Both began at historic United Methodist churches and ended with hundreds gathered to hear speeches, prayers, and powerful music.

Go to the BWC’s Facebook page to watch recorded live streams of the two events. www.Facebook.com/bwcumc .

At the Washington march, held on Juneteenth, Bishop Easterling was accompanied by Bishop Mariann Budde, episcopal leader of the Washington Diocese of the Episcopal Church. They led a crowd of about 200 people in a march from Asbury UMC – a church that began in 1836 when a group led by Eli Nugent left what was then Foundry Methodist Episcopal Church – to St. John’s Episcopal Church, across the street from Lafayette Square and the White House.

Speaking in front of St. John’s, Bishop Easterling challenged United Methodists to act against the sin of racism. The question, she said, is “What will we do?”

“Baltimore-Washington Conference: I implore you; I implore you,” the bishop said, her voice rising, “as you go back to your places of worship, back to your campuses, back to your churches, back to the places where we gather, to be bold and prophetic witnesses of the Gospel of Jesus the Christ. To have the difficult conversations about race and White supremacy and oppression.”

And those conversations will be difficult, the bishop said, because some people will push back; some will even call it “ungodly” behavior. But talking about racism is not ungodly, she said, it is our duty.

“And so I ask of you,” Bishop Easterling said, “once a month, to preach a sermon, out of Christian Scripture …, and preach a word in the way that God intended it to be preached, and call us all into an introspective analysis of who we really are.”

“Ask ourselves, ‘Why are we so in a rush to be back in our buildings?’” she said. “I think it’s because we have allowed ourselves to be lulled in to being satisfied with the accouterments of worship – we like the hour-long coffee hour, we like to hear the singing, we like the gossip that takes place in the parking lot after the service – but the Communion that we’re in such a rush to take, we take it that we might come out into the streets and do this kind of work.” 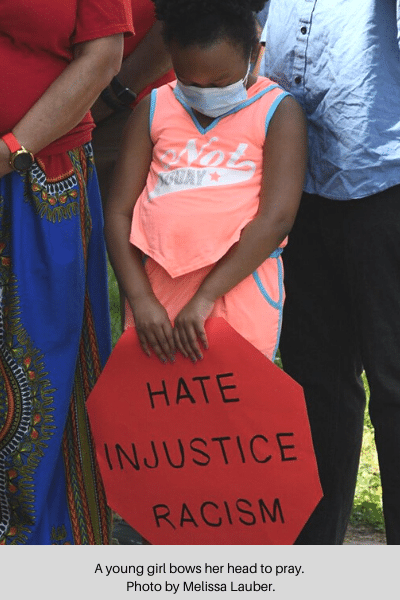 The bishop also spoke about finding hope in these tumultuous times, saying that she finds it especially in the young people of today. She also sees hope in her many “White brothers and sisters” who she has seen at vigils, marches, and rallies, especially the young people.

“They get it,” Bishop Easterling said. “They get that the promises of God are not some eschatological hope that we’re supposed to have in some by-and-by. They get it that it’s today. My hope stands in our commitment to demanding that there be economic justice.”

The bishop said that things get “real” as soon as you start talking about money. She said that the economic injustices prevalent in the United States, including redlining and gerrymandering, is what Martin Luther King Jr. was speaking out against, and that is what got him killed.

“They didn’t kill King because he was trying to get us equality at lunch-counters. He was killed because he had the audacity to say that that dollar needs to be as much in the Black community as it is in the White community,” she said. “Will we be committed to dismantling economic injustice?”

Bishop Easterling asked churches in the BWC who have economic wealth to behave like Acts 2 congregations and partner with churches that are economically struggling. “Share the wealth,” she said.

In Baltimore June 18, the bishop and clergy from throughout the Baltimore area gathered on the front steps of Lovely Lane UMC, the historic birthplace of Methodism in America, and marched a few blocks to St. Matthew’s New Life UMC. More than 100 people walked through changing neighborhoods to get a glimpse at what systemic racism looks like.

In remarks at St. Matthew’s, Bishop Easterling addressed the issue of people of faith becoming political. Some people say, the bishop noted, that the church should not be involved in politics.

“Is it political to engage in conversation with those, to challenge those who ensure that there are liquor stores all over our community, check-cashing businesses all over our community, but nowhere is there fresh fruit and vegetables being sold,” she said. “Is it political to be in conversation with those who set the budgets for our school system? If that is political, then I tell you that Jesus Christ was political.”

That is why they crucified him, the bishop said, because he “dared” to hold the government accountable and to say that they, too, would be held in God’s judgment.

The bishop said that it is beyond time for people to act, especially people of faith. But what does that mean?

“It is time to speak plainly about the racism of our past and our present,” she said. “To have difficult conversations about the personal biases, racist believes, and judgmental opinions that people in our churches – that we – hold. It’s time to stop spouting trite sayings. ‘I surrender all,’ and yet walk around with the arrogance that you belong to a race that is superior to another race. We cannot have surrendered all if we really don’t believe that all people are created equal.”

The bishop added that it’s time to examine and name the evils of the architecture of White supremacy, privilege, and oppression in the United States.

The Rev. Dell Hinton, one of the organizers of the Baltimore event, serves as pastor at Gwen Oak and Arlington-Lewin UMC’s in Baltimore. She said that the “See Something, Say Something” rally was designed as an opportunity for people to learn to hear and see differently.

“Everybody is talking about what needs to happen,” Hinton said. “But I thought we needed to stop, look, and listen, and analyze what really needs to happen instead of assuming what Baltimore City needs.”

Hinton said that she wanted people to see that even within a four-block radius, the world can change dramatically. The reasons are many, she said, but one key component is that in one area, near Lovely Lane, the homes are all owned by the residents. The other area, near St. Matthew’s, has homes that are rented, vacant lots left unkempt, and trash strewn about because the owners are absentee landlords.

“I hope this is the beginning of changes,” she said, “that this is not just a conversation but an action that we need to do. And I think the most important thing that we need to remember is that ‘love’ is not a noun, it’s a verb. We need to be about doing some things. I’ve been doing this for over 40 years, and I’m tired about talking about race; I want to do something about it.”