Watch a video about the new homes 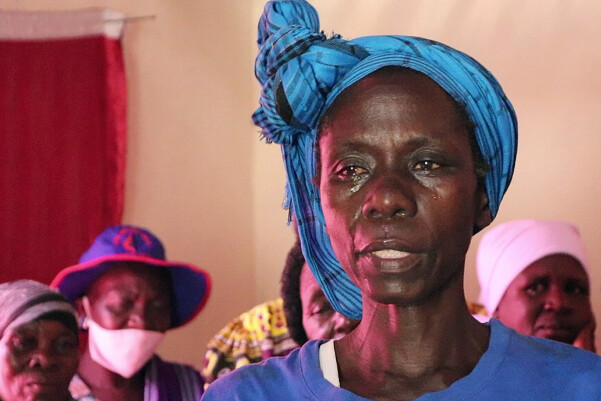 Vivian Chigweshe sheds tears as she expresses appreciation for her new home in Bikita, Zimbabwe,
sponsored by the Baltimore-Washington Conference of The United Methodist Church.
Photo by Priscilla Muzerengwa, UM News.

Nearly two years ago, Tropical Cyclone Idai, one of the worst cyclones on record to affect Africa and the Southern Hemisphere, left catastrophic damage and a humanitarian crisis in Zimbabwe, Mozambique, and Malawi. More than 1,300 people died, millions were affected and many families were left homeless.

Thanks to aid from The United Methodist Church, four families in the Bikita and Chirorwe communities of Zimbabwe’s Masvingo Province recently moved into new houses built through a rehabilitation program sponsored by the Baltimore-Washington Conference.

The Rev. Jairos Mafondokoto, Masvingo District superintendent, described the program as evangelism at its best.

“The community here in Bikita now sees Jesus in these houses,” said Mafondokoto. “The people of Bikita feel the hand and warmth of Jesus because they are under a roof, especially when it is summer in Zimbabwe.”

According to the Rev. Jacob Mushukuto, pastor of Bikita United Methodist Church, three new members “joined after seeing the goodness of the hand of the Lord in the community.”

A $50,000 grant from the Baltimore-Washington Conference went toward the construction of houses and toilets and provisions of food. The funds were originally earmarked for a pastors’ school.

When Cyclone Idai struck, the Zimbabwe Episcopal Area was preparing to hold its annual pastors’ school in partnership with Baltimore-Washington. Every year, said the Rev. Alan Gurupira, administrative assistant to Bishop Eben K. Nhiwatiwa, Baltimore-Washington paid for hosting the school at Africa University and participated “in selected areas in the field of training and empowering pastors.” With the help of Africa University’s late vice chancellor Munashe Furusa, the pastors’ school was still held at the university in 2019.

The decision to redirect funds toward cyclone relief was well received by recipients in Zimbabwe and Mozambique. Among the first purchases were two motorbikes so that pastors in the affected area of Chimanimani Chipinge District could travel to counsel survivors. Food supplies were bought for distribution by the resident bishop.

A key need was permanent shelter for affected families. In Bikita, four families were identified, and the first four houses were built. Volunteers from the community helped with construction. During a service at each house, a representative from the bishop’s office offered prayer and presented keys to the new homeowners.

“I am just very thankful and blessed,” said recipient Vivian Chigweshe. “A lot of great people got together and made this happen.” 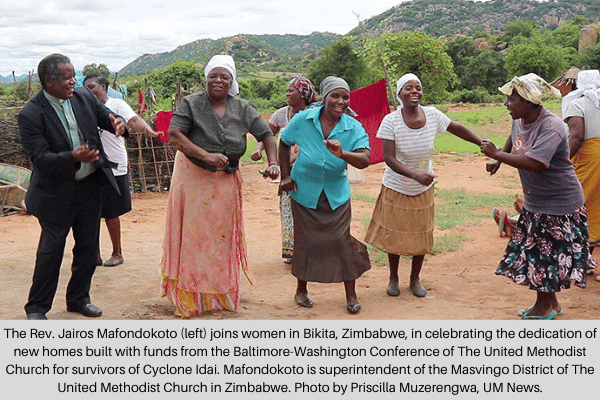 Community development consultant Morgan Jeranyama described the project as gratifying and life-changing. “Community members came to assist mobilizing, and local available resources delivered the bricks and even provided assistance to the builders,” he said.

Jeranyama thanked the community for their cooperation, hard work and dedication, and for providing temporary shelter to neighbors who lost their homes.

“Bishop LaTrelle Easterling and members of the Baltimore-Washington Conference feel blessed to learn that the $50,000 Cyclone Idai Relief Grant that it provided has successfully resulted in the provision of permanent housing for numerous families in the Masvingo District,” said Charlie Moore, a leader in the conference’s partnership with Zimbabwe.

“Our ability to respond to this natural disaster is full testimony to the strength of our United Methodist connection and the power of the Holy Spirit.”

He noted that the 20-plus-year partnership between Baltimore-Washington and the Zimbabwe Episcopal Area is stronger than ever before.

Joyce Shingai Chapungu, communications officer with the Environmental Management Agency in Zimbabwe, said some of the area’s recent severe weather events such as heat waves, floods and cyclones could be attributed to climate change.

“The impacts of climate change,” she said, “have been felt in the region, continent and world at large. Zimbabwe has not been spared, mainly because of its low adaptive capacity as a result of poor social and economic development.”

The Rev. Pauline Nyamudzura, Marange District superintendent, recalled: “the tropical depression, with heavy rains and bursts of strong winds in Manicaland Province, with some roofs of houses blown off.”

Yet, Dhlakama, paralyzed by a stroke 30 years ago, persists in her faith. “Angels of God have descended to my life,” she said.

“The building of houses program that started in the West Conference,” Gurupira said, “shall be extended to the East Conference, subject to availability of funds.”

Kumuterera and Muzerengwa are communicators for the Zimbabwe West and Zimbabwe East conferences, respectively.