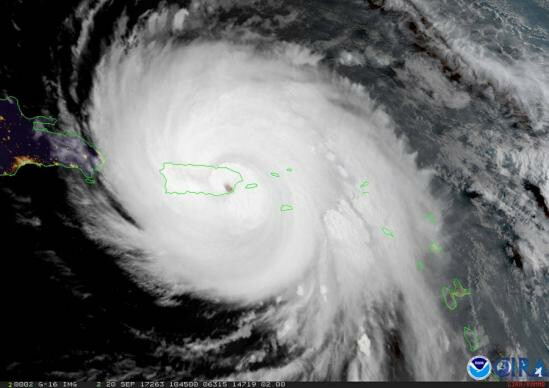 United Methodists were praying and standing in solidarity with Puerto Ricans while awaiting word about the effects of Hurricane Maria.

The Category 4 hurricane left Puerto Rico without power, with major building and infrastructure damage and a staggering amount of rain — about 30 inches in some areas.

The Baltimore-Washington Conference has a covenant relationship with the Methodist Church in Puerto Rico. The conference will be accepting monetary donations to help stricken residents of Puerto Rico.

“Bishop Héctor (Ortiz Vidal) is our board member and we have a number of Global Ministries missionaries and their families serving in Puerto Rico. We pray for their safety and stand in solidarity as one Methodist family.”

In a Sept. 21 message to United Methodist Communications, Ortiz said the destruction was “immense” and communications difficult.

Churches and individuals also can assemble cleaning buckets. Here is how.

“We do not know yet the damage that our churches suffered,” the bishop wrote. “I live in a sector that is isolated and blocked right now. I am working together with my neighbors in removing debris from the blocked roads and I trust some time it will be open.

“But we are alive and we are standing in the fight. With the strength of God's hope, we will rebuild Puerto Rico again.”

Reached on Sept. 20 through a Facebook message, Paloma Rodriguez Rivera, a youth leader in the Methodist Church of Puerto Rico, said she believed there were many homes that had been flooded or “completely destroyed” by the hurricane-force winds but didn’t know what areas had been affected most by Maria.

“It is a miracle that I have internet because most people don’t,” wrote the San Juan resident. “I see that a lot of people don’t know anything about their family and they are desperate in the diaspora.”

This is the second of a tropical storm one-two punch for Puerto Rico. Hurricane Irma brushed by Puerto Rico on Sept. 6, leaving more than a million people without power but not the widespread damage that has resulted from Hurricane Maria.

The United Methodist Committee on Relief “is praying along with others” for the safety of people in Puerto Rico, said Catherine Earl, the agency’s director of U.S. disaster response and partner relations.

“We know that there are many people here on the mainland that have family and friends and other missional connections to Puerto Rico and the people of Puerto Rico,” she added.

Through the church and other partners — including National Voluntary Organizations Active in Disaster — and governmental connections such as FEMA, UMCOR can be part of a coordinated response in Puerto Rico when relief work begins, Earl said.

Kemper said UMCOR staff already had reached out to the Methodist Church in Puerto Rico regarding response and recovery.

In a letter written to Kemper as Irma was headed to the island, the Puerto Rican bishop asked The United Methodist Church for prayers and solidarity.

At that point, the Puerto Rican church had been in contact with 100 churches, including those on Vieques, Culebra and St. Croix of the U.S. Virgin Islands.

“We have oriented them in following the necessary steps to prepare for this atmospheric event,” he continued. “We have put in place an emergency system to work in the aftermath of the event. Nevertheless, there is not enough preparation for this type of hurricane.

“We are requesting the United Methodist Church for your prayers and your solidarity during this difficult time,” the bishop wrote. “Knowing that people outside of our area are praying for us gives us faith and courage.”

Bloom is the assistant news editor for United Methodist News Service and is based in New York. Maldonado is associate director of Hispanic/Latino United Methodist Communications. Follow Bloom at https://twitter.com/umcscribe or contact her at 615-742-5470 or . To read more United Methodist news, subscribe to the free Daily or Weekly Digests.