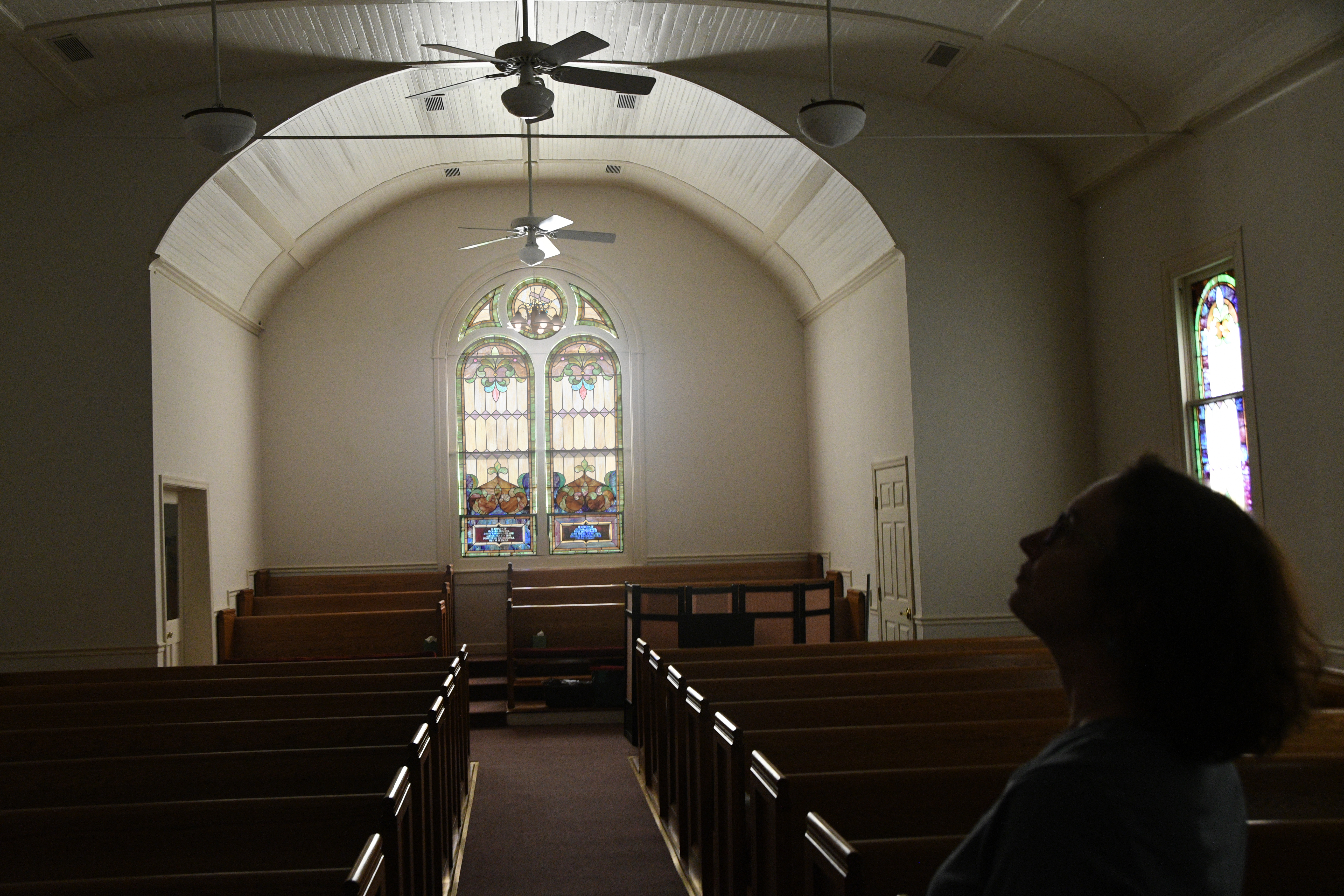 In the past, the closing of a church would have been cause for sadness and regret. But in Solomons, Md., a small group of people have adopted the concept of legacy to create a new experiment in faith-filled service.

On July 1, the 150-year-old Solomons United Methodist Church closed. Period. Full-stop. The locks were changed. Care of the building was transferred to the Baltimore-Washington Conference; the pews will be given away and the Rev. Dottie Yunger pronounced the final benediction over the worshippers.

But a new entity is rising in its place – Solomons Mission Center, a 501.c.3 non-profit that provides food and clothing to the waterfront community. With a grant from the Baltimore-Washington Conference, this new initiative will serve and experiment for four years and give birth to a new, yet to be discovered, kind of faith community.

“They’re essentially re-engineering the creation of a church,” said the Rev. Bill Brown, the BWC’s Director of Innovative Evangelism. Traditionally, a church begins with a small group of people gathering to pray and worship. They grow and eventually begin to do mission and ministry together. At Solomons, a handful of volunteers have begun an outreach to serve the community. From that effort, a worshipping community may eventually come forth.

But Solomons Mission Center is not beginning with any end in mind. Over the past few years, they have learned that the Holy Spirit moves in unexpected ways, and they are seeking to remain open to the spirit of generosity, flexibility, and discovery.

The Mission Center had its start when Roberta Bordash and her daughter, Cassidy, began buying a cart or two of groceries each week to hand out to people who called upon the church when they were hungry. Bordash worked as the church administrator.

The church had been involved in Calvert County’s Heartfelt Ministry to provide backpacks full of food for children of low-income families who needed meals over the weekend when schools weren’t in session. They also partnered in a Tasty Blessing Ministry, serving community dinners with St. John’s and Eastern UMCs. The small congregation, with about 30 worshipping on Sunday mornings, had a heart for mission.

News of the food pantry spread. Yunger’s husband, Phillip, was in a local establishment and a man approached him saying he had just received his COVID-19 stimulus check and didn’t need the funds to get by. So, he gave half to his mother and bought $700 worth of groceries in the back of his truck for the food pantry.

That kind of experience was repeated in a variety of ways, and it was not uncommon for Yunger to find piles of bags of unperishable food on her porch or sitting in the back seat of her car when she came out of work.

Eleanor Keeley is one of the leaders of Solomons Mission Center. Eleanor said, “I have always been passionate about helping people throughout my life.  After retiring I was looking for a new path to follow,” she said. “Having suffered from food insecurity in different stages of my life Solomons Mission Center seemed like the perfect place for me.”

She has found a sense of satisfaction in the ministry. “Knowing how grateful our guests are for food and friendship brings me great joy,” she said. “The feeling of knowing you are helping when they come in and ask me to pray with them or just sit and listen makes all the long hours and hard work worth it.”

For the past few years, as the food pantry grew, the number of people attending worship shrunk. The congregation kept asking themselves what they were doing wrong, Yunger said.  They tried all the traditional fixes to try to get more people in the doors, even as they ended up spending down their endowment funds to try to make ends meet.

While salary assistance from the federal government, in the form of a PPP grant, allowed them to pay salaries, the church had no lay leader, no liturgist and no choir. The pandemic held up a mirror that helped them more clearly see the reality they faced.

Yunger contacted the Washington East District Superintendent, the Rev. Johnsie Cogman. Together with Brown and congregational leaders, they figured out the church’s strengths – their feeding ministries – and decided to focus on them.

“We decided if that means shutting down the rest of the church to save those things, that’s what we’ll do,” Yunger said. “We doubled down on the places where we were making disciples of Jesus Christ and transforming the world and cut loose of everything else that took away our time, money, and energy. That included worship.”

With actions that felt like they were building the plane as they were flying it, Solomons’ leaders applied for and received an $80,000 grant from the BWC’s Unified Funding Task Force to cover overhead expenses, and Yunger was appointed to serve beyond the local church at the Solomons Mission Center.

“Solomon's Mission Center is innovative because its primary focus on is the process, not the property, Cogman said.  “There comes a time when we must face the reality that it's time to close one thing, stand on our faith and trust God to use us to open another thing, which will continue to bring God glory and serve God's people.  We had to leave Solomons UMC to travel to a new entity called Solomon's Mission Center.  We did not know 100 percent what the future might hold, but every day we are in awe of God's development of Solomons Mission Center.”

“This is just the beginning of building more relationships and making more disciples,” Cogman concluded.

The building that housed the church, and now houses the mission center, sits directly on Back Creek, which leads to the Patuxent River and the Chesapeake Bay. One of its pastors used to ride his boat right up to the church’s back door.

The history and heritage of living on the water runs deep in the community, explains Yunger, who herself is a marine biologist, and supplements her part-time salary working at the Calvert Marine Museum.

Solomons UMC was made possible by Isaac Solomon, who came from Baltimore to found a harvesting company and oyster packing plant. Solomon, who was Jewish, saw that his employees would gather after work to pray and read the Bible together. He gave them the land, three doors down from the factory, that the church was built on.

Recollecting this story, Yunger realizes that “we’re not really doing a new thing,” we’re going back to what made us a church to begin with” – seeing people’s needs and gathering together to meet those needs. We’re returning to our Wesleyan roots, she said.  Methodism’s founder, John Wesley, met and mentored laborers in the coal mines and fields. “It was never about being in a building,” Yunger said. “We’re just being more Methodist.”

As the mission center expands, Yunger envisions the congregation reaching out to meet the community on the water. On recent Sundays, she said, from the church’s door, you could see more people kayaking, canoeing, and paddleboarding than were in the sanctuary.

She envisions something that revolves around an EarthKeepers’ model or a church of the wild, which brings worship outside and draws from the Bible and the “book of nature.” For now, she and other leaders are remaining open to the movement of the Spirit.

“We started out as a small food pantry with very little resources as the years passed, we have become a big part of the community,” said Keeley.  “It is a belief at our Mission Center that every person that walks in our building should be treated with respect so they can maintain their dignity during these difficult times.”

Part of nurturing this dignity was caring for people and making efforts to provide fresh and healthy food. Those involved at Solomons are convinced that it was the Holy Spirit, who seems to have traveled with them throughout this venture, brought a garden to the site and fresh vegetables to those they serve.

During the pandemic, Yunger explained that they received a call from the Sierra Club Chapter of Southern Maryland, who gave them a grant to build a community garden on the property.  On the day they broke ground and planted the garden, Yunger was worried that enough people might not show up.

By the end of the day, more than 40 people were present, twice the number that had gathered that week in the sanctuary for worship.

“But that garden was worship,” Yunger said.  She felt called to celebrate Communion. “In the middle of the garden, we broke bread, just as we broke ground. And the Bread of Life continues to go out into the community.”

Solomons Mission Center is located at 14454 Solomons Island Road South. To donate or learn more about this ministry, call 410-326-3278.