It was three weeks ago this morning when I settled into my favorite chair with a cup of hot coffee on the table next to me and opened the pages of the Washington Post. It’s my favorite routine for a Saturday morning, one that normally encourages the calmness we seek for our only day off together. But Saturday, February 20 was different because rather than reading about another homicide in our city on the front page of the Metro section, I was actually reading about someone who was once part of my community.

I know Clifton as someone who came to our church’s shower ministry a few years ago and then to our Tuesday morning Hope 4 All group. Our church paid for a bus ticket so he could go home and be with his mother in Atlanta. Along with another church member, I took him to lunch on his birthday. I served communion to him on Christmas Eve. And I not only knew Clifton, but I also knew one of Clifton’s roommates – the person who was not home on that day. He, too, had been a Shower Ministry guest and then a Hope 4 All guest. He came to the church to see me in mid-December immediately after signing his lease to the same house where Clifton lived. He wanted to not only show me his keys but actually show me the place where he had signed that he had access to a room of his own. It was a celebratory moment filled with being born anew. And so when I first read about Clifton’s death, my mind also immediately went to this third roommate who we prayed was still alive. We located him a couple hours later, and he’s now staying in the home of a colleague of mine until he can find another place to live.

But I’d never known anyone who was murdered. I’ve never read about a homicide that includes the name of someone whose story I know well. How could this be?

The waves of pain and anger came crushing in again on Monday night when I got a message saying, “Ivy died.” Ivy? How could Ivy died? Ivy is one of the reasons we started our Tuesday morning group. I first met her on a cold January day in 2015 when I went outside with a colleague to make sure everyone was okay. The temperatures were cold enough to kill someone. But we had no idea what we would find that day. When we back the layers of green tarp and blankets, we found a cozy communal space holding a few prescription drugs, some food, and lots of clothing all covered with more blankets. It was Ivy’s space, Ivy’s belongings, Ivy’s temporary home. And it was this image that captured our congregation’s attention enough to figure out how we could offer hospitality in a different way.

Since our change in policy, a group of individuals gathered every single Tuesday morning with the exception of one. There are some mornings when there are 15 people at the table and other mornings when there are three or four people. Each gathering starts the same, with an invitation to tell us who you are and what you have done in the last week to get closer to housing and/or employment. Every person’s answers are recorded so we can hold people accountable the following week. If someone has a barrier whether it be transportation or clothing, then we try to remove it. We’ve loaded dozens of Metro cards, purchased new shoes for an interview, solicited new suits for men to wear to a meeting, paid for licenses and school fees, and countless other things. All of these expenses are met through a fund that was established in 2007 when our congregation let go of inviting people to give Easter lilies in honor or memory of someone on Easter and instead give life through the purchase of a share in the Harry McLean Life Fund. A list of all who give is included in the Easter bulletin, along with the names being honored or remembered. It’s just that while lilies often die a few weeks later, these gifts have produced new life in the form of food, gift cards for medication, and help with housing and job expenses. We have learned that someone moved from homelessness into housing is nothing short of a miracle. And still, we’ve had front row seats to some 14 different people who have been able to make this incredibly large step in the last year.

Two of them are now dead.

First Clifton and now Ivy. While it would not have surprised me to learn that Ivy had died several months ago – her body was so frail – Ivy was doing incredibly well. She’d put on at least 20 pounds, looked healthy, and had returned to our group a few weeks ago to start offering encouragement to others. She had a housing voucher. She was housed – but she came to tell others they could do it. Just two weeks ago she sat next to me. I can still hear her saying, “You came!” to another participant. “I’m so glad! You can do this.” When it came time for her to share, she joyfully talked about her relationship with her son, describing how big he is and how much she’s enjoying him. She shared how her longtime partner was finally in treatment and that they were committed to married one day. She was overflowing with goodness and health and wisdom and triumph.

So, how could Ivy be dead? That was the question that kept going through my mind last Monday night only to later see this article being shared by another person from our church. Ivy had been shot in broad daylight. The one who was rebuilding her life one painful step at a time had everything robbed from her in the blink of a bullet.

I’ve never felt this kind of pain when it comes to knowing someone has died. The tears of grief started to overflow on Wednesday morning after I successfully kept them tucked inside on Tuesday. How could someone who finally had so much going for them be killed on a Sunday afternoon? Good God Almighty, can you help us? Can you hear us? Can you prevent this from happening again?

I soon started to ask how we begin to move forward. How long will we wait before reading about someone else we have grown to love? Who else from our community will have their life robbed from them in an instant? Where are you ? 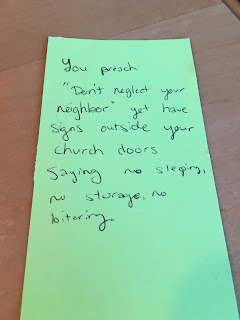 My mind then turned to an anonymous note left for me at our Ash Wednesday worship service. The individual was taken back by signs that say, “No Sleeping. No Storage. No Loitering.” They were bright orange and quite loud. Our practice was to always take them down before worship begins but we forgot to take them down for a midweek service. The signs have since been redesigned with information on how we are trying to be in with people who need places to sleep and store their belongings. There are invitations to come inside for a shower or join us on a Tuesday morning. The person who wrote this note helped us see the impact of our signage. But I’d love to have a conversation with him or her.

I’d love to have a dialogue about how our understandings of mercy and justice have been transformed. Opening a church’s porches for people to come and sleep outside is not hospitality. There is nothing merciful about thinking your church is doing someone a favor by letting them sleep outside. Have you ever invited someone to come and visit you and then given them a pad on your porch?

We are so quick to judge one another.

Our church and I were judged harshly on Ash Wednesday.

But I’ve also been so quick to judge people.

My heart may always be shattered a bit – not like the bus stop where Ivy was killed – but by the weekly reminders of how broken our community is and how much healing can occur when people who have so much start to share a little, when individuals can muster the capacity to give a second chance even when they see the words “convicted felon,” and when we wrestle together to figure out what would Jesus really do.

Our nation is also deeply broken by our addiction to guns. Lives and families and communities are being shattered. The madness needs to stop. Changes in policy are needed.

Will you pray for us, please?

changed my life. I pray her memory is one of the last things I forget and that it also propels me to encourage our congregation to do everything we can to journey with people and prevent further lives from being robbed.