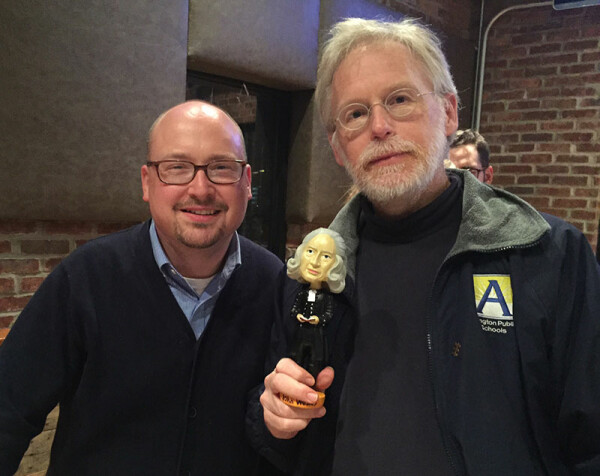 A group of students from Wesley Theological Seminary gathered in a gastropub in Tenleytown Monday night, Oct. 24, to play United Methodist trivia.

Quick Question #1: This fire, in 1709, almost killed John Wesley. Where was the fire? (Answers at the end of the article.)

The brainchild of Professor Ryan Danker, Assistant Professor of the History of Christianity and Methodist Studies at Wesley, “Methodist Pub Trivia” was the first of its kind for the school.

“We wanted to get Methodist students together from the seminary in a casual setting,” said Danker, noting that many different denominations are represented at Wesley. “It’s a Methodist seminary, but sometimes we forget that we need to get together and be distinct.”

Danker said he wanted to find a way to connect both fellowship and United Methodist history. The trivia night was born.

Quick Question #2: Where does the name ‘Cokesbury’ come from?

Thus, while patrons were downstairs watching the Texans and the Broncos play football, upstairs, a group of self-professed “Metho-nerds” competed for the grand prize: A John Wesley bobble-head.

“We wanted to do something off-campus,” Danker said. “It’s one thing to be in the classroom setting, it’s another thing to be at the pub and relax a bit and enjoy each other’s company.”

The 20 students formed five separate teams, each team with their own self-chosen name. “The Almost Christians” were one team, the “Old Geoffrey” was another.

Danker said he was very pleased with the results of the and is already planning to do it again.

A student, working with Danker, came up with the topics of the trivia contest which included little-known facts about Wesley seminary.

Danker said he made some of the questions hard, and some easy. Among the most difficult: identifying the typical Bolt Burger order for seminary Dean, Robert Martin (A: “A Good Earth burger with everything and sweet potato fries.”)

Danker is currently teaching a class on United Methodist history, and he offered his students extra credit if they came. One of them was Rebecca Goltry, a third-year M.Div. from Wichita, Kansas.

“Several of the trivia questions we were able to answer because of taking his class,” Goltry said. “His class is helpful in preparing for ordination as I look forward to meeting with my Board of Ordained Ministry in a month.”

Alexandra Woody, also a third-year M.Div. from southern assisted Danker in creating the categories and questions.

“I am a Methodist nerd, you might say,” she said. “Dr. Danker and I have been trying to get more United Methodists involved on campus. We thought a great first event for Methodists on campus would be a trivia night.

Quick Question #4: When was the United Methodist Publishing House founded?

The location of trivia night was within walking distance of the seminary, Woody said, and the bar owner let them have the upstairs at no cost. She said that a lot of students are contacting her already, asking about when they will do it again.

“We were trying to encompass all of Methodism and, since we’re at Wesley Seminary, we added some question about that,” she said.

“When we look at our history,” he said, “we realize that we’re a movement within a much larger tradition. We are a tradition, but we have the depth of English Christianity – both its Catholic and Protestant wings – as a part of who we are. I think that makes us a richer tradition.”

Quick Question #5: These five actions are required of United Methodists in the membership vows. Name them.

For more information on conducting your own Methodist Pub Trivia, contact Danker at .

QQ #1 – The fire occurred at the Epworth Rectory.

QQ #2 – “Cokesbury” is a combination of the last names of the first two bishops in the United States, Thomas Coke Francis Asbury.

QQ #3 – There are three people buried on the campus of Wesley Seminary: Bishop Bromley Oxnam, Clarence Goen, and Jim Logan.