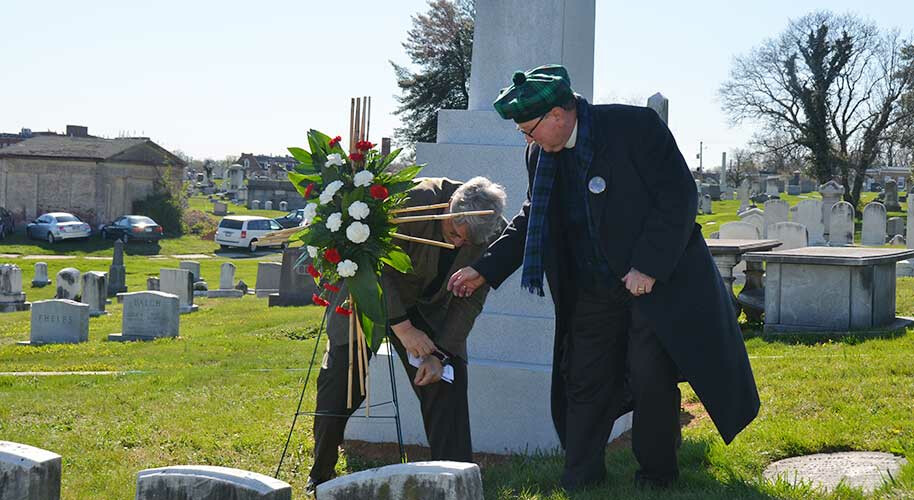 Bishop Francis Asbury was remembered as the “The Prophet of the Long Road” on the 200th anniversary of his death during worship at Lovely Lane UMC and ceremonies at Mt. Olivet Cemetery, both in Baltimore, on April 3.

Asbury, an icon of Methodism from its start in Colonial America, arrived on these shores from England in 1771 at the age of 26. He had answered a call as a lay preacher from John Wesley to go to America. At the time, there were about 600 Methodists in the colonies.

These facts are well known, said the Rev. Alfred Day, General Secretary of the General Commission on Archives and History, who preached at Lovely Lane to start the commemoration. However, Asbury’s message for today, he said, is just as important and often missed.

“He stayed,” Day said of Asbury. “When the war for independence was won; when British-born preachers packed up and headed home, British-born Francis Asbury stayed.”

Asbury’s endurance and persistence are not to be overlooked, Day said. “There was no mountain too high, no valley too low, no river too wide to keep him from spreading his version of the Methodist message.”

Asbury, Day said, was an effective leader but not a great preacher. A man who possessed keen organizational skills, Asbury’s genius was derived from his simple mission statement. Day noted that Asbury wrote in his journal during his trip to America that “I am going to live to God and invite others to do so.”

Day also noted similarities between Francis Asbury and another Francis, that of Assisi. Asbury never married and gave nearly all of his money and possessions away during his ministry, Day said. He the country on horseback, logging about 6,000 miles per year while staying in the homes of friends, strangers and converts alike.

“Asbury was a leader with great humility, perseverance, piety discipline,” Day said. “He also had — and I was surprised to learn this — he had a wonderful sense of humor.”

Asbury knew popular American culture long before anyone else because of his extensive travels, Day said. His mission was to make the Gospel relevant to everyone he met. One piece of American culture he abhorred was slavery; Asbury called it a “moral evil.”

And yet, Asbury made accommodations for slave-holding Methodists, mostly in the South, in order to hold the church together, Day said. “This haunted him the rest of his life.”

At the Christmas Conference of 1784, held in Baltimore, Asbury a Deacon on one day, Elder the next, and consecrated bishop the next. He became the leader of the new Methodist Episcopal Church.

The Rev. Cynthia Moore-Koikoi, superintendent of the Baltimore Metropolitan District, brought greetings at the cemetery on behalf of Bishop Marcus Matthews. The bishop was in Korea, attending the Nambu Annual Conference with which the BWC is in partnership. The relationship between the two groups goes back 130 years, when the Rev. John Goucher, then pastor of Lovely Lane, had a vision of taking Christ to Korea.

“We are here,” Strawbridge said, “to stand bodily beside these people: Francis, and John (Emory), and Enoch (George) and Beverly (Waugh). Besides Robert, Elizabeth (Robert Strawbridge’s wife), and Jesse (Lee) and (E.) Stanley (Jones)… to be reminded that these are people like ourselves; no figures of legend, but simple persons of flesh and of breath who followed God.” 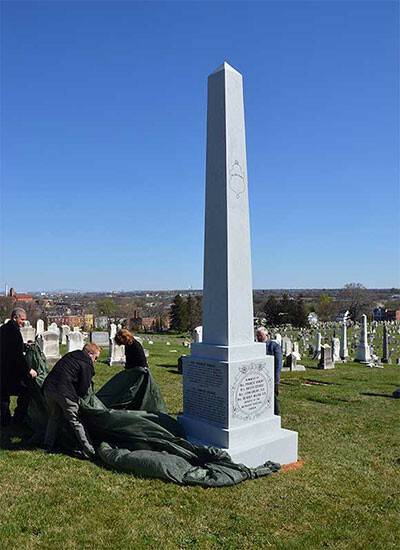 Strawbridge, Vice President of the United Methodist Historical Society of the BWC, said that the gathering at the cemetery was to dedicate a monument, a word that means “reminder,” he said, “which stands firmly on the ground, but drawing from an ancient symbol that points heavenward.”

Also in attendance at the cemetery was Jim Winkler, General Secretary of the National Council of Churches, who brought greetings from its 38 ecumenical partners.

The Rev. Emora Brannan, BWC Historian and president of the UMHS, spoke about the journey Asbury took, even in death.

After Asbury died in Virginia, his body was buried there. The 1816 General Conference ordered his remains moved to Baltimore, where it was reported that 20,000 people lined the funeral procession. He was re-interred at the Eutaw Street Church.

The 1852 General Conference authorized the transfer of Asbury’s remains to Mt. Olivet Cemetery, just southwest of Baltimore. It was at that spot that people gathered in the afternoon of April 3 to dedicate a new memorial to Asbury and the other bishops and pastors buried in what is now called “The Bishop’s Lot.”

“Even in death,” Brannan said, “Asbury was an itinerant preacher.”

A new exhibit, “The Brand and the Bishop,” was also opened April 3 at the Lovely Lane Museum.