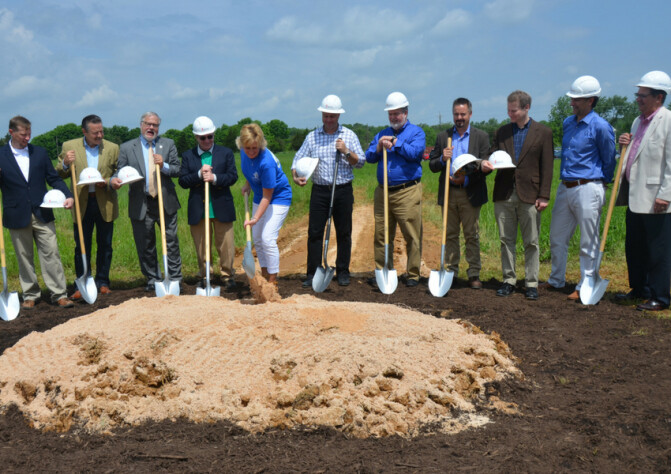 Susie Miller, center, Chair of the Church Council at Rehoboth UMC in Williamsport,
turns a shovel of dirt during groundbreaking ceremonies May 20. Photo by Erik Alsgaard

Naming a church “Rehoboth” might seem somewhat strange. It’s not a common word, and around here, it’s perhaps most often associated with a nice town and a great beach in Delaware.

But take a minute and read your Bible. Look in Genesis 26, and there you’ll see the story of Isaac camping in the valley of Gerar. You’ll need to remember that Isaac was a very wealthy man in those days — he had massive flocks and herds of animals, many servants, and abundant stores of crops. He also had a very beautiful wife, but that’s another story.

Water was a precious commodity, especially with all those people and animals. In those days, to get water, you dug a well. And not just one, but several. Isaac’s father, Abraham, had done that years before in the valley of Gerar. The problem was, his enemies had filled them in.

Isaac set about re-digging them, which worked just fine for a time. Eugene Peterson’s “The Message” picks up the story from there: “One day, as Isaac’s servants were digging in the valley, they came on a well of spring water. The shepherds of Gerar quarreled with Isaac’s shepherds, claiming, ‘This water is ours.’ So Isaac named the well Esek (Quarrel) because they quarreled over it. They dug another well and there was a difference over that one also, so he named it Sitnah (Accusation). He went on from there and dug yet another well. But there was no fighting over this one, so he named it Rehoboth (Wide-Open Spaces), saying, ‘Now God has given us plenty of space to spread out in the land.’” (Genesis 26:19-23)

The Rev. Mike Bennett used this biblical reminder during his May 20, as hundreds of members, visitors and dignitaries gathered for a special celebration at Rehoboth UMC in Williamsport.

Or, to be more precise, the future location of Rehoboth UMC. 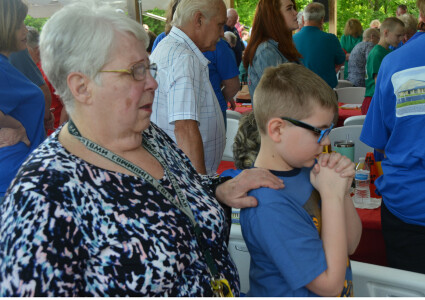 At a Pentecost groundbreaking ceremony that signified the start of a $4 million expansion, church leaders said that the new building and new location their faith in the future of The United Methodist Church in the area.

Bennett did some digging of his own prior to preaching and it had nothing to do with wells. In the church’s history, he found that Rehoboth’s birth had to do with a church split in the 1820’s over the power of bishops to appoint clergy. One group liked it; another did not. The Methodist Protestant Church (who did not like bishops) and the Methodist Episcopal Church (who did) was the result, created in 1828.

One such Methodist Protestant group met in Williamsport. They rented space at the local Presbyterian church because – and this is important – they had no space for themselves.

Linda Henesy prays the Lord's Prayer with her ,
Ethan Henesy, during worship May 20 at Rehoboth UMC. Photo
by Erik Alsgaard.

After several years, Bennett said, they finally bought a plot of land in what is now downtown Williamsport, Lot #69, next to the bank. They called the church Rehoboth, he said, because they had “room for us.”

About 200 years later, that phrase has now been changed by the church. It is now “Room for All.”

As hundreds of people gathered in the new pavilion on Lappans Road, about three miles southeast of the current church building, many were wearing brightly colored shirts that “Room for All” on the front.

Susie Miller, Church Council Chair for Rehoboth, was wearing a blue version of the shirt and couldn’t quit smiling.

“God has cast the vision, and now is the beginning of that vision,” Miller said. “It’s so exciting to see God at work.”

The actual project has been in place for about 20 years, Miller said. God, she said, is going to give the church many more opportunities for ministry and reaching the community.

One of the problems of being in the downtown area was that they had maxed out their parking, and every nook and cranny of the church was being used, according to Miller.

Tom Taylor, the chair of the Board of Trustees, said that the groundbreaking was a celebration of the biggest step they’ve taken so far on growing the church.

“We’ve had the dream of building out here for about 18 years,” he said, standing in the middle of the 106-acre parcel of property the church owns. A pavilion was built on the site several years ago, and the church uses it during warm weather for worship and other special events.

“We have dreams of adding on in different phases,” said Taylor. The first phase of construction will include a multi-purpose room/gymnasium/social hall and will include office and classroom space.  “And a parking lot,” Taylor said. “A big parking lot.”

The second phase will be the sanctuary and other accompanying facilities. Phase one of construction, Taylor said, is expected to take between nine and 12 months.

“It’s amazing to be here today,” Taylor said. “It’s been a long journey. I’ve been on the journey for about 15 years in various roles. We’ve really had a lot of teamwork, focusing on the fact that we have to get a lot of little things done together to get to this big goal.”

The Rev. Conrad Link, superintendent of the Cumberland-Hagerstown District, joined in the groundbreaking and the celebration. He brought greetings from Bishop LaTrelle Easterling during the worship service. 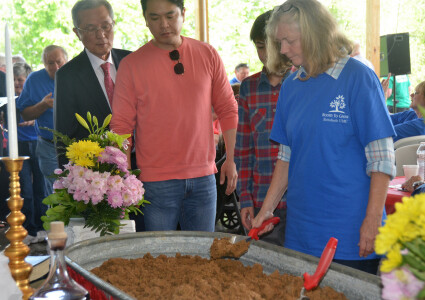 “This is what ministry is all about,” he said, “having churches grow, by people and by . This is a bright spot in the Western Region. They’ve been on a journey for a number of years and today is the culmination of that journey.”

Speaking about the journey, Bennet, who has served a Rehoboth for five years, said, “The truth is, that the moments added up, step by step, incrementally. At the heart of it, it's the congregation's faithful persistence that has been the affirmation to move forward. I know this may not be as compelling a story, but it’s what I know to be true. These remarkable leaders of Rehoboth UMC have been enthusiastic and faithful throughout the process. The real story is in the constant faith and abiding love of this congregation. If I were to liken it to a biblical narrative, I would look to the Israelites, strengthened in their own faith while preparing for a Promised Land that will be enjoyed with fruitfulness for generations to come.”

A time of Communion during worship had an unusual wrinkle. As people came forward to receive the elements, they were given the opportunity to pray over a large tub of dirt, taken from the building site, and to turn over a small spade-full.

“It’s a lot of work digging wells, just like it is a lot of work building a church building,” Bennett preached. “ generations after you’ve built that building, other people come and they enjoy it and they live in it.”