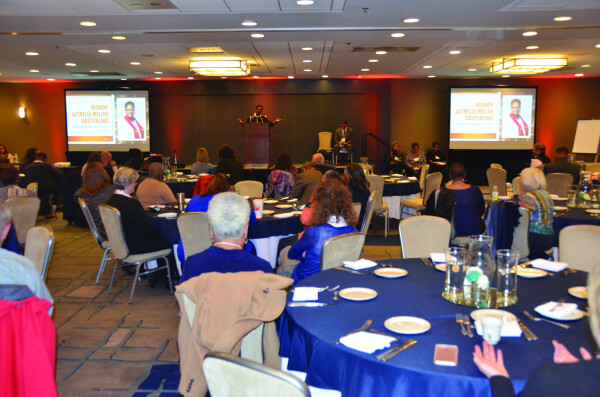 When fighting racism, sexism, xenophobia, misogyny and other “isms,” United Methodists are at a distinct advantage. Because we are connected in Jesus Christ and work together as a connectional church, coming together across theological and political lines is part and parcel of what we do.

That was part of the hope and challenge offered by Jim Wallis, president and founder of Sojourners, and Marvin McMickle, president of Colgate Rochester Crozer Divinity School, at the reCall Summit Oct. 26 and 27.

“Whether to give up or not is a privilege,” he said. “A lot of people don’t have that; they’re just trying to survive one day to the next.”

In his three talks on Oct. 27, Wallis spoke about hope, change, racial geography, and much more.

“People of faith are the ones who can stop trains,” Wallis said. “What are the trains you can stop? We have the people already who believe that we’re going to get there. What I’m talking about is acting to stop the trains.”

In her opening worship sermon, Bishop LaTrelle Easterling set the tone for the Summit by stating that the church had not only lost its way in confronting the sins of racism, but it is the church who is called to lead the world forward.

Time and again, participants at reCall were challenged by the speakers on issues dividing our country. McMickle, a Southern Baptist with deep roots in the local church and in advocacy, spoke during three sessions on how Jesus called his followers to be “witnesses.”

“Do you see what’s happening in our country?” he asked. “You know the saying: ‘If you see something, say something.’” It’s at this point, he said, that courage comes in. And it’s also at this point that  the church falls short, especially the preachers.

WATCH: One-minute video from Marvin McMickle on being a witness for Christ.

That suffering results from παρρεσια, the Greek word “parresia,” which means speaking truth to power or, as McMickle said, “bold speech without regard for the safety of the speaker.”

Taking it further, McMickle asked the preachers in the room about their sermons. “If every sermon is well received,” he asked, “what are you saying?”

McMickle spent one of his sessions expounding on where Christ’s followers are called to be witnesses.

“Jesus intentionally sent his disciples to places and people he knew they did not want to go,” McMickle said. “So, fix in your mind, if you will, from outside the front window of your church, who are the people and where are the places you would never ask your church members to go?”

And if we really believe that God created the heavens and the earth, as recorded in Genesis, McMickle said, then there are no places on earth where we shouldn’t also be God’s witnesses.

“God lays sovereignty to everything God made,” he said. “God has no favorite nation, no favorite race, no favorite nothing. You are not just patriots, you are witnesses to the global God who has the whole world in his hands.”

Wallis brought a similar message as McMickle. Noting that President Lincoln, years ago, appealed to “our better angels,” he said that recent events have shown just how close to the surface our demons are.

“Jack is out of the box,” Wallis said. “There’s a direct strategy of fear, led by Washington, trying to evoke fears, resentments and hatreds of the ‘other.’ The elephant in the room is, that by 2040-something, we’ll no longer be a white majority nation. We’ll be a majority of minorities. A lot of white folks have no idea how to deal with that.”

Wallis agreed with McMickle that it is long past time for preachers and pulpits to change the world, adding that pulpits don’t change the world unless they spark movements of ordinary citizens.