With the Special Session of General Conference less than five months away, Bishop LaTrelle Easterling has a message for her flock: be informed, be engaged, be pro-active.

The four-day meeting, Feb. 23-26, will take place in St. Louis, Mo., to receive and act on a report from the Commission on a Way Forward. The 32-member Commission was authorized by the 2016 General Conference and appointed by the Council of Bishops to examine paragraphs in The Book of Discipline concerning human sexuality and exploring options to strengthen the unity of the church. 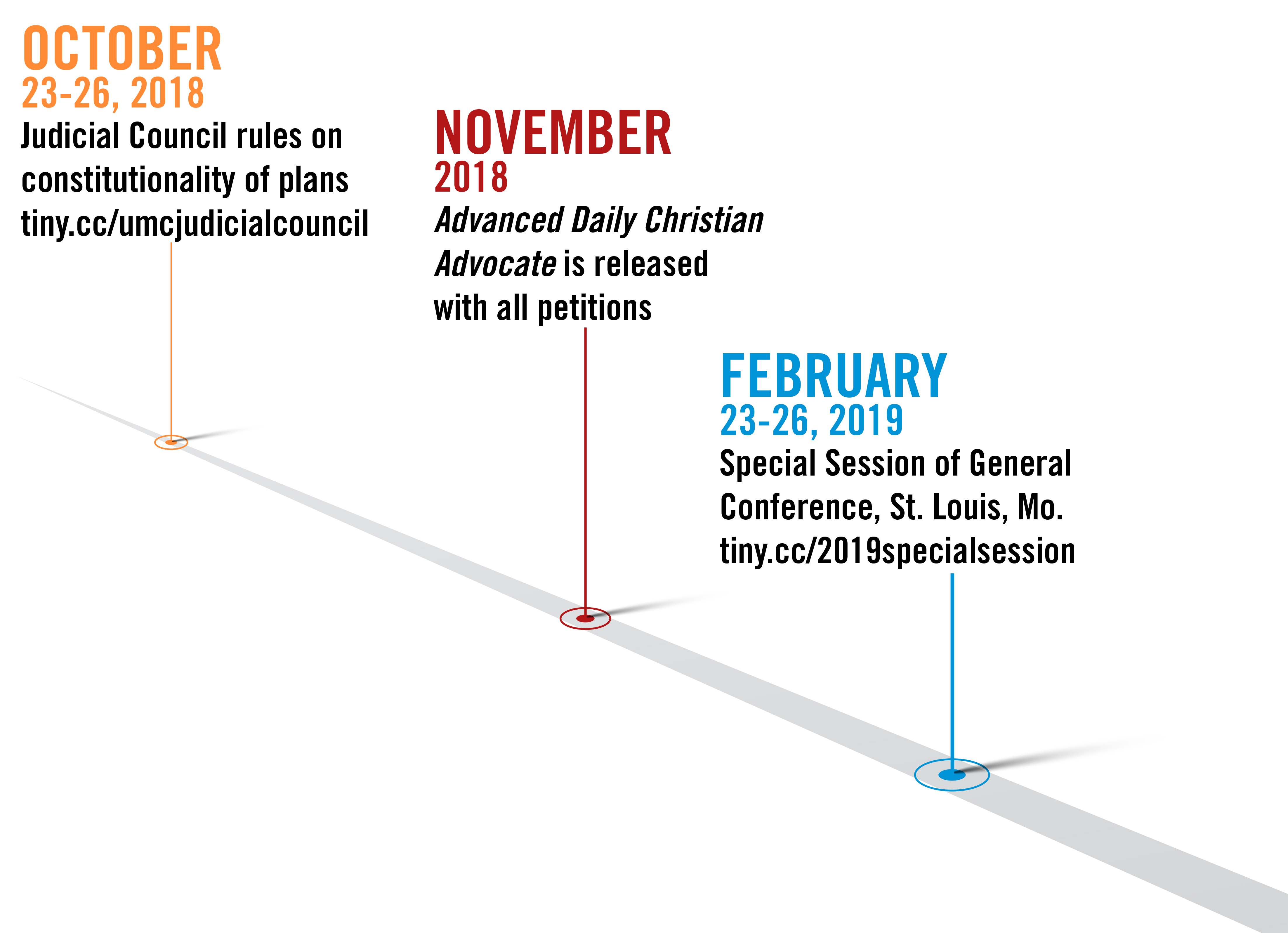 The bishop wants clergy and local churches talking about it now, rather than later … or, even worse, not at all.

“For me, right now, it would be unacceptable for any pastor serving in the Baltimore-Washington Conference that has not made themselves aware of the plans and can answer some basic questions about the plans,” said Bishop Easterling. “What would also be unacceptable to me is that churches are not sharing information from sessions like today.” 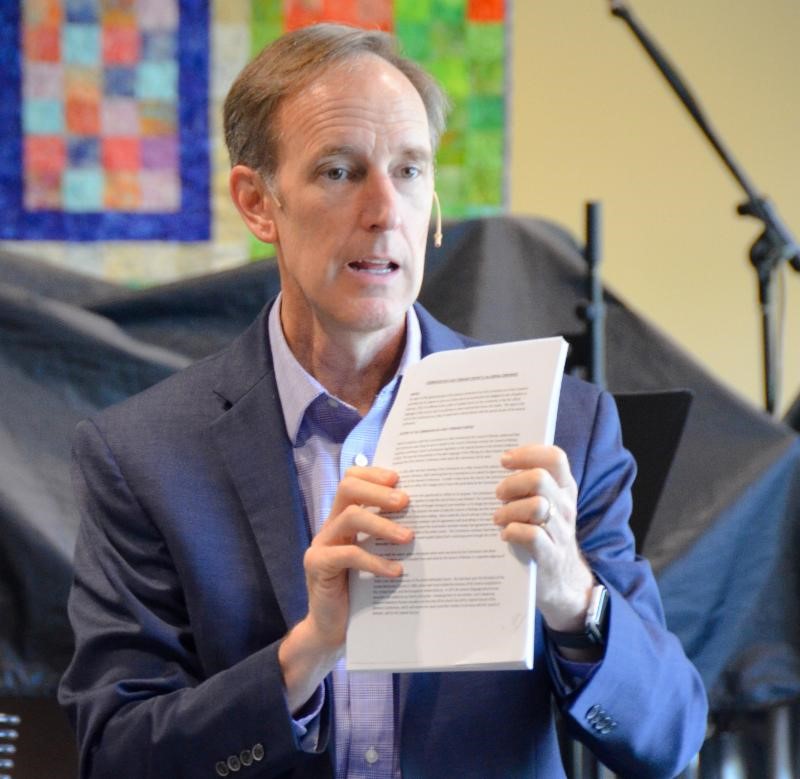 The bishop was referring to a time of listening and conversation with the Rev. Tom Berlin, held Sept. 15, at Nichols-Bethel UMC in Odenton. Berlin, pastor of Floris UMC in Herndon, Va., was a member of the Commission. He spoke for an hour at the 2018 Annual Conference Session of the BWC in Baltimore; he spoke for nearly three hours at Nichols-Bethel. (Both sessions are at www.bwcumc.org/commission-on-a-way-forward.)

Bishop Easterling noted that the denomination has been talking about human sexuality since restrictive language was the Book of Discipline in 1972. The current iteration of conversation began after the 2016 General when the   Commission was formed.

“ been different levels of interest and access of this information,” said the bishop. “But as far as I’m concerned, the   time has come where everyone needs to be aware of the conversation our denomination is in, and the very important   decision that is about to be made.”

Berlin echoed the bishop’s concern, saying that he’s been urging clergy and lay leaders for a long time to have . The problem becomes, he said, of how do you do that?

Berlin began his presentation by noting that there are United Methodist churches in 95 percent of the counties in the United States, in states red, blue, and purple, and in countries in Africa where homosexuality is illegal and punishable by death. Into that context, then, comes the choices United Methodists must make.

The bishop said that it was important to remember that in this long-running conversation, the church is not merely talking about facts, statistics, and figures. In fact, she said, “Wherever we fall on the spectrum of theological ideology, it remains true that we are talking about our brothers and sisters in Christ.”

The One Church Plan, Bishop Easterling said, received overwhelming support from the Council of Bishops. After a review by the Judicial Council, she said, all three plans – the Traditional and Connectional Conference plan being the other two – will come forward to the Special Session “in one way or another.”

"I whole-heartedly endorse and fully support the One Church Plan."  - Bishop LaTrelle Easterling

The plans, and thus the choices to be made, vacillate between two points, Berlin said, between “law” and “grace,” and between “centralized” and “decentralized.” “Which side of the polarity must the UMC now lean into in order to live into its next guiding story?” he asked.

Berlin outlined three plans — two of which were written by Commission members, including himself as part of a writing team (One Church and Connectional Conference; the Traditional Plan was written by “a few bishops,” according to the report) — that are slated to come before the Special Session. The plans, in the four official languages of The United Methodist Church, are available at www.bwcumc.org/resources/commission-on-a-way-forward/.

The One Church Plan was overwhelmingly supported by the Council of Bishops, who stated in a May 4 press release, “The values of our global church are reflected in all three plans. The majority of the Council recommends the One Church Plan as the best way forward for The United Methodist Church.”

Bishop Easterling was clear that she supports the One Church Plan.

“I endorse and fully support the One Church Plan,” she said at the Nichols-Bethel event. “I think it allows us to concretely and faithfully continue what we’ve already been doing since 1972. We have not agreed on all things theological … but we have found ways to live with one another. It gives us room to serve our communities and one another while still being able to live out our biblical understanding, our scriptural interpretation, but with the strength of a united body.”

The Traditional Plan, Berlin said, streamlines the process to enforce penalties for violations of the Book of Discipline related to marriage and ordination of self-avowed, practicing homosexual persons, maintains the current structure of the church, and continues the current relationships between the church and all general agencies and commissions.

This plan, said Berlin, comes from the idea that The United Methodist Church ought to have one unified stance on issues related to marriage and sexuality.

The Connectional Conference Plan creates three values-based connectional conferences: traditional, unity, and progressive, Berlin said. What that means, he said, “is that we would take all United Methodists and all annual conferences … and say, ‘You can be in one of these three (value-based) groups.’”

The three groups, he said, are divided only by this topic. In the traditional group, there can be no same-gender weddings and no homosexual clergy. In the unity group, it would be more like the One Church Plan, Berlin said. In other words, when it comes to same-gender weddings and homosexual clergy, “all can, no one must; some will, some won’t.” And in the progressive group, “all shall,” he said.

Also, the majority of the current general boards and agencies of the church go away, Berlin said. “The reason? You can’t afford it if we all go our separate ways.”

Berlin said that there are three possible outcomes from the 2019 Special Session: “No change; one of these models could be or a third thing is that a hybrid of these models and some idea that the Commission didn’t think of could be chosen.”