General Conference 2020: Plans and Legislation at a glance

In May 2020, the United Methodist General Conference will convene in Minneapolis, Minnesota. (Read news stories about the Conference here.) Following a contentious 2019 Special Session of General Conference, in which the Traditional Plan was adopted, maintaining that homosexuality is “incompatible with Christian teaching” and increasing penalties for self-avowed gay clergy and clergy who officiate same-sex weddings, the 2020 General Conference will again revisit these issues. Numerous plans and proposals have been or will be submitted. This page offers you information at a glance, along with links to take you deeper. This list is not exhaustive and will be updated from time to time. If you have any comments or questions, please submit them to Erik Alsgaard at .

United Methodist News Service produced a comparison chart in early November 2019, explaining each of the proposals in brief. A thumbnail of the PDF is below, and the link to access the whole document is below the thumbnail. 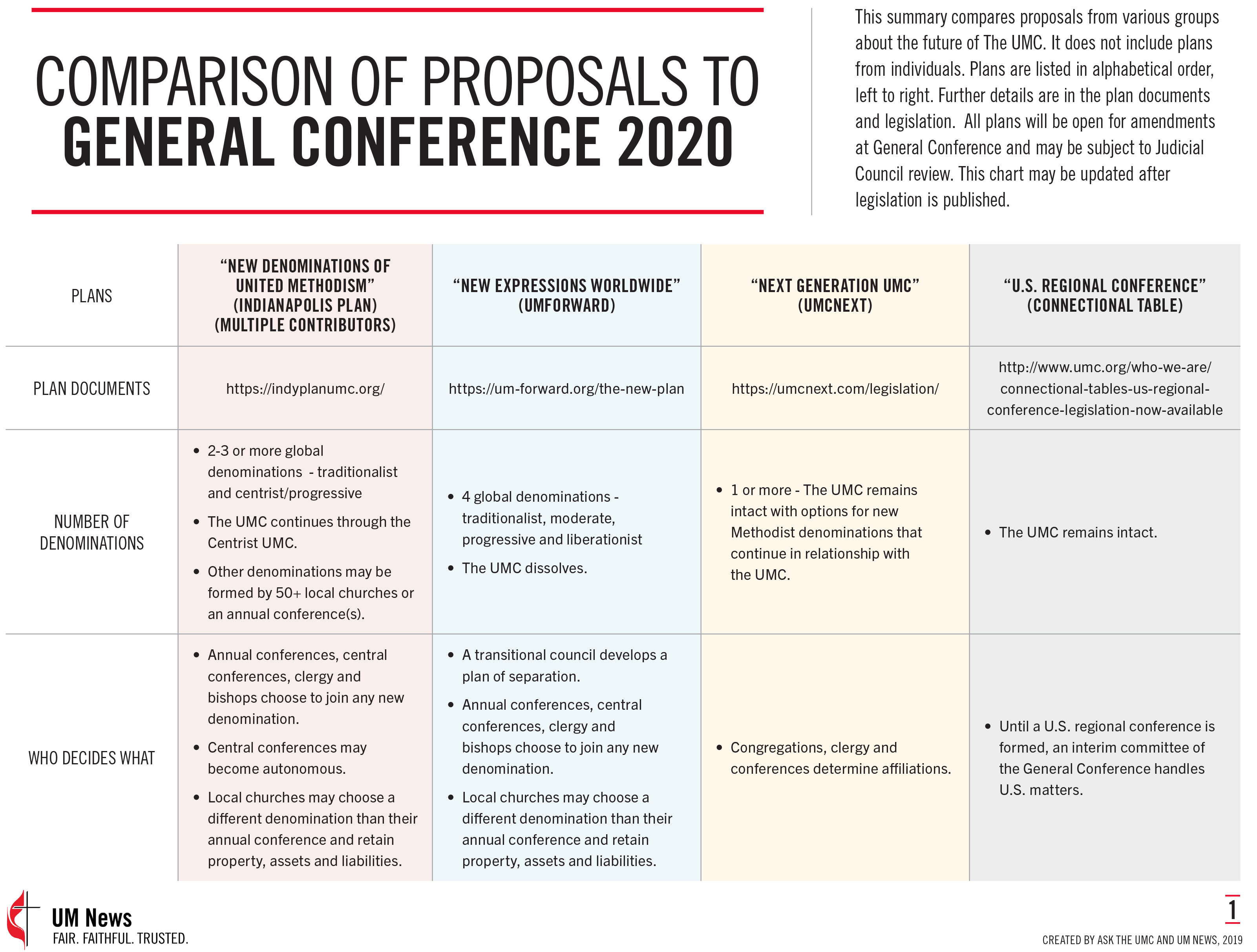 READ a Dec. 10, 2019 story from United Methodist News Service that provides context on what's coming to the 2020 General Conference.

The following list, adapted and expanded upon from a report originally published on the Minnesota Area of The United Methodist Church website, is not exhaustive but includes plans that have been distributed publicly. Additional proposals have been submitted. They will be published in the Advance Christian Daily Advocate (planned to be released in February), and will also be available for consideration by General Conference delegates.

The United States as a Regional Conference:

Summary: This legislation would create a new structure, a regional conference, for churches in the United States. Under this proposal, U.S. United Methodists would vote on initiatives that solely affect the United States and leave General Conference to address truly global matters. The regional conference would have the power to make some changes to the Book of Discipline, excluding portions that a General Conference may designate “non-adaptable.”
Learn more: Plan proposal  | FAQ | Narrative | Press release – July 23, 2019

Summary: This legislation envisions a Traditionalist United Methodist Church that would maintain the denomination’s current restrictions on same-sex weddings and ordination of gay clergy. A separate Centrist/Progressive United Methodist Church would remove those restrictions, as well as church teaching that the practice of homosexuality is incompatible with Christian teaching. The legislation holds out the possibility of a third denomination, a Progressive United Methodist Church, that would practice immediate full inclusion of LGBTQ persons.  As part of the new conservative-leaning church, the Wesleyan Covenant Association has published a draft of a proposed new Book of Discipline. Read it here.
Learn more: Plan proposal | UMNS report – August 13, 2019

Summary: This legislation would keep intact The United Methodist Church as a denomination while allowing for greater regional autonomy across the connection. The doctrinal standards in the The Book of Discipline would be retained, but the language and policies that have excluded LGBTQ persons would be removed. Pastors would be able to determine if a couple is ready for marriage and it would be up to annual conferences to determine if a candidate meets the criteria for ordination. This proposal calls for the passage of proposed legislation that would create a U.S. Regional Conference to deal with matters affecting only the U.S.
Learn more: Plan proposal | UMNS report – August 19, 2019

Summary: This legislation would dissolve The United Methodist Church and form four new global denominations instead. The new Methodist expressions would be traditionalist, moderate, progressive, and liberationist in orientation. A special General Conference before 2024 would take up the plan of separation, and a moratorium on complaints, charges, and church trials related to the church’s restrictions around homosexuality would be in place until separation occurs.
Learn more: Plan proposal | UMNS report – September 25, 2019

Summary: This legislation proposes a period of discernment leading to the creation of “fresh expressions of Methodism” that various like-minded groups could form. Each new form of Methodism would remain in full communion with The United Methodist Church through at least 2028 and potentially beyond, meaning that each would accept the validity of the others’ baptism and ordination, but the denominations would not be forced to accept each other's doctrine, polity, members, or ministers. The plan also includes a “gracious exit” option for churches that don’t want to commit to the “gracious affiliation” process this plan calls for.
Learn more: Plan proposal | Executive summary | Plan timeline

Summary: This legislation asks General Conference to allow further study with the goal of developing a new form of church organization that creates unity in mission while allowing for contextual ministry in matters that divide us, including ministry with and the full inclusion of LGBTQ persons. The legislation calls on the Connectional Table and the Standing Committee on Central Conference Matters to collaborate on this effort and supports proposed legislation that would create a U.S. Regional Conference to deal with matters affecting only the U.S.
Learn more: Plan proposal | UMNS report – October 2, 2019

Who represents the Baltimore-Washington Conference at the 2020 General Conference? Six laity and six clergy were elected at the 2019 Annual Conference Session. Learn more and see the names.