Bishop Gregory V. Palmer laid out a path for the 2016 United Methodist General Conference: humility, humility, humility.“Everyone here is a child of God. Any behavior to the contrary of that truth undermines the gospel and is a choice to live beneath our privilege,” Palmer, who serves the West Ohio Episcopal Area, said in the episcopal address on May 11. The Council of Bishops chose Palmer to deliver this speech, which he said was an opportunity to try to set the tone for the gathering. 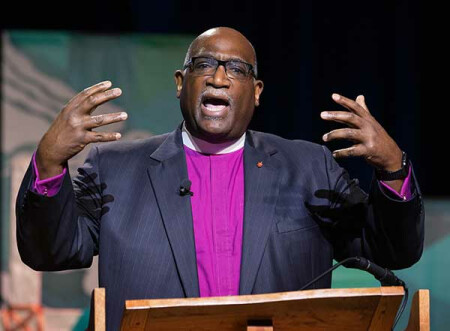 “Our capacity to turn on each other is destroying the soul of this church and under-serving the mission,” he said.

“It needs to be said that the 2012 General Conference took something out of this church in dramatic proportions,” he said. Many said it was a waste of time and resources; others were discouraged and disappointed.

However, The United Methodist Church has participated in life-changing and life-giving ministry, he said.

Palmer lifted up major accomplishments of the denomination:

“But all of us who are a part of General Conference 2016 have been called here by God who we believe continues to be at work in and through The United Methodist Church.”

The theme for the worldwide gathering is “Therefore Go” based upon the Great Commission in Matthew 28:19-20. Palmer said the church’s mission statement aligns with that Scripture: “Make disciples of Jesus Christ for the transformation of the world.”

“If this General Conference pays mere lip service to the Great Commission or to our denominational mission statement, we will have failed,” he said.

Palmer said too many United Methodists are fearful about the survival of the church as an institution.

“Our theme and our mission statement are a rallying cry to get out, act together and get focused on what God is focused on — which is nothing less than new creation for people, nations, cultures and the earth,” he said.

Paragraph 122 in the Book of Discipline outlines a process for carrying out our mission, he said.

The steps , lead, nurture, send and continue. “We do not get to cherry pick which ones to follow,” he said.

It will take a full-time church to nurture full-time Christians.

“We have been called to this work and commissioned to do it. … The only unanswered question is will we go,” he said.

Trust God and go, he said.

“We have nothing less than the promise of the risen Christ that he will be with us.”

The promise doesn’t depend on geography, on language, ZIP codes, seminary degree or a certificate.

Gilbert is a multimedia news reporter for United Methodist News Service. Contact her at (615)742-5470 or  .