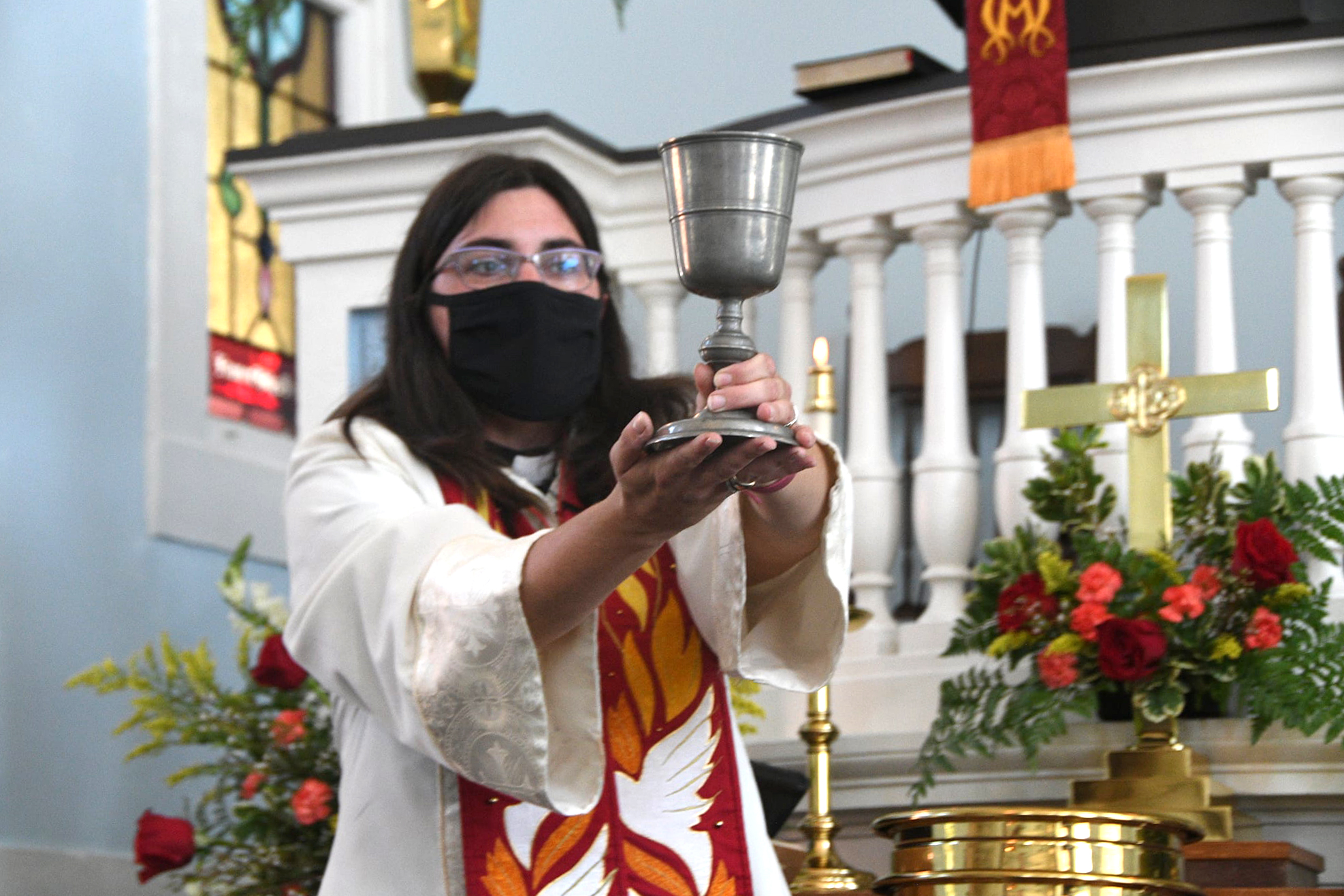 Two hundred and fifty years ago, when Methodism’s second bishop, Francis Asbury, arrived in the New World, members of a United Brethren in Christ congregation were waiting in Baltimore to meet him.

Led by the Rev. Benedict Schwope, and then Rev. Philip Otterbein, the congregation created a spirit of Christian fervor, unity, and faithfulness that laid part of the foundation for what, centuries later in 1968, would become The United Methodist Church.

On Sept. 19, church members and denominational leaders joined Bishop LaTrelle Easterling and Baltimore Mayor Brandon Scott in celebrating the 250th anniversary of Old Otterbein UMC. The church, Scott noted, is the oldest church building in continual use in Baltimore. The German-speaking congregation was formed in 1771. The building’s foundation was laid in 1771 and the edifice was completed in 1785.

Bishop Easterling praised the generations of members of Old Otterbein, those in the Evangelical United Brethren tradition, and the “fortitude of countless brave souls who passed through myriad denominational iterations.”

“We are gathered here today,” she said, “because though tensions within denominations, disagreements with judicatories, schisms and mergers have existed within every time and generation, ministry was not interrupted because the people of God did not succumb to such divisions, nor abandon their faith.”

“We celebrate the past to awaken the future”, said Easterling, quoting President John F. Kennedy.

“We gather as a worshipping community – praying, proclaiming and practicing our faith – to testify that the Word of God never returns void,” she said. “We gather as a people committed to this present generation, heeding the timeless commandment of Jesus Christ to go out into all the world, baptizing them in the name of the Creator, Sustainer and Redeemer, and teaching them all that has been commanded: to love with an everlasting love, to serve and never count the cost, to offer God the first fruits of all that exists, and to transform the world.”

General Secretary Ashley Boggan Dreff, who leads the denomination’s Commission on Archives and History, celebrated how the church’s founders, Phillip Otterbein, Frances Asbury, John Wesley and Martin Boehm preached a religion of reform that moved beyond traditional teachings of the day to “emphasize the heart of religion.” They each, influenced by the faith of their mothers, understood that religion was more than what you believe; It is how you enact that belief.”

Their ministries “drastically changed the religious landscape of America.” In honoring that landscape, Boggan Dreff lifted up the names of four women who also contributed to the laying of our denomination’s spiritual foundation.

These four women continued in the tradition building the foundation, “laying stone upon stone.” “We can use the lens of our past to envision our future,” said Boggan Dreff, who encouraged all those present to allow “the Spirit to overwhelm us in ways that bring new works of God.”

For the Rev. Bonnie McCubbin, the BWC’s Director of Pilgrimage and Museums, who also serves as the 55th pastor of Old Otterbein UMC, balancing the witness of the past with the possibilities of the future presents a powerful, life-affirming tension.

During the Communion service, she lifted the Communion cup that Bishop Otterbein used – giving thanks for the pioneers of faith and recommitting the congregation’s gifts to the ministry journey ahead.

“This congregation was created by forward-thinking persons to serve those who were not welcome in other churches, be it for their beliefs, preference for the German language, or their heritage,” McCubbin said. “Over the years, the congregation has continued to welcome immigrants, migrants, unhoused persons, and visitors. As a Reconciling Congregation, the congregation has made a stand to journey with the LGBTQIA+ community. I know that in the future, all people, regardless of their needs or beliefs, will continue to not only be welcome here, but also be included in leadership. We are not just a historic church with a museum, but a living and breathing congregation ready to be the hands and feet of Jesus in the world today.”

As part of moving into their next 250 years of ministry, the church has started the Friends of Old Otterbein to raise funds for the building’s ongoing preservation and upkeep. The fund was the brainchild of Bishop Joseph Yeakel, a former leader of the Evangelical United Brethren Church and United Methodist bishop, who died in June. Bishop Yeakel, Easterling said, stood for inclusion and justice, two elements this Reconciling Congregation embraces.

As the service drew to a close, outside, on the street, people were streaming on the sidewalk past Bishop Otterbein’s gravestone, on their way to a Ravens football game. The church sits in a busy downtown area, just a long flyball from Orioles Park. This feels right to Bishop Easterling. “We gather today to make our witness relevant by seeing all the people, listening to their needs and working with them to resurrect this great city,” the bishop said. “Then in 250 years, though our bodies will not be laid to rest on these hallowed grounds, our legacy will live on, and it will be said that we kept the faith, finished the race and bore lasting fruit.”