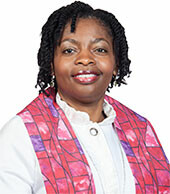 On Jan. 16, the Rev. Cynthia Moore-Koikoi, superintendent of the Baltimore Metropolitan District, took her first major step in being considered for the episcopacy in the Northeastern Jurisdiction of The United Methodist Church.

She was endorsed by the Baltimore-Washington Conference delegation as its candidate for bishop. This endorsement will be voted on by the clergy and lay members of the annual conference when it meets June 1-4 in Washington, D.C.

If elected by a two-thirds majority there, Moore-Koikoi will be the Baltimore-Washington Conference’s candidate and will advance to be considered by the members of the Northeastern Jurisdictional Conference, which meets July 11-15 in Lancaster, Pa.

Qualities of a Bishop

As part of the discernment process, the BWC delegation supplemented the disciplinary requirement for a bishop with a list of its own “qualities and characteristics of an episcopal candidate.” They included:

The NEJ Conference, to which the BWC sends a delegation of 24 voting members, is expected to elect one bishop, following the retirement of Bishop Marcus Matthews, the resident bishop of the Washington Area. Bishop Matthews is currently the only active black bishop on the NEJ College of Bishops.

The new bishop could be appointed to serve in any of eight Episcopal Areas from as far north as Maine to as far south as West Virginia.

Moore-Koikoi, who is African-American, said she is excited about being about to bring her unique voice to the College of Bishops.

A child of the United Methodist Church who grew up with a clergy father, Moore-Koikoi began her professional life working for 17 years as a school psychologist and was ordained a full Elder in 2010.

She has served St. Matthews UMC in Baltimore, a congregation with an average worship attendance of 26; as associate pastor of Calvary UMC in Annapolis, which had an average worship attendance of 548; as a Guide for the conference, working with churches and pastors to equip them in making disciples; for one year as the superintendent for the Greater Washington District and three years as superintendent of the Baltimore Metropolitan District.

She also serves as the chair of the conference’s Unified Funding Task Force and as the Cabinet’s spiritual director.

Moore-Koikoi said she sees the work of bishops as “overseeing the work of the church, working prophetically, evangelically, and apostolically with all as they cooperate with the grace of God and leave space for transformation.”

Among her many gifts, she believes the ones that might serve her best as a bishop are her deep and abiding spirituality, her knowledge and practice of empowering churches to move beyond the numbers of membership to focus on discipleship, her conviction in the sacred worth of all people and her ability to authentically and faithfully engage with a vast variety of people in the church and community.

“I am excited about the future of our denomination and the ways in which God will continue to transform the UMC and use it to transform individuals, groups, organizations, institutions, and systems,” Moore-Koikoi said. “I am humbled that the BWC delegation believes that God has given me the gifts a bishop needs to lead our denomination at this time in its history.”

The BWC delegation also considered the Rev. J.W. Park, superintendent of the Central Maryland District and Dean of the Cabinet, who asked to be considered for an endorsement to the episcopacy. Park did not receive the necessary two-thirds of the vote to move ahead.

The delegation’s endorsement is considered important because of the extensive discernment process built into it. This fall, Conference clergy participated in a month of discernment about their possible call to the episcopacy. Moore-Koikoi and Park submitted 500-word statements about their call to the delegation. [http://bwcumc.org/bwc-pastors-offer-themselves-as-episcopal-candidates] On Jan. 16, the pair each spoke to the delegation about this calling and answered a series of questions from the delegates, who then participated in a time of conversation and discernment before voting.

The delegation based their discernment on the qualifications and duties of a bishop outlined in the Book of Discipline in paragraphs 414-416 and 405.2 and on a set of standards they developed about what qualities are necessary in an episcopal leader. (See sidebar.)

At the annual conference session in June, a detailed set of rules, laid out in the DEEP report in the 2015 Conference Journal, will be followed.

According to these rules, clergy members may be nominated from the floor of annual conference. Anyone elected from the floor will be required, within four hours, to submit a statement about their call to the conference secretary, who will distribute it to the members. A time for discernment will be provided. Before voting, the candidates will have three minutes to address the body.

Members will vote electronically on endorsing Moore-Koikoi, and any potential candidate(s) nominated from the floor. A 66 percent majority is necessary for endorsement.

The conference may elect to send one, more than one, or no candidates for bishop to the Jurisdictional Conference.

In addition, caucuses in the Northeastern Jurisdiction may endorse a candidate from the Baltimore-Washington Conference or any of the other nine annual conferences in the Northeastern Jurisdiction for the episcopacy. The five official United Methodist ethnic caucuses include: Black Methodists for Church Renewal, MARCHA (Metodistas Asociados Representando la Causa de los Hispano-Americanos), the National Federation of Asian American United Methodists, the Native American International Caucus and the Pacific Islander National Caucus of United Methodists.

At the last Jurisdictional Conference, 19 candidates were endorsed and considered. Three were elected as bishops.

In 2016, it was originally thought that two bishops might be elected. Bishop Marcus Matthews is retiring and Bishop Martin McLee died in September 2014. However, a decline in membership in the Jurisdiction triggered the General Conference to eliminate one of the episcopal areas.