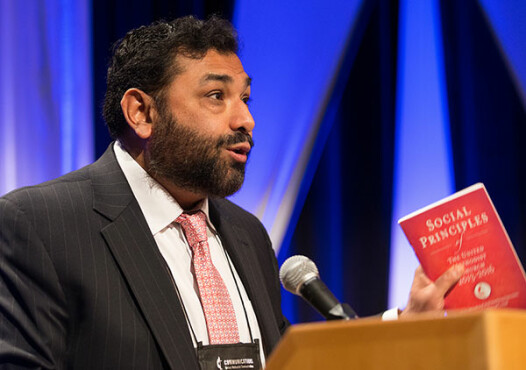 In preparation for the 2016 General Conference of The United Methodist Church, 400 denominational leaders gathered in Portland, Ore., Jan. 20-23, for a preview of the quadrennial event at which the church will shape its future.

+ Church restructuring – Among the most well-known proposals is Plan UMC, which was passed by almost 60 percent in but was ruled unconstitutional by the church’s Judicial Council. The factors that made it unconstitutional are revised for 2016.

This plan gives the Connectional Table power to elect and evaluate top executives, eliminates the General Commission on Archives and History and moves its functions to the General Council on Finance and Administration, and eliminates the commissions on Religion and Race and the Status and Role of Women and creates a committee, under the Connectional Table, called the UM Committee on Inclusiveness.

+ The General Board of Global Ministries is proposing the creation of a Southeast Asia and Mongolia Provisional Central Conference.

+ The Association of Annual Conference Lay Leaders is proposing legislation to empower annual conferences to determine their own structures.

+ The Standing Committee on Central Conference Matters is working with other groups to develop a truly global Book of Discipline.

+ The General Board of Church and Society is revising the denomination’s Social Principles to better speak to the human issues in the contemporary world.

+ The Association of Annual Conference Lay Leaders is calling for limited tenure for bishops. Bishops worldwide would be elected for eight years and could run again for another eight-year term.

+ The 2013-2016 Ministry Study Commission is proposing reshaping the ordination process by moving ordination to the front end of the process – at the time a candidate is elected to provisional membership.

+ Discipleship Ministries is proposing a new, first-of-its-kind hymnal that would use digital technology to provide music and worship resources.

+ Several petitions ask The United Methodist Church to withdraw from membership in the Religious Coalition for Reproductive Choice.

+ Several petitions ask the General Board of Pensions and Health Benefits to divest from investments in fossil fuels and investments from companies involved in the Israeli-Palestinian conflict.

A report on the new, global nature of the church that suggests possibilities for re-structuring the Book of Discipline; a guide, called Plan UMC, for restructuring church agencies; a ministry report reconsidering ordination and the “provisional status” of clergy; recommendations to significantly revise the Social Principles; the creation of a new customizable, cloud-based hymnal; and the draft of “Wonder, Love and Praise,” a study that defines what it is to be United Methodist, are all on the agenda for the delegates. (See sidebar.)

However, the majority of these issues, with the exception of Plan UMC, will be finalized at the 2020 General Conference.

For many in Portland, the focus of the preview was on how the church will address issues of human sexuality when the 864 delegates meet May 10-20 at the Oregon Convention Center.

Of the 1,044 resolutions received for the delegates to vote on, 99 of them center on issues concerning the LGBT community. Among these, much of the focus is on the denomination’s current stance against the marriage of same-gender couples, the ordination of gays and lesbians, and the statement in Para. 304.3 of the Discipline that “homosexuality is incompatible with Christian teaching.”

To address these issues, some groups, like the Baltimore-Washington Conference, have sent resolutions calling for the striking of language and practice that discriminates against the LGBT community from the Book of Discipline.

Others are proposing what’s called a “Covenantal Unity Plan” that calls for full accountability for pastors who violate the letter of the law outlined in the Book of Discipline and provides a way for those who object to current church law to “disaffiliate without the loss of property and in a ministry-affirming way.”

A proposal, developed by the Commission on the General Conference, will come before the delegates to allow them to consider these resolutions in an alternative process that moves beyond Robert’s Rules of Order and focuses on the United Methodist spiritual discipline of holy conferencing.

Dubbed “Rule 44,” this process, if adopted by the delegates, would divide the delegates into circles of no more than 15 people who would participate in Christian conferencing to discuss questions concerning the spirit of the resolutions concerning LGBT people. A written record of their conversations would be made.

A writing team would then sift through these conversations, discerning if any consensus had been reached on an issue. If a consensus is achieved, it would be adopted as the official stance of the denomination. (See pages 93-101 on the Group Discernment Process and Discussion Guidelines, in the Advance Daily Christian Advocate.)

This process is tailored to avoid a “winners and losers” approach to decision-making and focus more on creating a spiritual setting for discernment. This new alternative to the legislative process requires trust, said Gere Reist, the General Conference secretary.

At the plenary session, where the process outlined in Rule 44 was tested, Reist acknowledged that the delegates might not be comfortable with trusting some of the other delegates, nor fully on-board with the process.

It the process is not approved by a majority vote the delegates, legislation will be considered in the traditional fashion, using Robert’s Rules of Order.

In addition to dealing with ministry, mission administration, the General Conference will be voting on a $611.4 million budget to support apportioned general funds for 2017-2020, a 1.4 percent increase over this quadrennium. However, with projected inflation, said GCFA General Secretary Moses Kumar, that budget actually represents a 7.2 percent spending decrease in real dollars.

Local churches pay this money. Of every dollar put into the collection plate, 85 cents stays in the local church. Of the remaining 15 cents, less than 3 cents find their way to general agencies.

One interesting note for those in the Northeastern Jurisdiction, which is currently slated to lose a bishop in the next quadrennium: this reduction is expected to save $1.3 million over four years.

This session of General Conference is expected to cost more than $10,533,000. The changing global nature of the denomination and the growing number of members in Africa account for some of the expense. Approximately $2.3 million will be spent on language translation and interpretation. The average travel cost per U.S. delegate in 2012 was $493, while the average cost for Central Conference delegates was approximately $3,000 each.

In 2016, 504 delegates will be from the U.S. and 350 will come from the central conferences. (Ten are concordat members.) The Baltimore-Washington Conference will send six clergy delegates and six lay delegates.

This year, there is a resolution that would ask United Methodists from the Central Conferences to begin paying $4.24 per member in apportionments toward the Episcopal and General Administration funds.

The theme of the General Conference session is “Therefore Go,” which builds on Jesus’ words in the Great Commission in Matthew 28:19-20.

The Rev. Steven Lewis, an Oregon pastor, preached at the opening session. “We are the incarnational realities of God. We are United Methodists, let us live that way,” he said. “Few will read what we write, but millions will watch what we do.”

Links will open in a new tab.