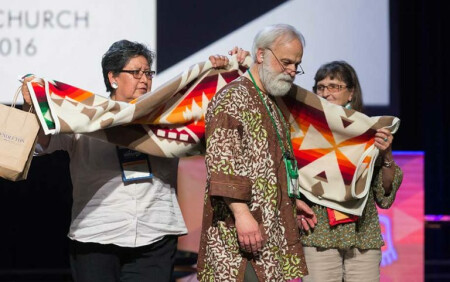 The Rev. L. Fitzgerald “Gere” Reist II (center) is honored for his years of service as secretary of the United Methodist General Conference during the denominational meeting May 20 in Portland, Ore. Presenting him with a blanket are Cynthia Kent (left) and Raggatha Calentine. Photo by Mike DuBose, UMNS.

“We will not leave divided because God is not finished with us yet!” Mountain Sky Area Bishop Elaine Stanovsky reminded those attending day of the 2016 General Conference.

She concluded that the real work happens once the 10-day event has finished and gave the delegates an assignment to “choose life” as they talk about what has happened here in Portland.

A large group of LGBTQ people circled the floor of the 2016 General Conference on May 20, singing, “I am not forgotten, you are not forgotten; God knows your name.”

Participants said the respectful demonstration was the final chance for LGBTQ people to surround and support each other before everyone leaves General Conference and returns to their local churches.

“Queer people got no justice from this General Conference. … This was an attempt to let them know we are still here,” said Jayson Dobney, an advocate for LBGTQ people in The United Methodist Church.

After prolonged, impassioned debate, delegates chose not to add a fossil fuels investment screen for the United Methodist Board of Pension and Health Benefits. The question came down to divestment vs. engagement as the better way to use church investments in influencing energy companies to address climate change. Ultimately, delegates voted 630-101 against amending church law to call for screening out investments in fossil fuels companies.

An amendment offered during debate on socially responsible investing that sought to divest from illegal settlements on occupied lands failed 559-167. Earlier in the General Conference, the Financial Administration Legislative Committee failed to support any petition calling for divestment from companies doing business in Israel. Delegates also adopted an amended petition on behalf of a Palestinian village, Wadi Foquin, where United Methodists support an Advance project and community development site. The petition calls on General Conference to send letters to U.S. Secretary of State John Kerry and other State Department officials, U.S. President Barack Obama, the U.S. Consulate in Jerusalem and the Israeli Civil Authority to express “our concerns over the confiscation of land and destruction of life in the village.”

By a vote of 509-242, delegates just exceeded the two-thirds threshold needed to support amending the article on “Inclusiveness in the Church” in the denomination’s constitution. The amendment adds “gender” and “age” to the list of qualities that will not be discriminated against in the life, worship governance of the church. The amendment is structured to preserve United Methodist groups based on gender or age, such as church youth groups. Now, the constitutional amendment heads to annual conferences, where it needs two-thirds of the total vote of members to be ratified.

If you’re keeping score at home, the last piece of legislation voted on by General Conference 2016 was the passage of a resolution to update and combine several existing resolutions in the section “Caring for Creation: A Call to Stewardship and Justice” from the Book of Resolutions.