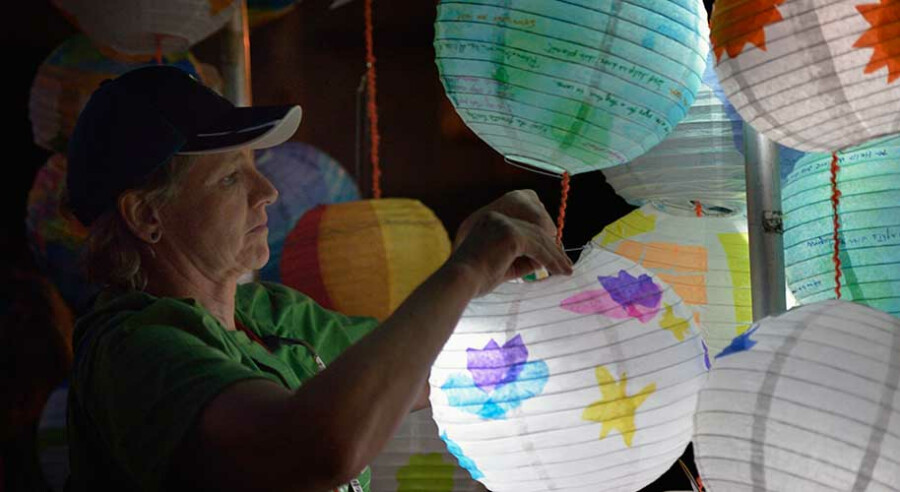 The Rev. Cindy Roberts disassembles lanterns following a May 12 climate vigil outside the 2016 United Methodist General Conference in Portland, Ore. The lanterns were lit with a small solar light that following the vigil were sent to community groups in the Philippines, the Democratic Republic of the Congo, and the United States. Donohew is pastor of Brownsville UMC in the U.S. state of Washington. Photo by Paul Jeffrey, UMNS.

After several days where General Conference delegates were clearly divided over Robert’s Rules vs. Group Discernment and placards vs. iPads, on Day Four, they were urged repeatedly to work together, and examples of the good the church can do when it heeds that advice.

Lay members of The United Methodist Church admonished their peers who are delegates to General Conference to remember that they share in the responsibility of making disciples of Jesus Christ in the world.

The May 13 laity address included lay leaders from the Upper New York, Virginia, Missouri, Tennessee, Zimbabwe Great Plains conferences, with each sharing a sense of urgency for the people in local churches around the world to do more to share the love and mercy available to all through Jesus Christ.

“Our ongoing challenge comes from the need to embrace all that discipleship entails,” said Scott Johnson, leader from the Upper New York Conference. “Now, it would be wonderful if discipleship was only about the joy, peace wonder. But we know that following Jesus isn’t all about mountaintop moments, praise songs and potlucks.”

The remainder of the address provided thoughts how to change the status quo, using a model shared by United Methodist Discipleship Ministries. Components include showing hospitality, offering Christ to others, providing purpose in life and engaging with the world around us. 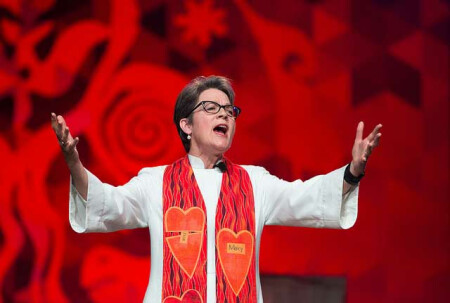 During the May 13 morning worship, Bishop Sally Dyck of the Chicago Episcopal Area said she was inspired by Pope Francis’ declaration that this past Advent would be a year of mercy, adding, “I want to be part of a church that has a year of mercy, a decade of mercy, a millennium of mercy.”

Dyck used Matthew 9:9-13, the story of the Pharisees questioning how Jesus could sit down to eat with the tax collectors and sinners, as her text.

“Jesus knew that the Pharisees believed that the tax collectors were incompatible with good Jews,” said Dyck. “And Jesus said to the Pharisees to go, learn mercy.”

Connectional Table, GCFA report on of the church

Throughout the morning, General Conference delegates heard that might surprise some: United Methodists together are doing great things that bring God’s reign into the world. Both the Connectional Table, which coordinates the work of church agencies, and the General Council on Finance and Administration, the denomination’s finance agency, gave reports that highlighted the good United Methodists they work and give as a global body.

“What are trying to do is something no other denomination is doing,” said Bishop Christian Alsted, incoming chair of the Connectional Table. “We are trying to be a worldwide church that is also democratic.”

A climate vigil, organized by the Pacific Northwest Conference and backed by a number of church-related sponsors, was held May 12 at the Oregon Convention Center’s outdoor plaza. The twilight event featured decorated paper lanterns lit by small LED lights, music and testimony from United Methodists representing the global church.

The Rev. Susan Henry-Crowe, top executive of the United Methodist Board of Church and Society, would like to see a commitment “to act in solidarity with all who struggle daily in the face of a changing climate” shared across the denomination, adding, “I pray and trust that this General Conference will reaffirm our commitment to this important and holy work.”

Delegates continued to debate whether to embrace the new electronic queuing system or go “old school” and stick with waving old-fashioned placards to get the presiding bishop’s attention.

United Methodists gathered for a lunchtime witness on May 13 at the Oregon Convention Center , calling on the Barack Obama administration to “stop deportations and keep families together.” Delegates to General Conference 2016 will consider an addition to The United Methodist Church’s Social Principles that says: “We oppose all national immigration policies that separate family members from each other or that include detention of families with children.”

The Rev. Frank Schaefer and his son Tim joined the Rev. Mike Tupper in the tent Tupper has slept in for the past 168 days to symbolize how they say LGBTQ people are kept outside the doors of The United Methodist Church. Both Tupper and Schaefer faced charges for officiating at the same-sex weddings of their children. They are in Portland praying for the denomination to change its stance that homosexuality is “incompatible with Christian teaching.”