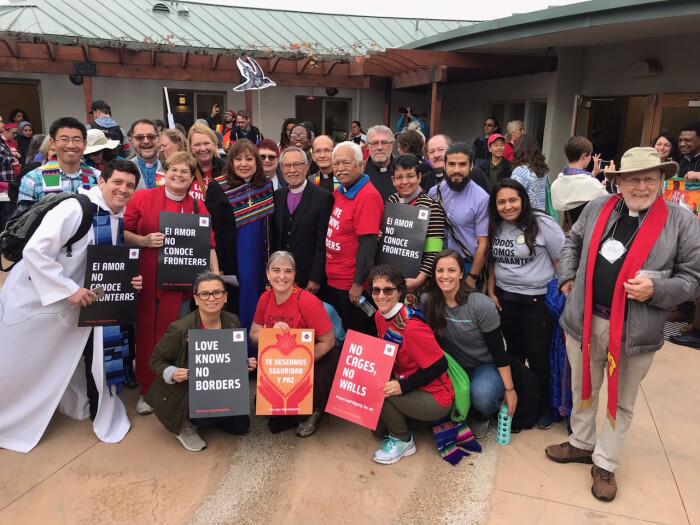 9:00 a.m. The weight of our next steps were made more real as some of those pictured above gave me their valuables for safekeeping. By the time we left the press conference at 10:30-ish, I was in possession of one Bible, three wallets, four cell phones, a wedding ring and a backpack that contained a battery with enough juice to recharge a car battery. The backpack belonged to Pastor Gavin (pictured in the white robe above and later kneeling in the ocean) who had traveled with the migrant caravan and who had used that battery to keep his cell phone charged for a week.

Soon after the picture of the United Methodist group was taken, buses were loaded based upon our role: Risk-takers first, Peace Keepers second, and then the rest of us. The Rev. Carlos Rodriguez (Peninsula Delaware Annual Conference), the Rev. Duane Anders (Oregon-Idaho Annual Conference), Lori Valentine de Segovia (Virginia Annual Conference) and I redistributed our loads to accommodate the backpacks and bags of the risk-takers and boarded a bus with our newfound friends from the Michigan Annual Conference, including the Rev. Patricia Gandarilla, Ivan Martinez, Eva and Charity.

Carlos was the designated UMC spokesperson who wasn't in the risk-taking group. On the bus, he circulated the group photo and this message crafted in conjunction with the organizers of the action as an example of what can be shared next to the picture sent previously. Each annual conference was asked to not release the picture nor message before the press conference was finished.

"UMC presence in San Diego, CA, at the "Love Knows No Borders" faith manifestation demanding the US government to:

Meanwhile, organizers reminded us of our covenant and how we were to conduct ourselves. They also reviewed some of the chants and songs that we'd be using throughout the course of the action. This constant grounding in our shared purpose and culture, our covenant and preparing us for next steps has implications for anyone seeking to organize people to do something big for God.

My seat mate on the bus ride to Border Park was a young African-American UMC leader named Charity (pictured with the bird in the back row of our group photo). She and I connected the first night we were there and she was nervous  about what we were about to do. By the time we got on the bus, she was a bit more relaxed due to the training and the fact that she knew she was being watched over by a tribe of United Methodists from across the country and others who made up our Love Knows No Borders community. The organizers prepared us in a multitude of ways--including modeling and reminding us of our why, what and how--each step of the way.

On the bus ride home, I couldn't stop hearing the music/chants from the afternoon. When we were debriefing the day, I wasn't surprised that Charity  mentioned how the music helped. The music on the beach allowed us to be fully present and unafraid in spite of the uncertainty and risk.

What experiences have you had of community like that?