By Kenneth Clark
Special to UMConnection 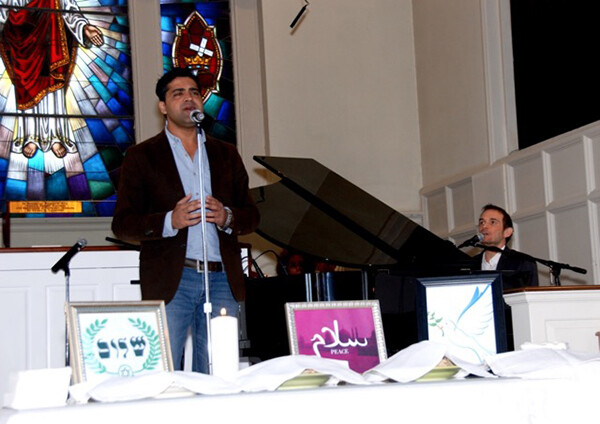 In December, Colesville UMC hosted an unlikely Jewish-American and Palestine-Muslim duo in concert, entitled “In Pursuit of Harmony.” The members of In Pursuit of Harmony are celebrated and Jewish-American songwriter/producer Michael Hunter Ochs and noted Palestinian songwriter/recording artist and Peace Activist Alaa Alshaham, who delivered a powerful message on how previously perceived enemies became friends.

Through their original compositions in song, their frank discussion of their own personal history and videos documenting their meeting and journey together, Ochs and Alshaham discussed their fears and triumphs of crossing political, cultural and religious lines to find a path to peace and friendship with each other.

Their life experiences in traveling between Israel and the West Bank provided lessons of mutual respect and understanding that they now teach in schools, synagogues, churches and concert halls throughout the world.

Their Sunday afternoon concert followed a special worship service, built around the Rev. Michael Armstrong’s sermon, “Pursuing Harmony.” The Rev. Kathy Kohl coordinated with Armstrong to have an inter-faith service, where the entire hymnology and litany for the service spoke to welcoming strangers, spreading peace and sharing the love of God.

In his message, Armstrong encouraged the congregation to “move past the walls we have built up between ourselves and those who are different from us but who are also children of God.”

During the worship, the Communion ritual was altered to a service of “Sharing at the Table of Peace.” Designed to be open for anyone of any faith to partake, rather than grape juice and wine as the elements, clumps of real grapes and pita bread were offered celebrants in a symbolic “sharing of a meal.”

The Table was decorated with words of peace in Arabic and Hebrew, and a dove, a universal symbol of peace.

As a preview to the afternoon concert, Ochs and Alshaham sang two songs in the morning service. They engaged both the choir and congregation in singing of one of their songs. For the afternoon program, the Colesville Bell Choir joined In Pursuit of Harmony in a specially arranged song.

One member of the church stated, “I hope our congregation appreciated how prescient this concert was,” referencing the current tensions surrounding Muslims and others. Many of the church’s members were tearful with joy at the potential of peace that was demonstrated by Ochs and Alshaham.

Among the guests attending the afternoon concert was Dr. Amjad Chaudhry, Leader of the Ahmadiyya Muslim Community of Silver Spring. He joined Armstrong at the end of the concert to provide remarks, including Scripture regarding peace from the Quran.

The afternoon concert was co-sponsored by the Eastern Montgomery County Cluster of Churches that shared in the expenses and planning support. The Revs. Sandy Rector of Oak Chapel and Stacey Cole-Wilson of Good Hope Union UMC were also in attendance. Cole-Wilson provided the opening prayer for the afternoon concert. The overall event was coordinated by Jocelyn Johnson, music director and at Colesville UMC.