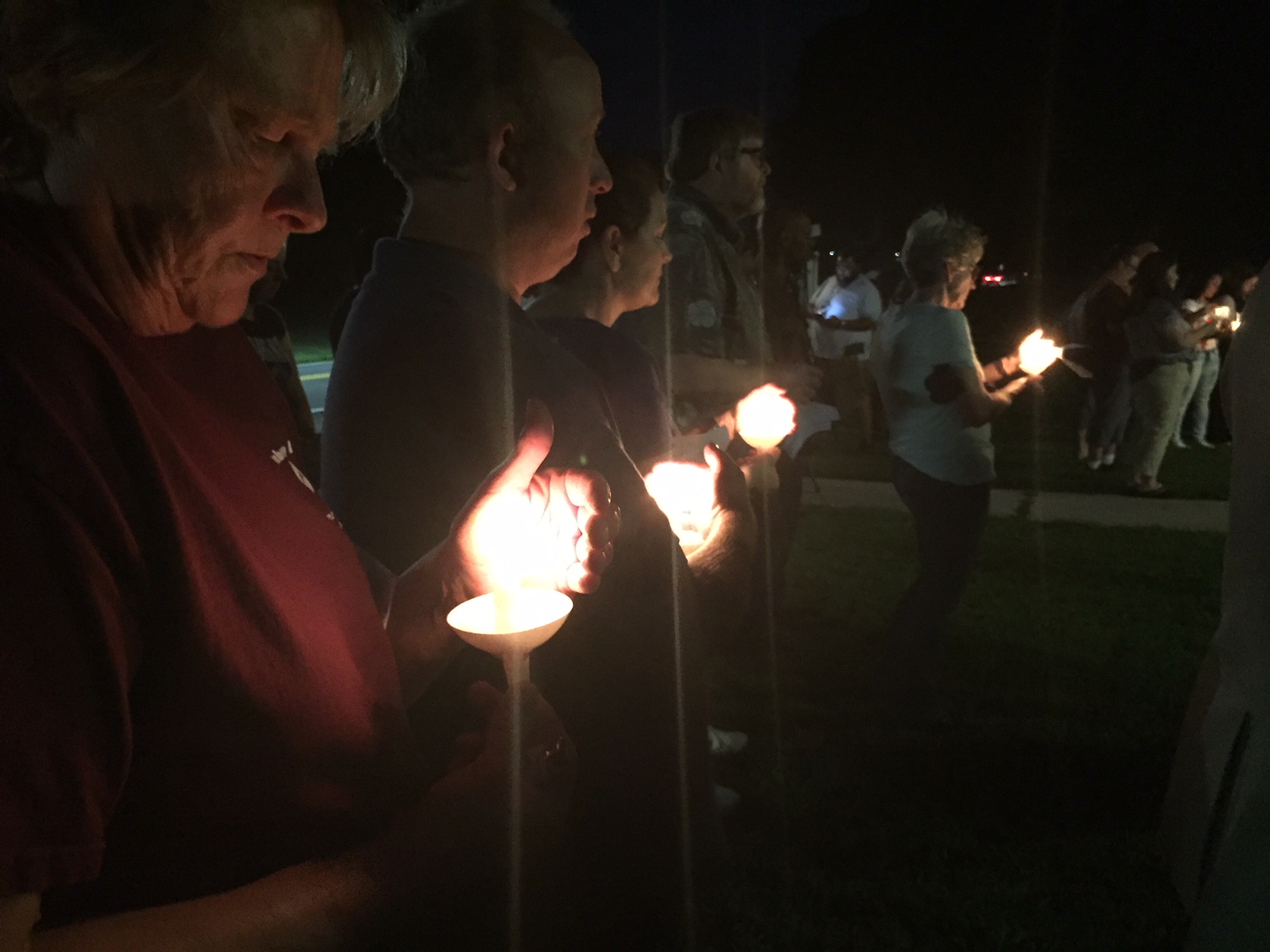 Members of the Perryman community participate in a candle-light prayer vigil at Cranberry UMC Sept. 21 following the mass shooting at the Rite Aid Center one mile away. Photo by Erik Alsgaard.

For the Rev. Tiffany Patterson, it was déjà vu all over again.

She was sitting at a local McDonald’s Sept. 20, she said, when the news came: another mass shooting, this one at the Rite Aid Distribution Center less than a mile from one of the two churches she serves, Cranberry UMC in Perryman.

It was in this same restaurant 11 months ago that she heard the news of another mass shooting, that one at Advanced Granite Solutions in Edgewood. Patterson’s other church, Presbury UMC, is located two miles from there.

In both cases, Patterson reached out to her parishioners first, then the community, but not before others reached out to her. What she learned in responding to two mass shootings in less than a year is something she is sharing with others in hopes that preparation can make for more effective ministry in tragic situations.

Connections and relationships, she said, make all the difference.

“The most powerful thing in this has been the fact that I haven’t had to do any of these past few days alone,” Patterson said four days after the Rite Aid incident. “The outpouring of support from clergy colleagues, from the conference, from the district superintendent, has been really powerful for me.”

After the Edgewood shooting last October, Patterson reached out to a clergy colleague and together, they decided that they had to do something. The result was a prayer vigil the night of the shooting, but it didn’t go quite as smoothly as expected.

They got in touch with the chaplain at Chesapeake Medical Center nearby, “and he was amazing,” Patterson said. “He led us through planning that vigil.”

That prayer vigil, she said, was held at a blocked-off intersection near a gas station near I-95. It was a hectic scene, she said, with media everywhere.

“I learned so much from that,” Patterson said. “In my opinion, it was really hard for that to be a safe space for victims and their families because it was such a media event.”

Patterson made sure to put down boundaries following the Rite Aid shooting. “It was important that we protected families and victims,” she said, “and made it a safe space.”

The vigil at Cranberry, less than a mile from the Rite Aid Distribution Center, was held on Sept. 21 at 7 p.m., on the front lawn of the church. Media were cordoned off for the duration of the vigil, allowing Patterson to focus on being the pastor she needed to be in that situation.

“Media were able to do their job,” she said, “but the sole reason for that event was not that it was a media event.”

Dealing with the media — both times — was something new, Patterson said.

“I had never dealt with media in ministry before,” she said. “You maybe have a piece in the paper if you have a church anniversary, but something like this where you’re not looking for media attention for yourself… and they are looking for stories, and if you don’t quite think through those boundaries, it can be a frenzy.”

Another learning for Patterson was that, when any tragedy happens, people want to respond. There’s often an urgency around that need to help and often, no sense of what to do.

“What a colleague reminded me of last week,” she said, “was that we were doing everything that we could do. You can’t do everything; you are trying your best, and that is what matters. Have grace on yourself and know that what you give is enough.”

Patterson said she has felt the strong presence of God in both incidents.

“People, throughout the whole (Thursday) and the next day, and the whole reached out to me and said, ‘How can I help?’ I learned that I need to just receive that and that I don’t have to carry any of this alone,” she said.

But perhaps the biggest learning, Patterson said, is the power of connections, especially the church with its community.

“If you’re not connected within your community,” Patterson said, “as a pastor or a church, then you have a really hard time doing something like (a prayer vigil). We realized, as clergy in our community, that we are not connected enough. The more you have those connections prior to a tragedy, the better you can respond.”

And it’s not just United Methodist clergy, she said; it goes for ecumenical connections, too, because not everyone involved with a mass shooting is Christian, Patterson said. Thus, at the Sept. 21 prayer vigil, for example, an Imam and a Rabbi offered prayers. Business, community and law enforcement connections are important, too, she added.

“Working together to provide care and support,” Patterson said, “is a powerful thing.”

Note: Erik Alsgaard, the reporter of this story, is trained in crisis media relations and helped respond to the Rite Aid shooting with Rev. Patterson. You can contact him at .