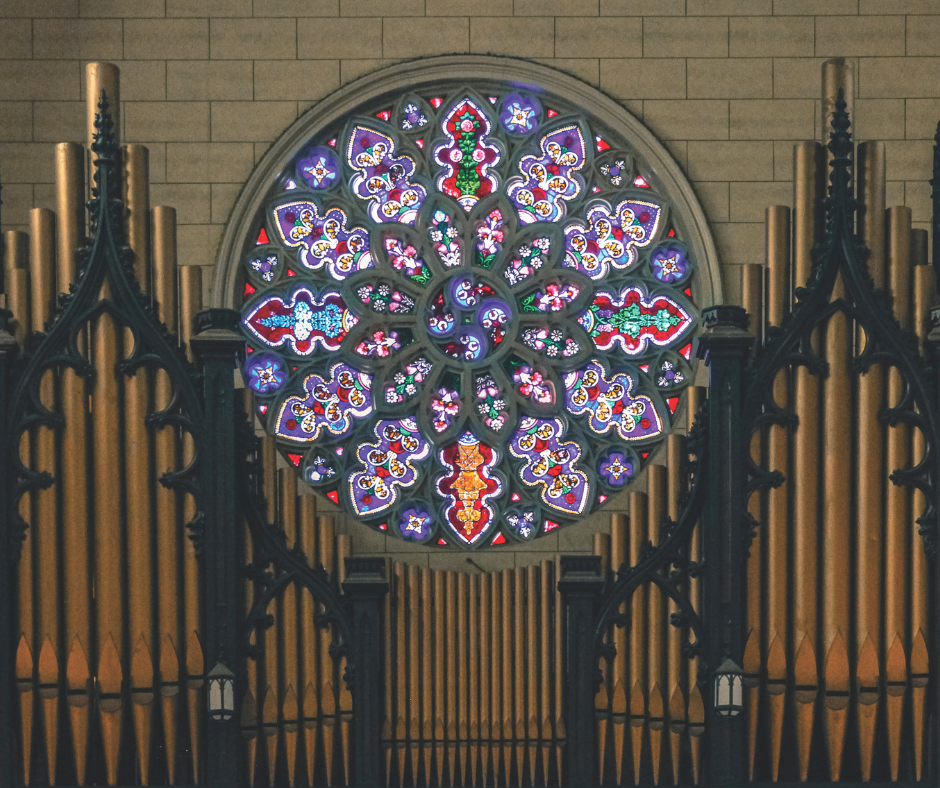 The stained-glass window at Mount Vernon Place UMC in Baltimore is one of its classic Gothic features. Photo by Alison Burdett.

For 147 years, Mt. Vernon Place UMC has defined Baltimore’s landscape. One of the city’s three Gothic buildings, it soars with grandeur, even as it anchors a Charles-Street square defined by culture and history. But this year, the church voted to abandon the glory of the building to resurrect hope for the congregation.

At a Church Conference on Jan. 20, in a vote of 20 to 1, the members voted to give the building to the Baltimore-Washington Conference, which will oversee its upkeep and sell it, hopefully to a missionally-minded organization that will serve the community. In the interim, the congregation will rent back space, either in the church parlor or in the adjoining Asbury House, an historic Italianate Renaissance home attached to the church.

Released from being suffocated by the tremendous financial burden of the buildings, they will begin to redefine themselves as a new faith community. It’s an unprecedented leap of faith, filled with grief, fear, remembrance, relief and possibility for both the conference and congregation.

Superintendent of the Baltimore Metropolitan District in 2017, the Rev. Wanda Duckett has been focusing on bringing new life in new ways to the city. “This is a resurrection project,” she said about Mt. Vernon Place UMC. Duckett believes that in this challenging time for the church, our future is wedded to the ability to seize unique opportunities like this to be creative and entrepreneurial.

“We’ve named that this is the grain of wheat that needs to fall to the ground. This (the attachment to the building) is what needs to die; this is where God is moving,” she said.

Duckett describes this as an organ transplant. Removing the heart of the church — the congregation — from the ailing church building may be necessary to save the body. The courageous question that Duckett asks is, “What can we let go of so that we can work on this new thing?”.

A dwindling city congregation struggling with costs of maintaining a massive building is not a new thing. But Mt. Vernon Place had reached what Beth Gotjen, the Church Council chair, calls “a breaking point.”

A crumbling area of the ceiling makes it potentially unsafe to be in the sanctuary, which seats 900 people. Monthly operations for the buildings total about $8,000 for the church and $1,000 for the Asbury House, and the 30-active member congregation owes more than $20,000 in debt. Other debts, like unpaid rent from a day-care center, also trouble the congregation.

“This is not a situation we can pray our way out of,” said Geof Hart, the church treasurer. In the past, “the congregation would have been offered two options: disband and give up the building, or stay together knowing we have the responsibility of the building.”

But the Board of Trustees of the Baltimore-Washington Conference, at Duckett’s urging, saw a path that might open new frontiers for faith communities in the city. The congregation could transfer their property to the Conference, which would assume all the liabilities and sell it. Net proceeds would be split evenly between the congregation and ministries of the Baltimore Metropolitan District. Along the way, efforts would be made to creatively engage with the buyer of the building to try to find space for the congregation in the new setting.

“It is different. This is unique. This is a first-time-ever opportunity,” Hart said.  “We are in a new day and age.”

“Removing the overwhelming weight of carrying the building on our back will free us to be able to dream again and actively think about and engage in ministry in the community — ministry that’s vitally needed,” said Mt. Vernon Place member Jerome Paylor. 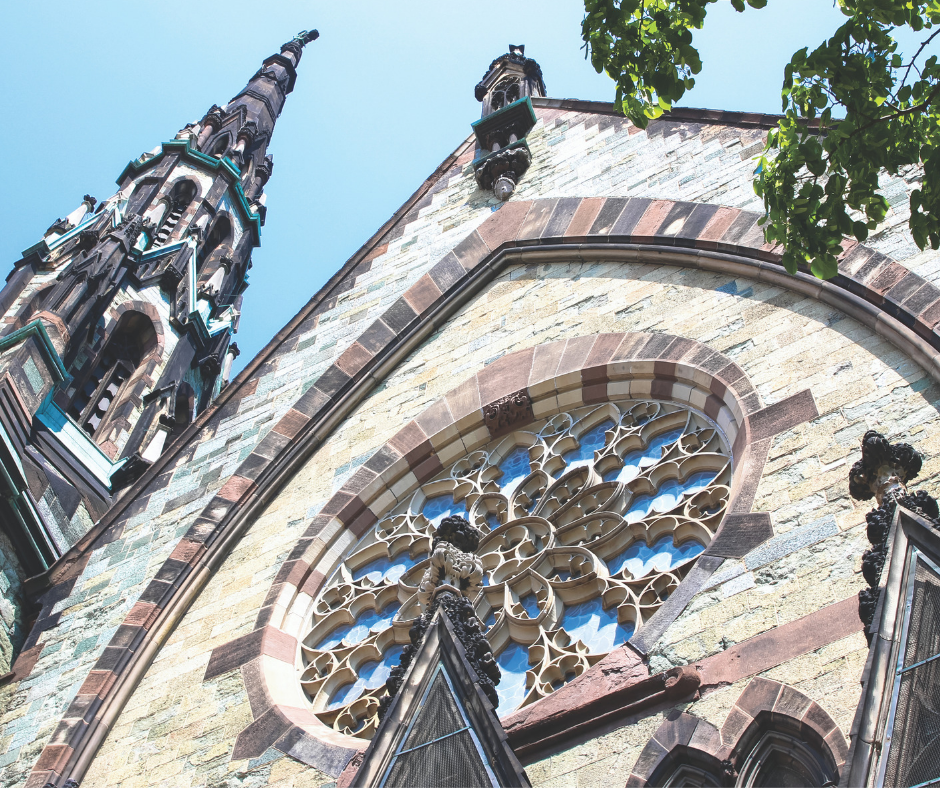 But parting with the sanctuary is not easy. Conceived of as a “cathedral of Methodism,” the building is a literal treasure, noted by the American Institute of Architects as “the most significant building in the city of Baltimore.” It is also a national historic landmark, sitting on the site of the former mansion of Charles Howard, in which Francis Scott Key, the writer of “The Star Spangled Banner,” died. It houses the burial plate of Francis Asbury, Methodism’s first bishop, and a pulpit that Asbury once preached from. The American walnut pews, hand-carved by one man, and the stained-glass rose window, are two of the most noted features in a church designed to point worshippers to God’s glory and grandeur.

But it is not just the tangible details that make the church hard to give up. History has it that during World Wars I and II, thousands of soldiers found a home away from home sleeping and eating at the church and joining in dances held on Saturday evenings. In more recent years, the church opened its doors for more than a decade each Saturday night to feed the homeless and hungry in the community at Carpenter’s Kitchen.

Dal and Eleanor Bunker said they fell in love in the 1950s at the church’s Sunday Evening Club. The year they were married, there were 17 other weddings with brides and grooms from the club. They all raised their children at the church. Jack Mitchell, who is now in his 90s, served as treasurer of the church and as a trustee for 40 years. He did it as a labor of honor and love, because his mother and father raised him at Mt. Vernon Place.

The trio were present at the church conference and admit that watching the church’s decline has broken their hearts. But they now see hope — even if it’s guarded hope — in the future.

John Strawbridge, the president of the Conference Trustees, is a member of Lovely Lane UMC, just up the road from Mt. Vernon Place. At the church conference, he shared how in recent years he noted that Mt. Vernon Place was struggling and felt that spiritual imagination might be an important part in addressing this situation.

A few months later, in 2018, he found himself leading the Trustees and in a position to make a difference. Strawbridge, Duckett, and many others are beginning to see this as “a Holy Spirit moment.”

The Rev. Rod Miller, who is serving as pastor of the congregation in this season of transition, agrees.

“We’ll have to work together in new ways,” he said. “It can’t be business as usual. This is a very special group of people, as diverse as any I’ve seen. We’re broken and a little wounded. But there is a certain strength in that.”

The buildings are for sale by Praise Buildings, a religious property brokerage. There has been some interest expressed in them, so far mostly by non-religious organizations looking for a spectacular and unusual space.

But Miller and the congregation now feel free to truly be a community of faith — a catalyst — creating a new way of being the body of Christ. “Can you feel the Spirit moving,” he asked. “I can, I really can.”