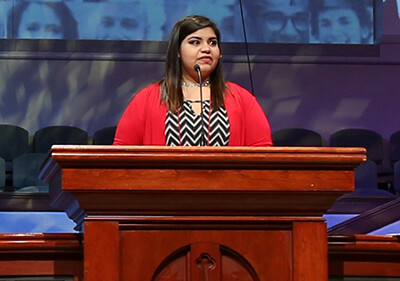 At Salem Hispanic UMC in east Baltimore, Pastor Cassandra “Cassy” Nuñez dreams out loud. Her dreams aren’t bound by the sanctuary. They spill out into the neighborhood where she spends most of her waking hours pastoring to anyone in need of God’s love.

In the streets, schools, medical clinics and a dozen other places she finds people who aren’t churched and who have a variety of experiences with organized religion. She dreams for them and alongside them anyway.

“We don’t have to talk about God,” she said. “God’s face is reflected in theirs.”

Salem UMC has gone through many changes over the generations, serving the variety of immigrants who have moved through the community. Today, the church sits amid a large Latino community and Salem has been transformed into Salem Hispanic.

About 35 people gather to worship on Sunday morning. Nuñez preaches a sermon in English at 9:30 and one in Spanish at 11 a.m. However, the worship often becomes bilingual as she translates to make sure everyone is included.

For Nuñez, worship is important, but even more important is what happens when people gather after the services and try to communicate with one another. “That’s where God is,” she said. “That’s where the Holy Spirit is moving.”

Nuñez was appointed, as a local pastor, to Salem Hispanic UMC last July. She was very cautious about offering solutions on how to address a loss in membership. “That would be unreal,” she said. “It would also not allow the Spirit to do the work.”

So now, she spends most of her time outside of the church and she listens – learning what’s important to people. “The Hispanic/Latino community here keeps telling me how different it is that I’m helping them out without an agenda, without forcing an agenda, or forcing Methodism on them. I’m just making friendships. When people trust in friendships, they’ll trust what you have to say.” 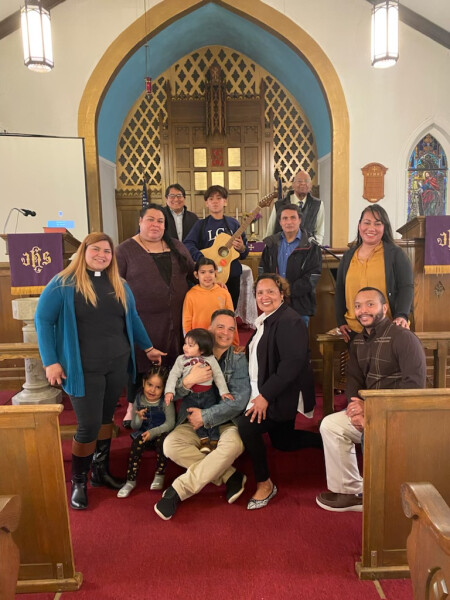 But she does invite people to church – a lot – and more importantly, she is authentically herself. “Hopefully, I’m allowing them to see that being a Christian doesn’t mean you have to give up any part of you that makes you you, in order to come to Christ,” she said.

One day, a group of women, who had a more traditional or conservative understanding of a pastors, were meeting at the church and had music on. They were surprised and delighted to learn that la pastora dances. “I grew up listening to that music, but they seemed surprised at how normal I am,” Nuñez said.

Part of her success in the community comes from the fact that she shares their culture, their desire to keep beloved traditions alive, and their common thirst to be in proximity and to be belong.

Born in Northern Mexico, she and her family migrated to the United States when she was 9. They settled in Texas and she lived there for 20 years, becoming a DACA recipient.

DACA, or Deferred Action for Childhood Arrivals, is a policy that protects about 800,000 young people who entered the US unlawfully as children. The program doesn’t grant them official legal status, but it does allow them to apply for social security numbers and have stability pursing higher education and jobs.

Nuñez calls herself a “DACAmented pastor.” She has a “foot in both places” – with the documented and undocumented communities and marches and actively advocates for justice and the rights of all people.

During the previous presidential administration, which threatened to revoke the DACA policy, she “knew fear,” especially when she thought about her two children, who are 18-months and four-years-old.

Nuñez’s family is a “ministry family,” she said. Her husband is also a local licensed pastor in the UMC, although he’s currently supporting Pastor Nuñez at Salem. “Our lives revolve around ministry,” she said.

For now, she wouldn’t have it any other way. She thinks back to the adage of “if, one day, your church burned to the ground, would the people in the neighborhood notice, would their lives be affected?”

Salem is creating itself to be a presence, a force, for the community as they continuously explore ideas of what it means to be the body of Christ in the world, Nuñez said.

“I have had experiences that demonstrated that while I am preaching the Gospel in word and action, God is right in the midst of it. I feel like Salem is becoming that experience for me,” Nuñez said. “God is opening space. God is parting seas.”

It is such a delight to have met Cassy and to read of what she is doing and who she is being!

How can we help? How can you help us, another congregation, still searching for focus, in a different setting of urban life?

Pastor Núñez is a bright light and up-and-coming leader in the conference. She is also a student at Wesley Theological Seminary.

Hi Pastor Nunez,
Praying for success in your ministry in Highland Town. Please say "Hi" to our friend Alfredo. We worked with him in the JFON Clinic and would like to help if there is going to be a clinic again.
Grace and Peace, Jack and Louise

Those of us at Wesley Theological Seminary are really pleased that Cassy is both an adept pastor and a full-time Master of Divinity degree candidate through the Student Pastor Program.

Those of us at Boston University School of Theology that coordinate the Raices Latinas Leadership Institute- from where Cassy graduated, are very proud of the courage, creativity, and wisdom demonstrated through this ministry!!! Adelante Cassy!!