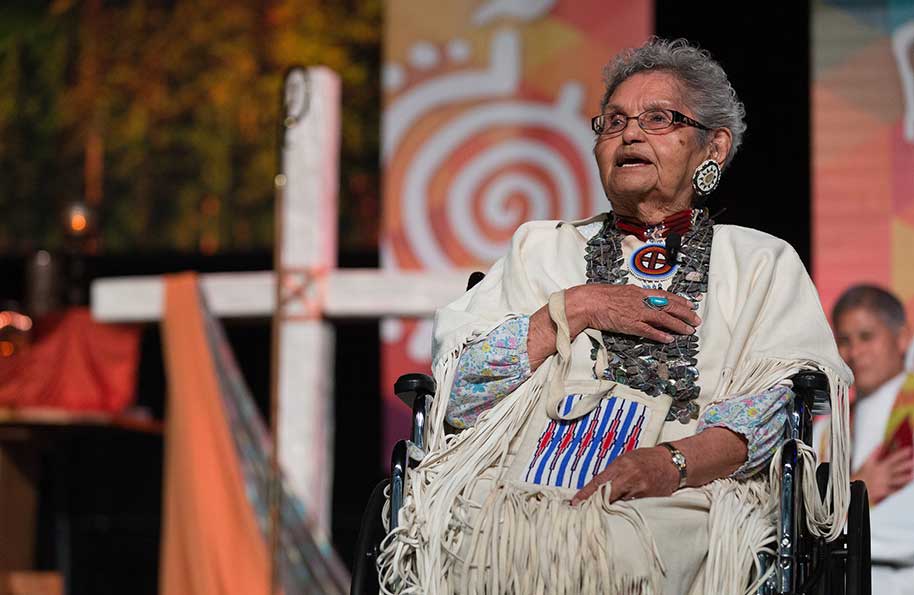 When you think about General Conference too long, almost everything can become a metaphor.

There’s a spider painted into the tile floor of the women’s bathroom at the Portland Convention Center. People nudge it with their toes. Some discretely stomp on it. One woman, a self-professed sufferer of arachnophobia, kept her foot over it, afraid the spider might somehow be “really real.” She knew she wasn’t being rational, but her fear took away her faith in what she knew to be true.

Sometimes, you can catch a glimpse of that fear-even-in-the-face-of-faith here as General Conference begins. People believe so deeply and hope so hard that when topics like “Rule 44” – to take away debate and Robert’s Rules and replace them with holy conferencing – were proposed their hearts fluttered with concern. When banners proclaiming “Love Prevails,” and speaking of “Queer Communion” were raised, the battle lines between very nice people became more definitive.

And beneath it all were whispers that the 2016 General Conference will cost $10.5 million – so every second should count for something.

During opening worship, Bishop Warner Brown, a native of Baltimore, spoke about the hope and skepticism that was also present in the lives of disciples after Jesus’s resurrection. They, too, lived amid an odd mixture of joy and apprehension.

Brown encouraged those present to live into the aspirations of the first United Methodists, claiming that even though the history of the church is often told in our differences, we are yoked in the love of God and of God’s people.

He quoted the Shona hymn, “Jesu, tawa pano,” Jesus we are here for you, he said. If being there for Christ becomes our sole agenda, it just might unite a people in unexpected ways.

“However we choose to go into the future,” said Brown, “may it be consistent with the call God has put on our hearts.”

But to do that, said Erin Hawkins, the General Secretary of the Commission on Religion and Race, you “have to hold your neighbor’s story with the same honor you hold your own.”

For many of the 864 delegates and the almost 2,000 visitors who surround them in the Convention Center, including myself – honoring “the other” will not always be an easy task. But then, I remember, as the woman said, the spider isn’t real...

To begin the General Conference, Kathryn Jones Harrison, a nonagenarian former chairwomen of the Grand Ronde Tribal Council, urged everyone who listened to the native drum beats to place their hands on the hearts and listen. God’s ancient rhythms speak today, she said.

These heartbeats that bind us each together as God’s creation are a great metaphor – they’re an even better reality.