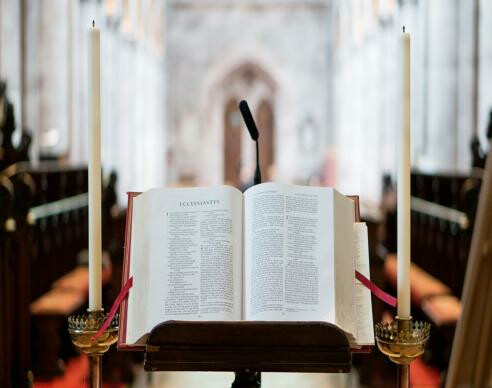 United Methodist clergy should hold tight, for now, after a U.S. federal judge struck down the law that gives clergy tax-free housing allowances.

That’s the advice of the Rev. Nate Berneking, an attorney and the director of financial and administrative ministries in the Missouri Conference.

“Come April 15, 2018, your 2017 taxes will almost certainly be just as they’ve always been,” Berneking wrote in his “Housing Allowance Case FAQ.”

“We would offer a word of caution to pastors and churches thinking of switching from a parsonage to a housing allowance. Given the uncertainty, it might be a good idea to wait for some clarity.”

Under a 1954 federal law, a “minister of the gospel” doesn’t pay income taxes on compensation designated as housing allowance. The Internal Revenue Service has traditionally interpreted “minister” broadly to encompass rabbis, imams and other religious leaders.

The Freedom from Religion Foundation, based in Madison, Wisconsin, sued the IRS and argued that the law discriminates against secular employees.

U.S. District Judge Barbara Crabb on Oct. 6 largely sided with the foundation, ruling the law violates the First Amendment’s prohibition that “Congress shall make no law respecting an establishment of religion.”

She made the decision because the law “does not have a secular purpose or effect and because a reasonable observer would view the statute as an endorsement of religion,” she wrote in Gaylor v. Mnuchin.

The ruling does not deal with parsonages, which have been tax-free since the United States enacted income tax in 1913.

Nevertheless, the stakes of the case could be large for The United Methodist Church. As of 2013, 20,783 United Methodist churches — about 64 percent of the denomination's churches in the United States — paid some amount of housing allowance to clergy, according to General Council on Finance and Administration data.

“It would be extremely difficult for some of our pastors and maybe even more difficult for our retirees,” Berneking told United Methodist News Service. He discusses clergy housing in his book on church leadership.

Without the tax break, both active and retired pastors would need to pay thousands of dollars more to the IRS. That’s on top of the self-employment tax active clergy already pay. Many congregations set their compensation for pastors with the tax policy in mind.

Steve Lambert, general counsel for General Council and Finance and Administration's legal department, has written a white paper analyzing the case. His office is monitoring the briefs, appeals rulings in the case.

It's still too soon to say what the impact of this ruling will be.

For one thing, Crabb has not yet ruled on what remedy the foundation should receive in the case. The judge has ordered both sides to write legal briefs arguing what remedies they think are appropriate. Those briefs will not be fully complete until Nov. 8, with Crabb announcing her decision sometime after that.

Whatever her decision, it will likely face appeal.

Crabb previously struck down the housing-allowance tax break as unconstitutional in 2013. However, the 7th U.S. Circuit Court of Appeals overturned her earlier ruling.

The appellate court panel did not rule on the merits in the case. Instead, the panel ruled that the co-presidents of the Freedom from Religion Foundation did not have standing to sue because they had never tried to claim the exemption on their housing allowance.

Since the earlier case, the IRS has denied the co-presidents’ request for the exemption.

However, Berneking said the co-presidents could still face questions of standing on appeal since they never tried to qualify themselves as “ministers of the gospel.”

“There is a chance they could get the exemption,” he said. “In which case, they don’t have a lawsuit.”

The Church Alliance, which includes the denomination’s Wespath Benefits and Investments, is among the groups advocating for clergy to keep the exemption. Barbara Boigegrain, the top executive of Wespath, is also the chair of the Church Alliance — a coalition of the chief executive officers of 37 religiously affiliated benefit programs.

“The Church Alliance believes that this tax exemption for clergy housing allowances is a constitutionally permitted accommodation when reviewing in context with the parsonage exclusion for in-kind housing provided to clergy, and in light of code provisions that exclude employer-provided housing from employees’ incomes in secular circumstances,” Boigegrain said.

Still, Berneking cautioned that this is a complex issue and Crabb raises valid concerns. In her ruling, Crabb quotes the 1954 law’s sponsor, the late Rep. Peter F. Mack Jr., who made explicitly religious arguments for the exemption at a time Americans feared the rise of “godless” communism.

The General Council on Finance and Administration's legal department is monitoring the case. If you have any questions, you can email the department at  .