Late afternoon May 18, the delegates voted by 428 to 405 to accept the recommendation of the Council of Bishops to delay a debate on homosexuality at this gathering of the denomination’s top legislative assembly and let a proposed commission study church regulations.

» Read the entire text of the Council of Bishops’ statement

The bishops asked for the body’s permission to name a special commission that would completely examine and possibly recommend revisions of every paragraph in the Book of Discipline related to human sexuality. The commission would represent the different regions of a denomination on four continents as well as the varied perspectives of the church.

The Book of Discipline is the denomination’s governing document.

“We accept our role as spiritual leaders to lead The United Methodist Church in a ‘pause for prayer’ — to step back from attempts at legislative solutions and to intentionally seek God’s will for the future,” said Council of Bishops president Bishop Bruce Ough in announcing the recommendation. 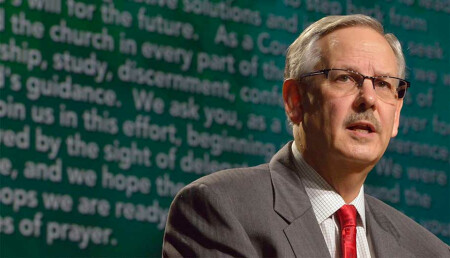 Bishop Bruce R. Ough reads a statement about sexuality and the church from the denomination’s Council of Bishops on May 18 at the 2016 United Methodist General Conference in Portland, Ore. Photo by Paul Jeffrey, UMNS.

The bishops also suggested they might call a special General Conference in 2018 or 2019 to deal with such proposals, Ough said. He also leads the Dakotas-Minnesota Episcopal Area.

Other bishops stood behind Ough as he read the statement.

The United Methodist Church’s sexuality debate has seemed to be reaching a breaking point, especially as more countries including the United States have legalized same-sex marriage. Many U.S. United Methodists have publicly officiated at same-sex weddings in defiance of the Book of Discipline’s ban.

As General Conference got , more than 100 clergy and clergy candidates in the U.S. and one in the Philippines came out as gay. The denomination bans the ordination of “self-avowed gay clergy.”

At the time, African bishops made clear they were encouraging delegates not to budge on church teachings, which define marriage as between a man and woman. Since 1972, the Book of Discipline has asserted all people are of sacred worth but the church considers the practice of homosexuality “incompatible with Christian teaching.”

Talk of possible schism has been in the hallways, and legislation is on the table that would allow congregations to disaffiliate from the denomination with their property. That legislation has been pushed by United Methodists who support the current church teachings on homosexuality.

“We share with you a deep commitment to the unity of the church in Christ our Lord,” Ough told the multinational assembly.

“Within the church, we are called to work and pray for more Christ-like unity with each other rather than separation from one another. This is the prayer of Jesus in John 17:21-23.”

The bishops presented this recommendation near the beginning of a plenary when General Conference delegates expected to take up possible changes to the Book of Discipline regarding ministry with LGBTQ individuals. The initials stand for lesbian, gay, bisexual, transgender, and queer or questioning.

Ough said the bishops continue to hear from many people “that our current Discipline contains language which is contradictory, unnecessarily hurtful, and inadequate for the variety of local, regional and global contexts.”

The bishops asked delegates and other United Methodists at the multinational gathering to spend the allotted debate time in prayer and confession.

After a time of discussion and prayer, delegates returned to the parliamentary ups and downs that have typified this General Conference.

The Rev. Adam Hamilton, a delegate from the Great Plains Conference, moved that General Conference support the bishop’s creation of a commission and a special General Conference to deal with sexuality issues. Hamilton called the bishops’ ideas “our best chance of finding a long-term solution.”

A substitute motion by the Rev. Chappell Temple, Texas Conference, supported the creation of the commission but called for General Conference to go forward with voting on sexuality petitions. To postpone, he said, would cause “more confusion.”

The delegates voted against the substitute. Hamilton’s motion was still before the delegates when they broke for lunch.

But after lunch, delegates voted down Hamilton’s motion by 438-393.

Two delegates also accused the afternoon’s presiding officer, Nashville (Tennessee) Area Bishop William McAlilly, of bias and incompetence in how he was overseeing the afternoon debate.

The Rev. Gregory Gross, a delegate from the Northern Illinois Conference, accused McAlilly of trying to telegraph votes by shaking one finger or two as he addressed the delegates.

After Hamilton’s motion failed, Jen Ihlo — a delegate from the Baltimore-Washington Conference — tearfully asked that McAlilly step down. Both Gross and Ihlo are advocates for changing church rules to be more inclusive of LGBTQ individuals.

McAlilly called for a 10-minute recess to confer with colleagues after plea.

During the break, Ihlo told United Methodist News Service that the bishop “totally confused the body on the votes,” and she shared Gross’s concerns.

However, McAlilly called the accusations “the craziest thing I ever heard.”

“I was holding a pen part of the time and trying to write notes,” he told UMNS. “That’s the most absurd thing I’ve ever heard, frankly.”

After the recess, the committee that chooses presiding officers announced it was standing by McAlilly.

George Howard, a delegate from the West Ohio Conference, made a motion that delegates accept the bishops’ recommendations. It was Howard’s motion the delegates affirmed.

After his allotted period for presiding concluded, McAlilly cried and was comforted by various delegates.

The afternoon signaled how much anxiety, grief  distrust surrounds this longtime dispute among United Methodists.

“Our church is struggling, and there are voices all around the edges — just a variety of voices,” Howard told UMNS. “What I’m afraid of is that if we don’t pause and allow the Spirit to fill the space, then we will fracture.”

Like many in the room, Howard believed he had secured such a pause.

The Rev. L. Fitzgerald “Gere” Reist II, secretary of the General Conference, said he needed to confer with the gathering’s Committee on Calendar and Agenda before he could say for sure that sexuality legislation was off the table this General Conference.

The  Council of Bishops made its report after General Conference delegates made a nonbinding request that bishops offer a path forward out of the “painful condition” the church in this long-simmering debate over sexuality.

Bishops usually complain that they resemble “potted plants” during General Conference sessions. As a body, they usually sit silently on the dais during plenary sessions unless it is one of their turns to preside.

“As far as we can discover, this is the first time that a General Conference has ever made such a request of the Council of Bishops, and we have accepted this request with humility,” Ough told the gathering.

Council was not unanimous

The bishops’ statement did not receive the unanimous vote of the council’s members, Ough acknowledged. But the support was overwhelming, he said.

He added that unanimity is not required for unity.

Greater Northwest Area Bishop Grant Hagiya, whose area is hosting this General Conference, served on the bishops’ writing team. He said more traditional bishops are worried about a “time out” for discernment that could include a moratorium on church trials.

“I think they’re worried that it will open the door for all kinds of violations,” he said.

“I think that if we force this body to deal with those legislative issues, it’s going to hurtful and harmful, just as it was in the past. I think we’re trying to find a new way, a creative way.”

The bishops do not have a vote at General Conference. They do have the authority to call for a special session of the General Conference, a possibility last considered to address the worldwide economic crisis of 2008. The bishops in 2009 ultimately opted not to call a that time.

It is unclear how complaints against clergy will move if they are accused of violating the Book of Discipline’s prohibitions related to homosexuality.

The bishops’ statement said: “We will continue to explore options to help the church live in grace with one another — including ways to avoid further complaints, trials harm while we uphold the Discipline.”

However, advocates for greater inclusion of LGBTQ the life of the  saw the bishops’ recommendations as a sign of hope.

“I count this decision as a victory for the LGBTQ cause, though our division is not yet reconciled,” said the Rev. Frank Schaefer, whose church trial for officiating at his son’s same-sex wedding made international headlines. Schaefer’s clergy credentials were removed and then on appeal restored.

“I hope that our bishops will take their mandate very seriously and will be able to lead us toward reconciliation and unity,” Schaefer’s statement continued.

The Rev. Rob Renfroe, president of the unofficial evangelical caucus Good News, released a statement saying the commission had the potential to resolve differences but also is “fraught with peril.”

He said the bishops must make sure to include “well-known and respected leaders of the traditionalist and orthodox renewal movement” on the commission.

Renfroe also said his group is concerned that the bishops could use the commission and possible special General Conference as an excuse not to enforce the Book of Discipline.

The Judicial Council, the denomination’s equivalent of the U.S. Supreme Court, may offer some clarity on the question when it comes to gay ordination.

General Conference delegates, by 490 to 308, voted to refer to the denomination’s top court a question of whether General Conference or annual conferences have the main authority to set ordination standards. The Rev. Jeremy Troxler of the Western North Carolina Conference made the motion to refer.

Ahead of General Conference, the Baltimore-Washington, New York and Pacific Northwest conferences’ boards of ordained ministry announced that they would not consider sexual orientation in determining a clergy candidate’s fitness for ordination.

Bishops already had scheduled a meeting May 21, the day after General Conference, to deal with any fallout from the meeting.

Hahn and Hodges are news reporters for United Methodist News Service. Kathy L. Gilbert contributed to this story. Contact them at (615) 742-5470 or  .