For many, last year’s vandalism at Glenelg High School was a headline about racist graffiti that sparked thoughts of hate and intolerance and faded with the next week’s news. But for the Rev. Gayle Annis-Forder and Linden Linthicum UMC, those events are still shaping lives — for the good — and leading to new, courageous conversations about faith and forgiveness.

On May 23, 2018, at around 11:30 p.m., Tyler Curtiss and three other teens were caught on video surveillance, wearing masks and hoods, as they spray painted symbols and racial epithets in several locations at the Howard County high school. Prosecutors of the crime said the vandalism was discovered three hours before an awards ceremony for graduating seniors. 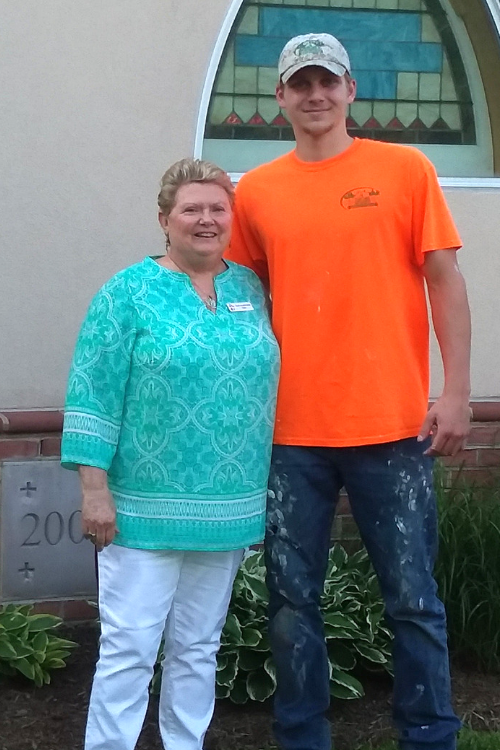 Annis-Forder, the pastor at Linden Linthicum UMC in Clarksville, was initially as “horrified as everyone else” when she read about what was being considered by some to be a hate crime and by others to be a disgusting senior prank.

But when she read Curtiss’ open letter to the community on Facebook, she paused.

In the statement, Curtiss wrote about defacing his school with racist and profane graffiti, and how dishonoring his principal, David Burton, made him ashamed of himself.

“All of the students and faculty, especially minority members of the school and staff, were forced to see hateful and disgusting images and words on the walls of their school. No words of apology could ever make up for that, but I am truly sorry and humiliated,” he wrote. “Yesterday, I spent all day wondering how in one impulsive and stupid moment, I could have put myself in a situation where I would disgrace myself and my family, ruin relationships that I have built over the past 18 years, and generally ruin my life.”

Annis-Forder admits that the first response that came to her mind was, “you got caught, that’s why you’re feeling remorseful.” But then she started to think about the things she professes about forgiveness and repentance. She told herself, “take a deep breath here.”

She also found herself responding to “that nudge that you’re supposed to do something about something,” she said.

“If somebody says they want to be better, well, isn’t that what we’re all about as Christians?” said Annis-Forder.

She then invited her congregation into a conversation. She reached out to a church member who knew the Curtiss family, and then to Tyler Curtiss and his mother. She also reached out to the school principal.

Curtiss responded and the two met. The church offered to help provide him with opportunities to perform community service hours and he eagerly took them up on the work.

But he also wanted to attend church and so Annis-Forder and the congregation made sure he was welcomed.

Over time, AnnisForder connected him with people he could learn from and serve with, including Rabbi Amy Scheinerman, the Revs. Andrea King and Cynthia Belt, two African-American United Methodist pastors who had him work with their Toys for Tots program, and with Bruce Kopp, of Salem UMC in Hebbville, who chairs the Night of Peace Shelter board.

“I have been a pastor for 35 years and have had numerous opportunities to walk with people who have done terrible things, up to and including murder,” AnnisForder said. “Tyler is unique in my experience. He is not blaming anyone else or dodging responsibility for what he did. He is willing to take on the anger and pain of those who have been hurt by his actions.”

On April 4, Curtiss was sentenced to eight weekends and one day in jail. He was taken out of the courtroom in shackles. On his first weekend in the Howard County Detention Center, he turned 19. Annis-Forder and Rabbi Scheinerman visited him his first weekend and gave him “homework,” advising him to listen and learn some things about others and their experiences and stories.

His absence at church, while he serves his time, has been noted. Curtiss joined Linden Linthicum UMC on March 31.

“I’d never seen anyone so excited about joining church. Curtiss had never been a church member, so he’s learning about faith,” said Annis-Forder.

Kopp shared with the young man the importance of the Bible, which he pointed out was full of stories of people who had done bad things and found new futures with God. The Bible study groups at LindenLinthicum bought Curtiss his own Bible.

When he didn’t know where to begin to read, Annis-Forder recommended the resurrection story, which he read on Easter Sunday in the detention center.

Because he was working to help, in part, pay his parents back for legal expenses, Curtiss missed the closing ceremony of Howard County’s Courageous Conversation Circles.

He was one of 11 people from the church participating in these discussions on race, culture and faith and bias. He was a participant, Annis-Forder said. He was also the subject of conversation in several of the circles and deemed by some as “hopeless.”

Over the past year, AnnisForder said, Curtiss has grown from “being willing to put himself in uncomfortable and challenging situations in order to forge new relationships with communities and people previously unknown to him. … He does not hide his own sin, but lets it be a catalyst for change, not only for himself, but anyone who will listen to what he will share about what he has learned.”

At Linden-Linthicum, people are certain that repentance means more than regret and apology. It’s about committing to make a change.

Welcoming and working with Curtiss has opened up conversations about forgiveness and what it means to be community for one another.

For Annis-Forder, it’s also meant delving into the question of, after one has sinned and made amends, is there a time when that atonement is complete? How long is the redemption road?

In his initial Facebook statement, Curtiss addressed this topic.

“I realize that my actions have caused wounds that will take much time to heal — if they ever do,” he wrote. “I only ask that you keep an open mind as I attempt to redeem myself by my actions as I go forward. I promise that in the future, you will see a different man, a better man, and I hope that one day those actions will lead to forgiveness.”

For Annis-Forder, the journey with Curtiss over the past year has been “life-giving and wonderful for me, and for Tyler, I think,” she said. “This is what we are, what the church is supposed to be doing. It’s a good example of listening to whatever your nudge is, and then doing it.”

Wonderful story for all the world to see. Congratulations Tyler on a life to be proud of. We all err but most don’t work so hard to repent

Pastor Gayle is a kind and loving person. The Christian way should be to forgive those who have made mistakes - if someone has learned from their mistake they should be forgiven. Tyler has so much to offer and his life should not be blemished forever - he is moving in the right direction to change his internal being. Thank you Pastor Gayle for reaching out!

I am a firm believer in redemption. It is what being a true Christian is. So glad Tyler has embraced church and this chance to become one of God's disciples. Keep up the good work! Your church will always be your family - standing behind, beside and when needed in front of you.


If his first request for forgiveness was authentic, he is forgiven. Now that he is making amends is a step in healing for others and himself. Proud of all involved for leading him through this process.

This is such an inspiring story of growth. It is very refreshing to read about someone who is willing to take full responsibility for their mistakes and make meaningful contributions to the community and turn their path around. Well done Tyler!