As part of the virtual Laity Session on Nov. 14, members of the Baltimore-Washington Conference spent significant time in learning about tools for engaging in anti-racism work and conversations. Led by Fear+Less Dialogues, a grassroots organization that is committed to creating spaces for people to engage in hard, heartfelt conversations that see gifts in others, hear value in stories, and work for change and positive transformation in self and others. Rev. Gregory C. Ellison is founder and principal of Fear+Less Dialogues.

Participants started the training with a blank piece of paper and marking it into quadrants. Then, after writing four roles with which they most identify, one in each quadrant, they were asked to rip the paper into four pieces, one piece for each role. People then listed their four roles in the chat function on Zoom.

Mother, wife, father, organizer, friend, believer, pastor, daughter, servant – those were just some of the roles that popped up.

Charles Peterson, with Fear+Less Dialogue, asked people to take their most important role, whatever it was, and lift it up to the screen. After a moment, he said, “take the piece of paper, crumple it up, and throw it away.” 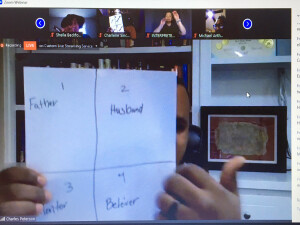 Peterson repeated that with each of the four roles and pieces of paper. Judging by the comments in the chat – pain, sorrow, confusion, grief -- people were not happy doing this.

This “experiment,” Ellison said, “is designed to rebuild, reframe, and re-evaluate these roles” in light of the pandemic. “In order to make the shift to something new, we must first call them (the roles) into question.”

This is not easy work, Peterson said. “But now ask yourself,” he said, “after all the roles are gone, what is left?”

“What is left,” Peterson said, “is the essence of who we are. It remains.” The Rev. Sheila Beckford next presented strategies for the hard work and conversations on anti-racism. Anti-racism, she said, is anything that “interrupts, dislodges, and dismantles racism.” The first strategy, she said, is recognizing and working towards equity, not equality.

“Equality, in itself, is a good word,” Beckford said. “The Bible teaches us that we are all created equally by God and that God loves all of us equally. Equality is something we should strive for.”

However, equality can also be a bad word.

“When inequality is already present,” she said, “equality simply perpetuates inequality. What is needed to get to equality from inequality is not equality, but equity.”

Anti-racism requires equity, she said, because it provides a path to address both past and present inequality and helps make up the differences inherent in inequality.

The second strategy she talked about was de-centering whiteness. That is, Beckford said, moving away from the wrong notion that whiteness is supreme, or more superior, than anything else.

“The values of White supremacy center and prioritize whiteness,” she said, “and the ideas and voices of White people are central.” Thus, she said, “you can’t use the tools of racism to fight racism.”

“Stop relying on White people to determine which strategies, methods, and timelines are the best,” Beckford said. At times, in doing these workshops, Beckford said, people leave without making a clear connection between what has been done and what people will do. One connection that stands out, she said, is between your core truth – what came out in the first “experiment” – and anti-racism.

“We understand that we can do anti-racism work at any time,” she said, “and in all aspects of our lives.” She invited people to examine their core truth and ask how it “nuances” what they will do with anti-racism work.

“This is soul work,” said the Rev. Stacey Cole Wilson, BWC’s Executive Minister of Justice and Service. “This is the work of being salt and light.”

Cole Wilson announced that intentional, six-month “journeys” will begin in January 2021, where 20 cohorts and between six and ten people each will gather for virtual conversations on anti-racism. Churches will also start having these conversations, she said. More information on these opportunities will be announced soon.

When will we hear a denunciation of the attacks on the elderly and defenseless attending a Trump rally on Saturday evening after dark? Or does this just go one way?