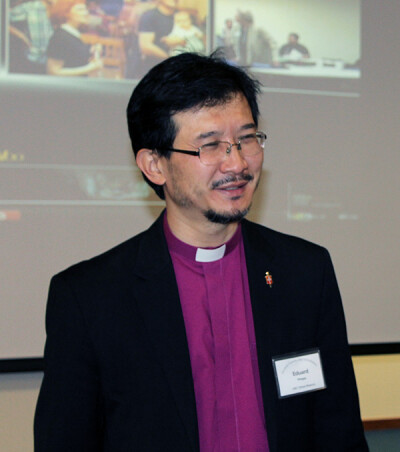 Singing “Amazing Grace” in both English and Russian set the stage for a two-day gathering May 5-6, at the BWC Mission Center, for the Eurasia - Central Asia: In Mission Together Consultation.

Bringing greetings and leading opening worship in impeccable English was Bishop Eduard Khegay of the Eurasia-Central Asia Episcopal Area, based in Moscow. He told of his growing up years in , followed by the Moscow United Methodist Theological Seminary, the Candler School of Theology (MDiv) and a DMin from Wesley Seminary. He an Elder in 2001.

As God called Abraham to go “to the land I will show you,” Bishop Khegay followed his call into ministry, leaving the stability of home to serve in the unknown, as Abraham had. “When God calls, … you want to know that you’ll be safe,” he said, but it’s unknown. “All you have is that God calls you to go.”

Some of us in Central Asia want stability, he said, after 25 years of political unrest. “Maybe that is why Putin is so popular,” he said. “He’s stabilizing in a time that’s been very up and down.”

When God called Abraham, he didn’t give stability but he gave a blessing, Bishop Khegay continued. “You are a blessing for us in Eurasia and we want to be a blessing … to go to those places the United Methodist Church, Christ, has not yet been.”

During the second day of the consultation, Dr. Mark Elliott spoke on “Orthodox History, Theology and (Sadly) Politics,” where politics is inextricably linked to the Russian Orthodox Church, which claims all people of the Russian nation as its own. This puts the United Methodist missions there in the category of “proselytizing,” Elliott said.

Bishop LaTrelle Easterling greeted the assembly in late morning the second day. “We so much appreciated the effort she made to come from the Council of Bishops’ meeting to welcome everyone,” said the Rev. Charles Harrell, a retired BWC Elder, who has led several mission trips to Russia. 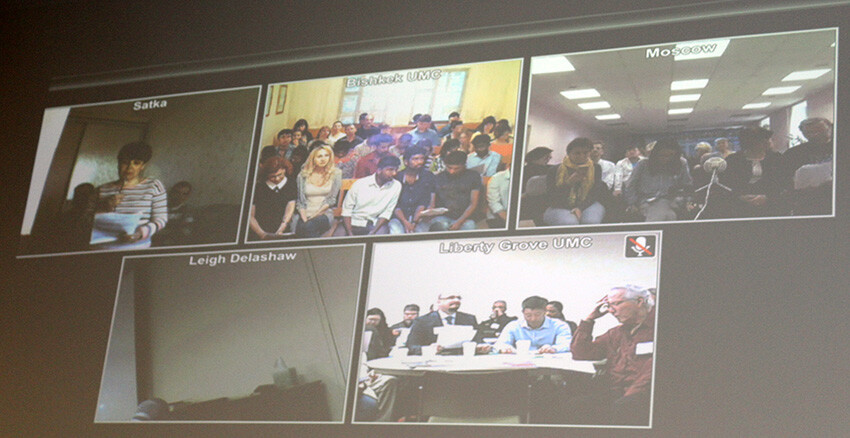 Participants in the room both days were joined via computer by enthusiastic members of five Central Asian churches (Bishkek, Kyrgyzstan; Moscow, Russia; and an interview with Tanya in Satka, Russia), who gave testimonies in response to the bishop’s remarks on answering God’s call. On the second day, the participants were from Kamyanitsa, Ukraine, and Pushkin, Russia, a church in Russia’s northwest near St. Petersburg.

Tanya joined her church in 2001, but the Satka church started in 1958 in someone’s home. There are now 20 members, whose community outreach includes small groups with children and youth, nursing and retirement homes, she said. Now the congregation hopes to build a larger church and expand their ministry to nearby towns.

As the group gathered following a break, they sang “Come and Join Us,” a Cossack song, with words and music written by the Rev. Irina Mitina, district superintendent of the South District. The song evoked the clop-clop-clop of riding on horseback with John Wesley, the hoofbeats clearly heard. She led the three-piece praise band and music throughout the conference. That evening, a Russian folk group, “Moscow Nights,” performed wearing traditional garb and playing Russian instruments.

As an example of mission “within Eurasia,” Mitina told of working with the Roma people, many of whom are illiterate. They held a camp for Roma at Voronezh, and she went out to the streets to recruit. Starting with ten, the group grew to 35 people eager to learn of Christ.

There are many streams of in Eurasia, Bishop Khegay said, and sometimes they’re mixed up. “As we learned about Methodism, we’ve found this is our home.” Almost like giving an annual report, he outlined the focus and programs of the church in Eurasia:

A presentation Saturday highlighted the five core values of the “50/50 Covenant: In Mission Together” that is the basis of the partnership between The United Methodist Church and the Russian churches. These values include church planting, spiritual formation, community development, communication self-sufficiency.

Bishop Khegay closed the consultation with a Communion service. Consultations are held every 18 months to two years with no set place or date. For information for how your church might be involved, contact the chair of the conference’s Eurasia committee, Rob Pierson, pastor at Emmanuel UMC in Cumberland, or the Rev. Charles Harrell, retired.

The Rev. Charles Harrell contributed to this story.