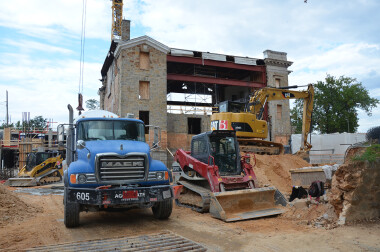 To say that Emory Fellowship, a United Methodist congregation on the Georgia Ave. corridor in Washington, D.C., is undergoing change would be an understatement.

After years of dreaming and casting of vision, and after at least seven tries at getting started, the church, through its 501(c)3, the Emory Beacon of Light, Inc. (EBOL), is in the middle of a $55.5 million renovation that will create affordable housing units, homeless units, and more.

Created in 1996, EBOL is the mission arm of the church, said the Rev. Joe Daniels, pastor at Emory Fellowship. The historic church, which has roots in Washington going back to 1832, has found a dramatic way to make a difference in their neighborhood and beyond.

The non-profit, which has its own board of directors, partners with several area service agencies to bring hope and healing to people in D.C. That outreach, when the renovation is done, will be greatly expanded.

“With the issues we had in the community at that time, including housing, drug addiction and alcoholism, …in order for us to help people become whole, we needed to have an entity that could access greater funding to address these huge needs,” Daniels said about the creation of EBOL.

The issues are still present, Daniels said. To address them the Beacon Center, scheduled to open late next year, will have 99 units, 91 of which are designated as affordable housing (60 percent of Area Median Income), with eight units of permanent supportive housing for the homeless; 30,848 square feet of multipurpose facility and office space (church and EBOL); 9,469 square feet of recreation and community program space; a business center, fitness center, bicycle parking, resident lounge, outdoor courtyard area, resident and community programs, and 87 precious parking spaces.

“We will start the leasing process and marketing for tenants in the next six months,” said Hazel Broadnax, a member of the church who is the president of the non-profit Emory Beacon of Light. She has overseen the renovation for the past 10 years, she said, “from the start.”

A one-bedroom unit, Broadnax said, is going for $1,057 per month. “You can’t get anything in this city for that,” she said.

Of the $55.5 million for the construction project, Broadnax said, almost $10 million is to renovate the church and church office space. That money, she said, is coming from two sources: a loan from the United Methodist Development Fund, and a leasing agreement between the church and EBOL. Roughly $45 million is being used for the residential program, with about $20 million coming from the District of Columbia’s Housing Production Trust Fund, and the remaining coming from the Four Percent Low-income Housing Tax credits, a program of the Federal Government.

Broadnax, who volunteers at EBOL, is a CPA with experience at both the city and federal levels, said she is used to working with big numbers. At one point, she said, she was the controller for Human Services in D.C., with a budget of $1.4 billion.

“Maybe if I didn’t have the background that I have, I would have been afraid to do some of these deals we’ve had to do,” Broadnax said. “There were times when we were looking for, like, $2 million to close gaps, and I said, ‘This is nothing; we can do this.’”

Throughout construction, Daniels said the book of Nehemiah, chapters one through six (restoring Jerusalem’s walls), has accompanied him on the journey. In addition, John 10:10 and John 5:1-9 have been foundational Scriptures for him.

“We need to be concerned and we need to be caring, compassionate fighters for justice for people who live on the margins,” Daniels said.

One piece of the problem, Daniels said, is that people who serve in the infrastructure of the city – teachers, police officers, hotel workers – can’t afford to live in the city.

“The housing we’re providing is not only helping people moving from homelessness to residency,” he said, “it is also helping people who are the working poor.”

Three principles, Daniels said, have helped the congregation: patience, persistence, and prayer. “Those three things have held us together and gotten us through,” he said. “But the good news is, the best is yet to come.”