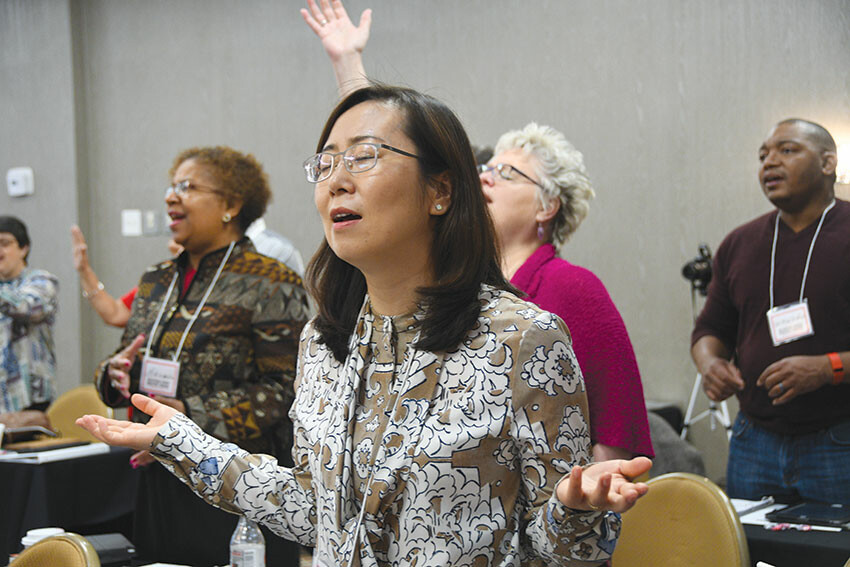 Pastor EunJoung Joo, of Washington Grove UMC, worships at the Multiethnic Church Conference in Oklahoma City March 30. Surrounding her are the Revs. Brenda Lewis, Laura Easto George Winkfield. The two-day conference focused on becoming diversity-oriented so that the church can reflect the many faces of God.

To really be the church God intends, United Methodists “need to get comfortable with being uncomfortable,” said Pastor Ramon Jackson of Inspire D.C. in Washington, D.C.

Diversity is more than just a good idea; it’s a God-given vision.

Jackson was one of seven members of the Baltimore-Washington Conference who traveled last month to a Path One Multiethnic Church Conference in Oklahoma City to learn how to do just that as they explored how “differences matter” and what it means for a church to reflect the many faces of God.

Their participation was underwritten by the BWC’s Office of Vibrant Communities, which is committed to creating vital local churches that reflect the fullness of God.

The purpose of the gathering, said the Rev. Elaine Robinson, a professor of Methodist studies at Oklahoma City University, was to live out “the mystery of our Gracious God, which lies in our ability to enter into right and radical relationship with the vast irreducible whole of God’s creation.”

But homogeneous churches are nothing new, Robinson said. In one of the first Christian churches in Corinth, which was a bubbling cauldron of diversity, the apostle Paul scolded the people — Jews, Greeks, Romans, freed and slaves — for their division and lack of unity in Christ.

“When you isolate a people-group for the sake of Christ, they become less effective,” said Brian Leander of Adelphi University, plenary speaker for the Conference.

A researcher on intercultural competencies and their impact on churches and businesses, Leander has found that there is one thing multiethnic, multicultural, multiracial and multifaith groups have in common: they are “diversity oriented.”

Rather than focusing on trying to attract certain quotas of groups of people, Leander encourages churches to become diversity-oriented churches. Cultural, economic, social and religious diversity “comes right from the heart of God,” he said. “It is the heart of God that God’s church should be a place of prayer for all people.”

To create this diversity-orientation requires openness, Leander said. “Intimacy is the key to this openness.” Openness also involves:

“Real openness also demands that we stop acting as if tolerance is acceptable in the church,” said the Rev. Laura Easto, superintendent of the Baltimore Suburban District, who attended the Conference.

The Rev. Brenda Lewis, another attendee, recognizes this. She is the first African-American pastor to serve Cokesbury UMC in Abingdon. For Lewis, living amid diversity means intentionally creating relationship. “If the Kingdom of God is not segregated, why on earth is the church?” she and others at the gathering asked.

Moving into true acceptance and reconciliation means recognizing that there are “cultures within cultures and diversity within diversity,” said attendee, the Rev. George Winkfield of Emmarts UMC in Woodlawn. It also means boldly trusting God and taking risks.

Asbury UMC in Washington, D.C., is black church. Recently, it launched The Bridge, a worshipping community led by Pastor Matthew Wilke, who is white, to reach out to the changing community. He also attended the Conference.

“Asbury decided they wanted to become more diverse, more inclusive to the neighborhood, many of whom are white,” Wilke said. “To live into diversity takes time and relationship building. … Everyone in the room needs to humble themselves a bit.”

But Winkfield also offers a note of caution. “The Black Lives Matter movement provides a space for people to have their humanity. They have a right to say what they’re saying. And, the black church is a place where there is safety. You can’t strip away that safety now just because someone perceives it’s not needed anymore.”

Living in this tension between homogeneous congregations and diversity-oriented churches, between servant leaders and transformational leaders, between attractional and missional styles of discipleship, and between creating unity while honoring great differences, will be a challenge.

However, it’s a challenge the church must address, Easto said.

Throughout the two-day conference, leaders from multiethnic churches offered ideas for embracing diversity. They included:

Those moving toward becoming diversity-oriented churches will soon discover what happens when “human resistance meetings divine persistence,” Leander said. “Let us listen. We all have a story of divine persistence living in us.” 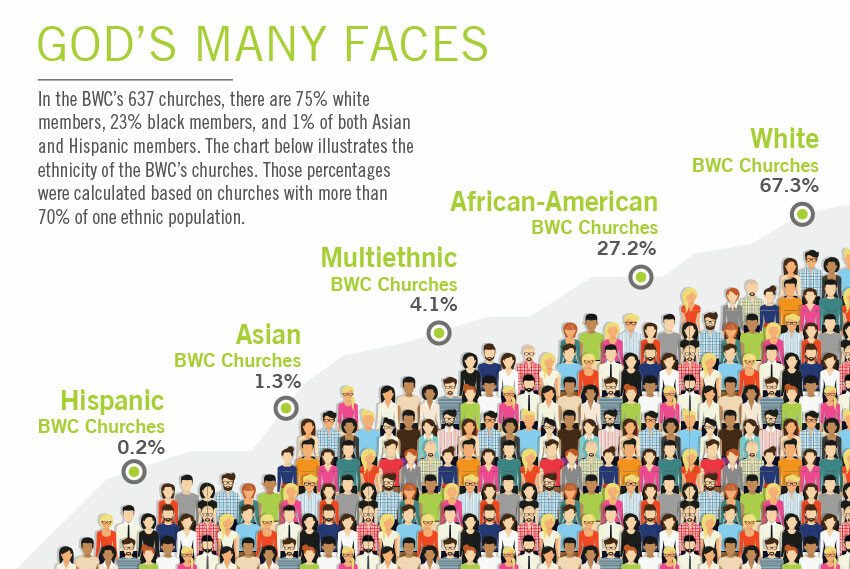