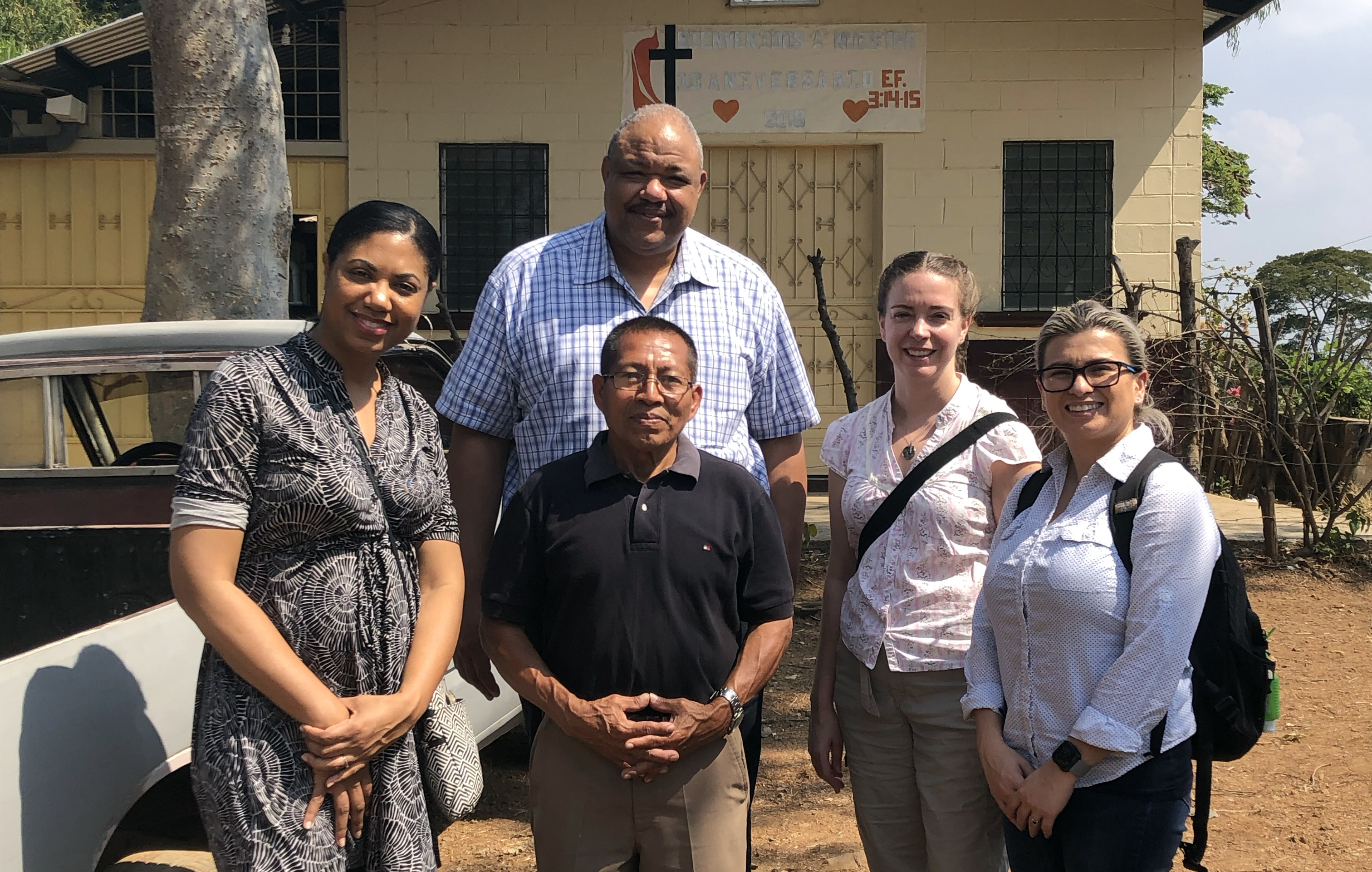 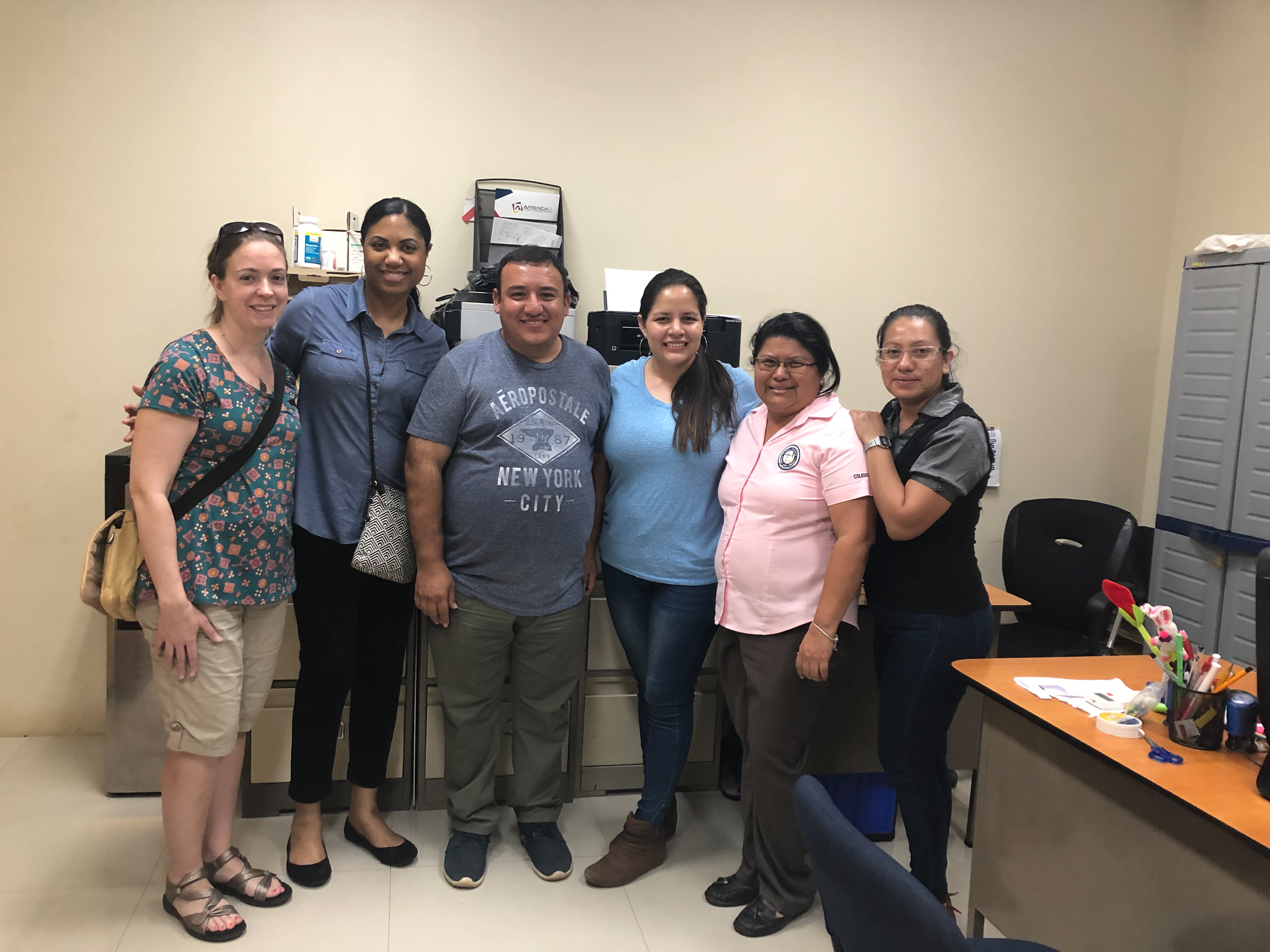 In February, the Baltimore-Washington Conference sent a small exploratory delegation to El Salvador to explore possible partnerships for ministry. The Rev. Heather Olson, pastor of Lisbon UMC and the BWC's chair of  the Education and Advocacy Committee for Hispanic and Latino Ministries, shares her thoughts.

It had been seven years since I had last been to El Salvador and worked with Bishop Juan de Dios Peña. While a lot looks the same from seven years ago, the Iglesia Evangelica Metodista de El Salvador (IEMES) has been busy. 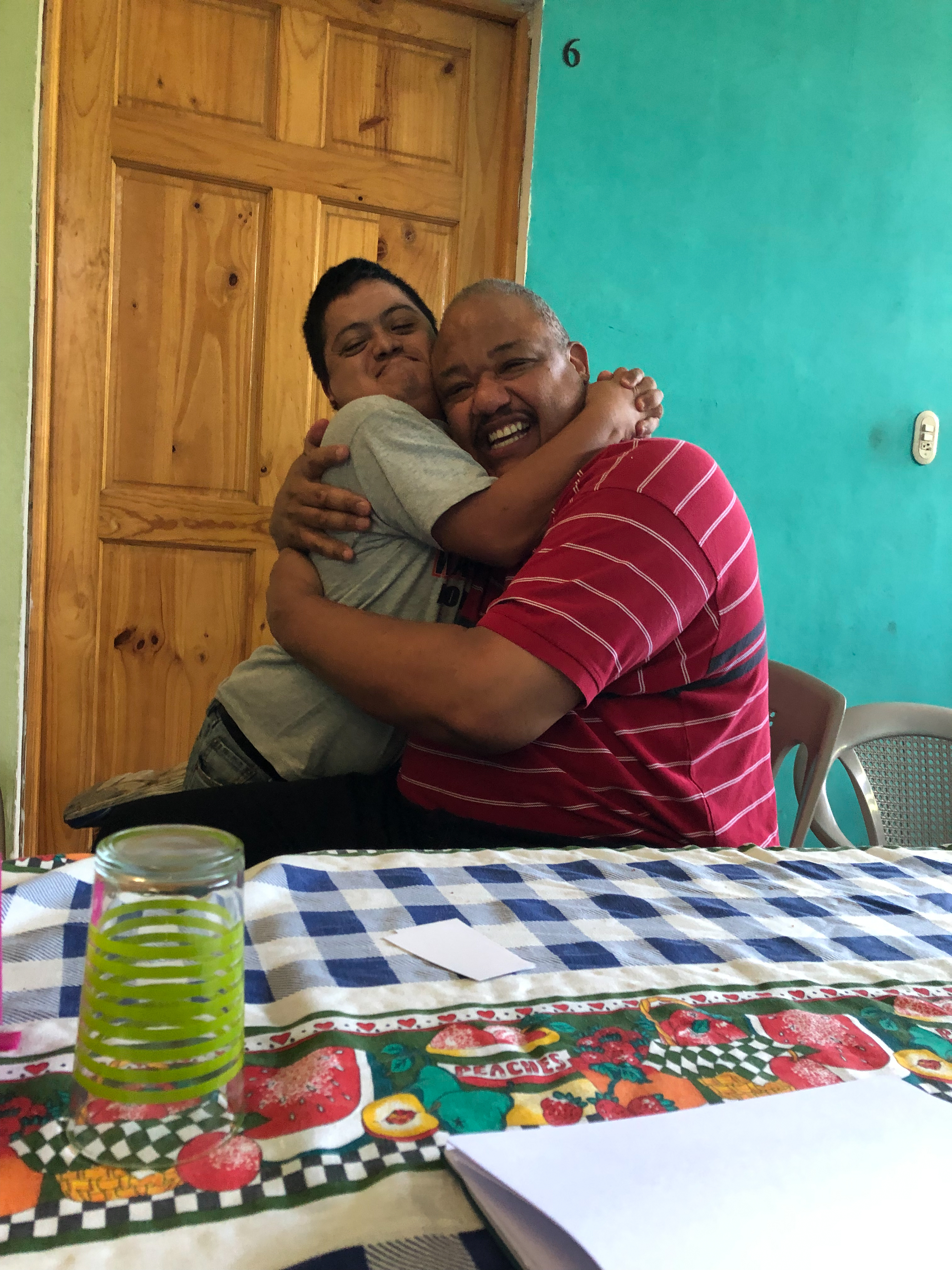 There are health clinics attached to three of the churches, two of them government-run and one owned, run, and funded by the IEMES. These clinics, charging $5 per patient and usually offering medicine for free, have seen more than 300,000 people.

New since my last visit is a mission house, formerly Bishop Peña’s house, renovated in 2014 to sleep 26 adults. Also new is a Methodist school with 420 students from age 4 through grade 9. Even more students applied and were turned away after they reached their enrollment capacity. 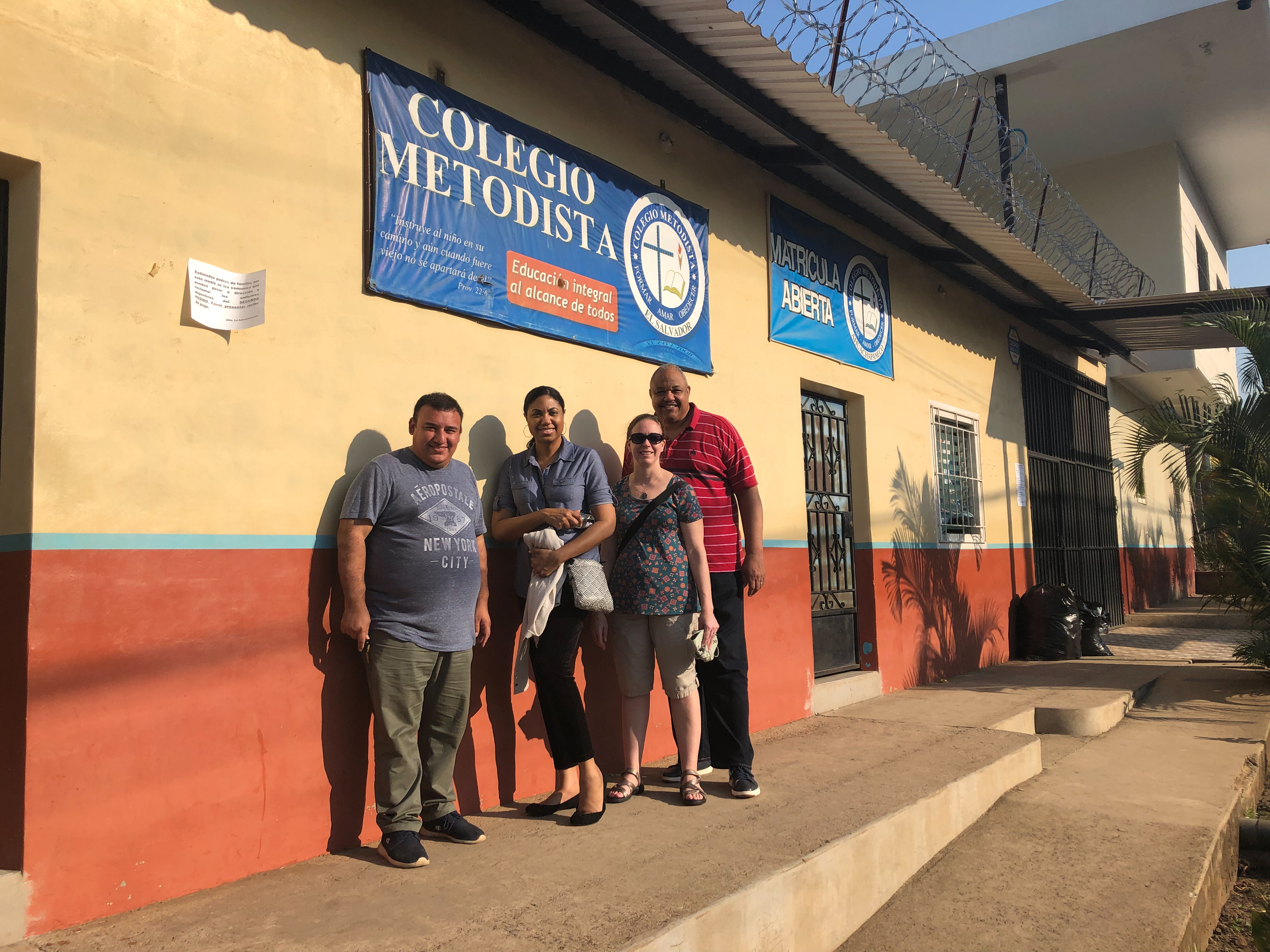 In addition, land is already bought for a high school. The IEMES has one more hurdle to go through before construction can begin: figuring out how to connect the sewage drainage from the school with the city’s sewers two blocks away.

My companions on this trip were the BWC's Hispanic/Latino Ministries Coordinator Emma Escobar (a native Salvadoran), and the Revs. Stacey Cole-Wilson, from the BWC staff and Tim Warner, pastor of Emory Grove UMC and Mill Creek Parish.  Stacey and Tim were on their first visits to Central America.

Two common themes we heard throughout the week were about trouble with gangs and broken families. The Spanish phrase was ‘familia desentegrada’ – literally, disintegrated family. The family problems lie in often having the father in the U.S., working to send money home, the mother taking on one to two jobs herself, and the children then being left unsupervised. 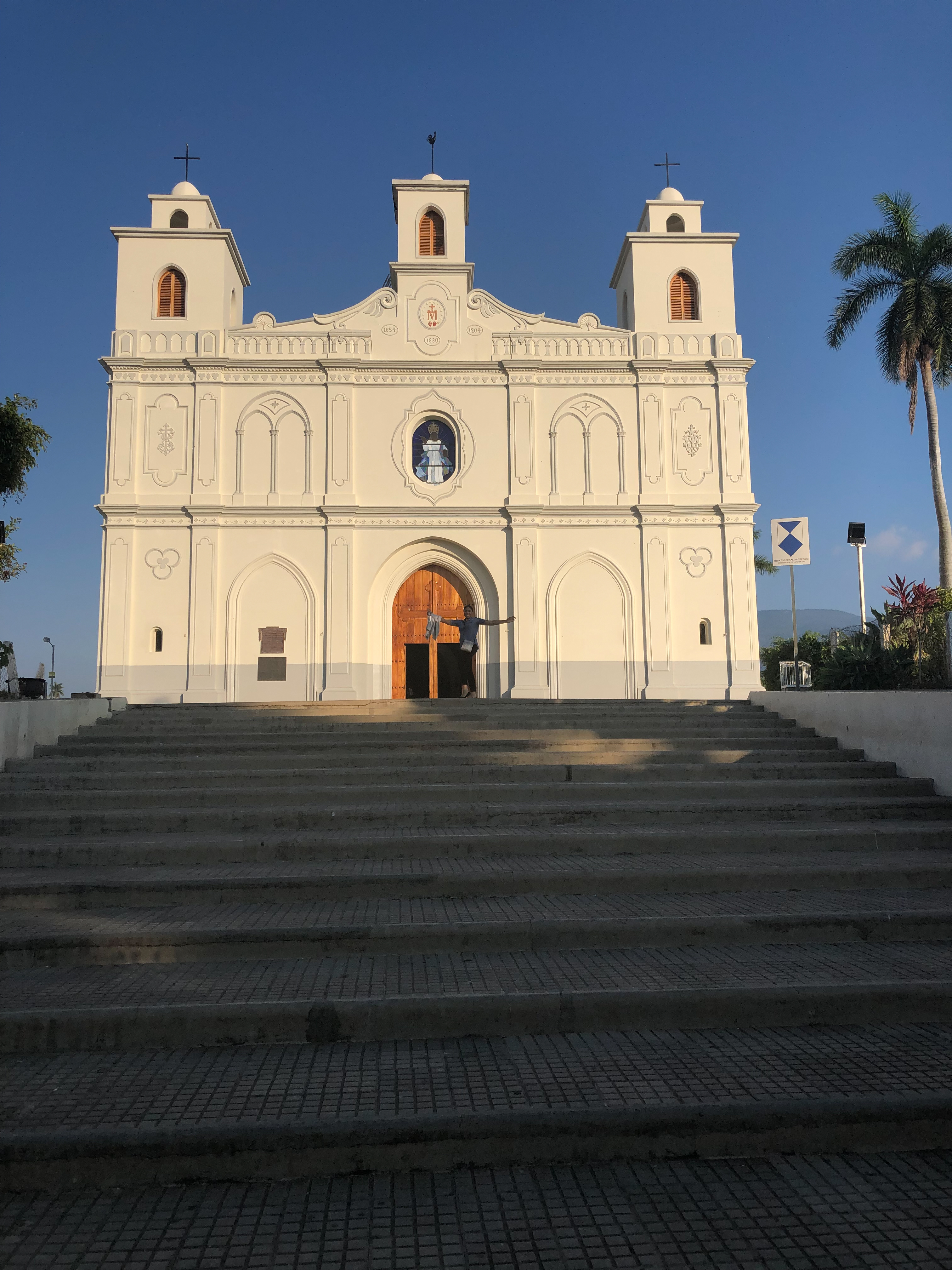 Gangs are a related problem as they target children ages 11-14 and threaten, “Either join us or we’ll kill you.”

This is why there have been so many unaccompanied minors trying to enter the U.S. – they have literally fled for their lives. (For clarification, ‘unaccompanied’ means not with their parents; they are usually with another family member or friend and not solo.)

When the U.S. saw an increase in minors trying to enter our country, IEMES saw a corresponding decrease in the number of children in their churches. Thanks be to God, however, that there is also a correlation between IEMES becoming more involved in a community and gangs becoming less involved in that community. 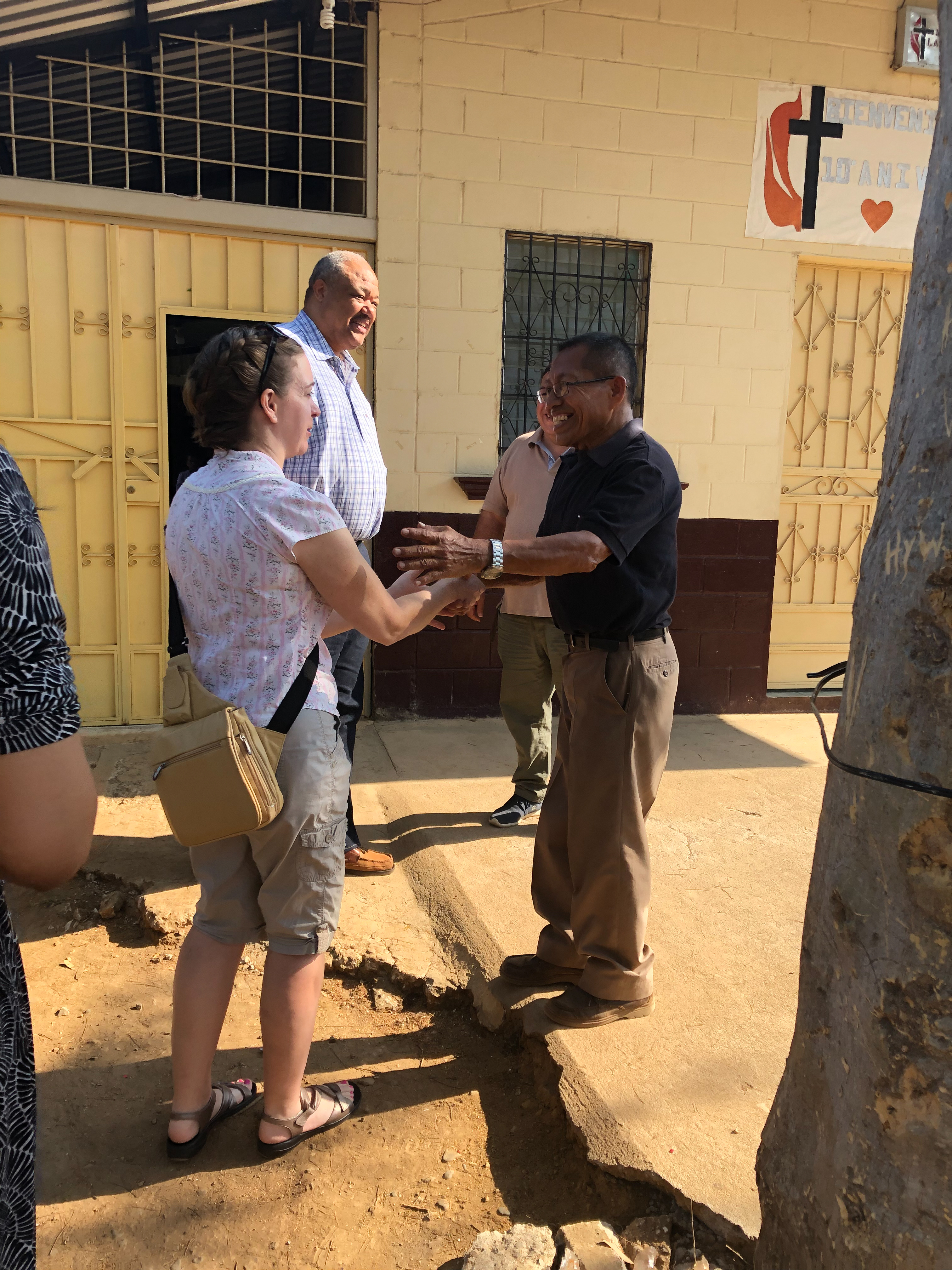 We visited six of the churches while we were there. One church has now become the reference point when giving directions within their community. Another church sends people out into their community to gather the children on Sunday morning for Sunday school.

God gave this pastor a detailed vision and slowly it is coming to pass. They have a beautiful church building, complete with a kitchen, which is empty waiting God to provide the $3,000 for appliances. Once stocked, Pastor Gloria has a vision for training women in baking, one of her God-given talents, so that the women can be empowered economically and at the same time, care for their families.

Bishop Peña also took us to two churches near the Guatemala border. 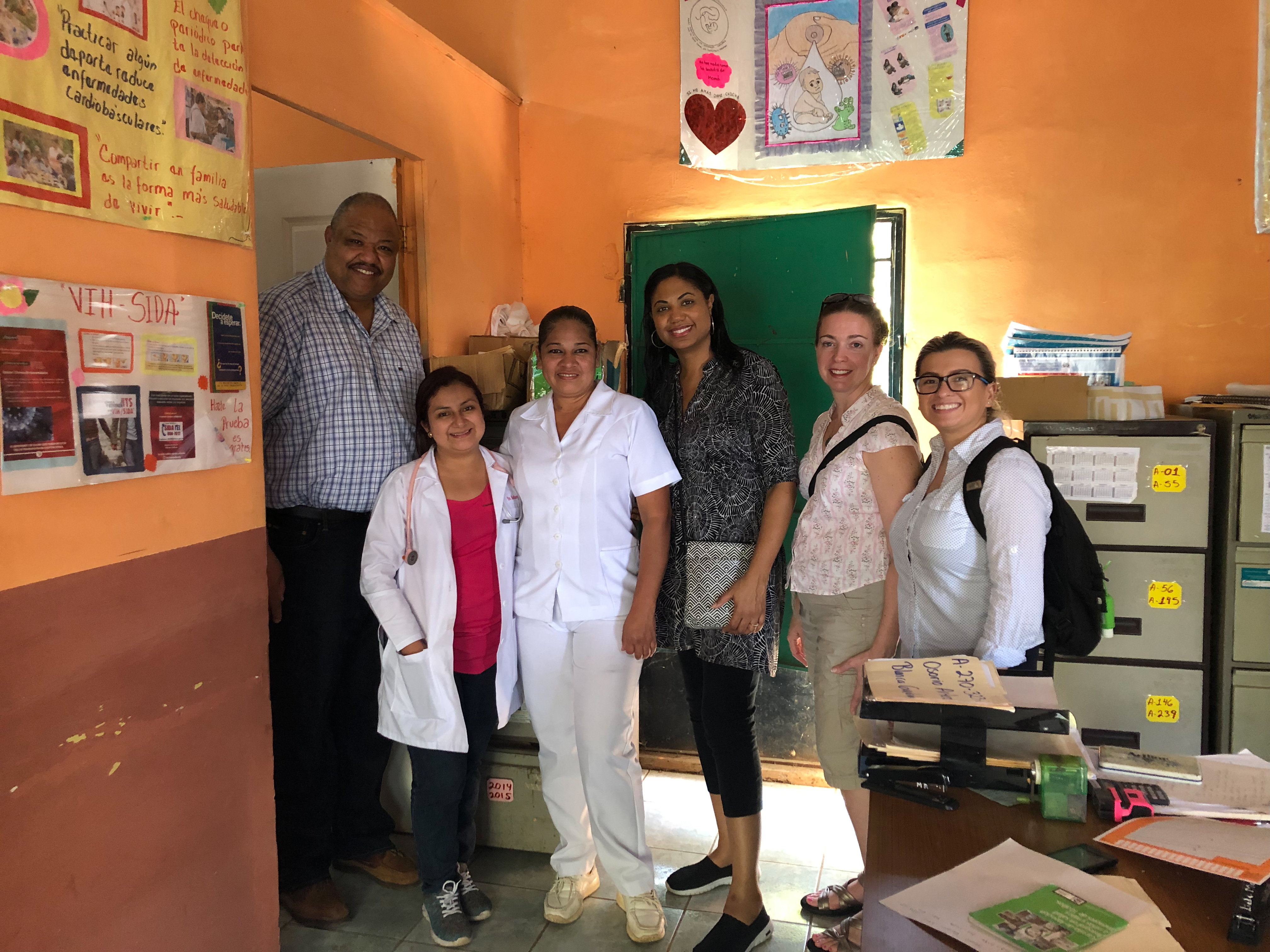 One is in a town that used to be on the Pan American Highway, and thrived because of the travelers who passed through and bought their fruit and ‘artesania’ (art and craft work). The new highway bypasses the town and they have been in an economic slump ever since.

The other church is in a quiet border town right on the river between the two countries. Bishop Peña took us there to show us how easy some border crossing is: a hanging hammock rope bridge, with fencing on each side, over the river and no check points of any kind on either side. 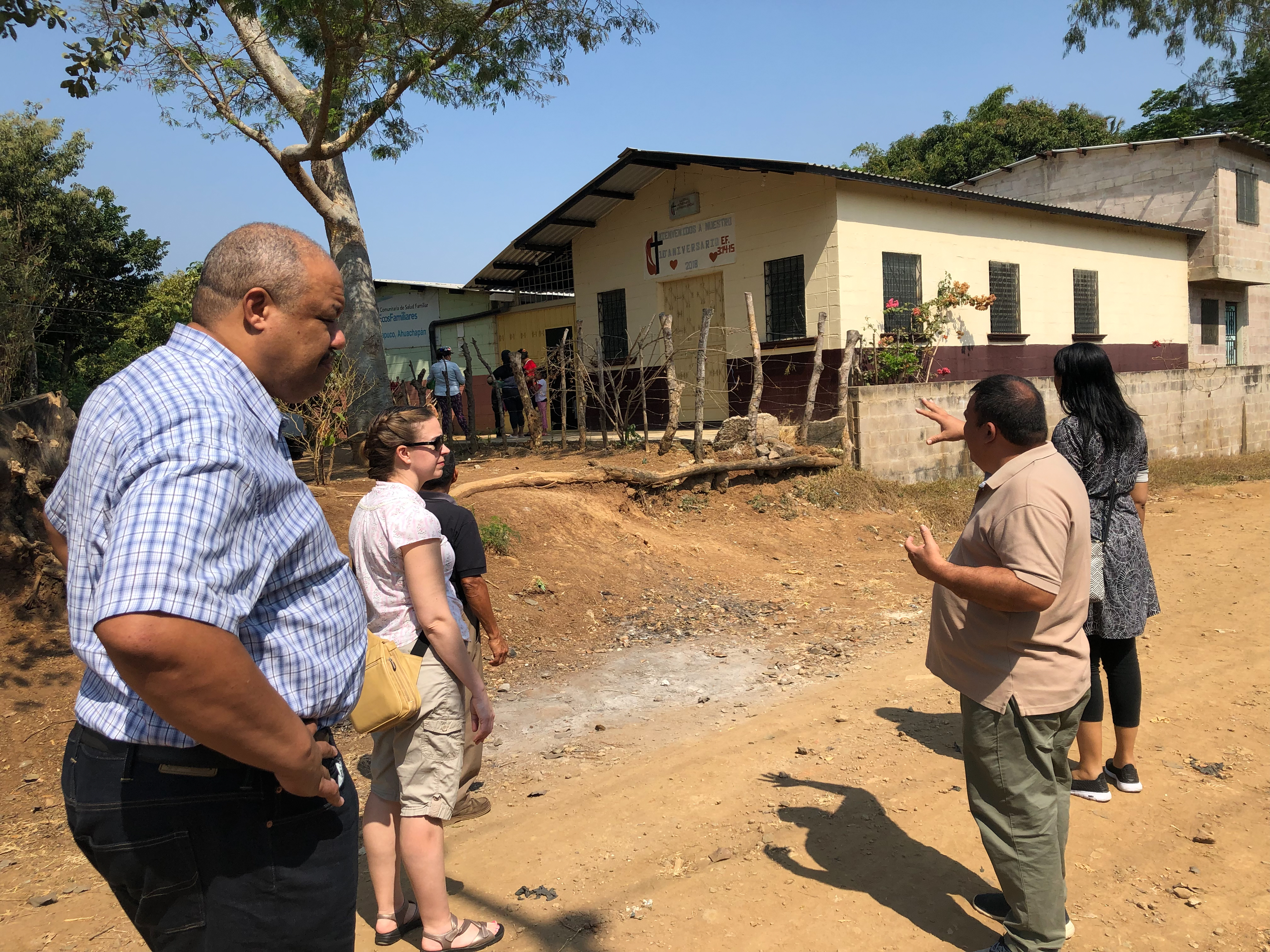 Many Guatemalans cross here each day to work in one of the nearby factories, including Kimberly Clark (Kleenex, Huggies, Cottonelle, etc.). We walked over the bridge to Guatemala, and then, to return, since I alone was dressed for it in short capris, I took off my sandals and waded through the water to cross back, ‘mojada,’ (wet – also the term used for those who cross illegally into the U.S.) into El Salvador.

On the last day, we learned about the ancient history of El Salvador. We visited Joyas de Ceren, a Latin American Pompeii. It’s a whole village buried under 15 layers of ash dating to around 550 A.D. 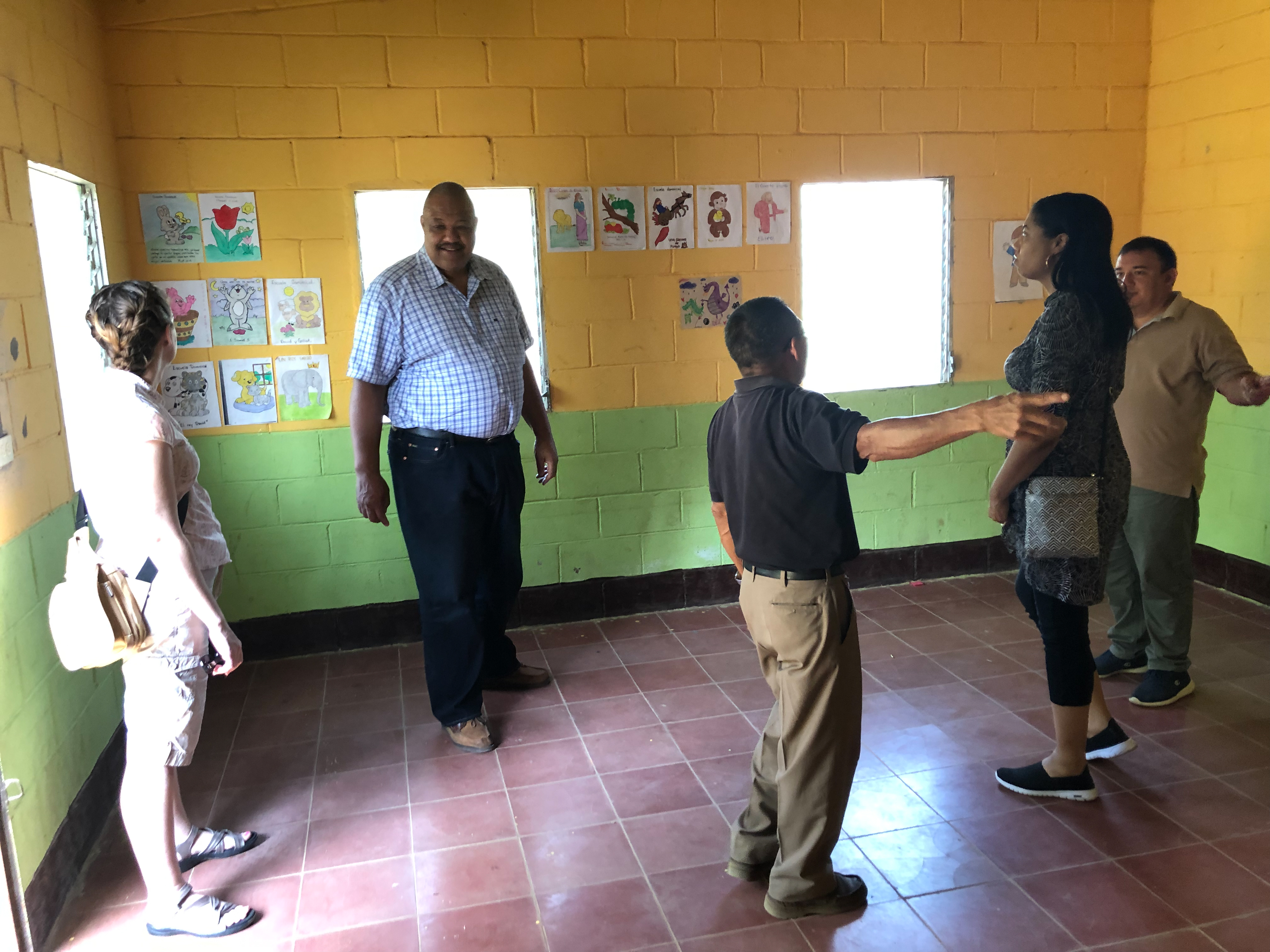 What was interesting was that each house had a room that was for communal use: a meeting room, a community kitchen for special rituals, and a sauna for purification for rituals, childbirth, etc.

We also visited Tazumal, which dates back to 2,000 B.C. This temple changed hands over the centuries and each new people added onto it, rather than destroy anything pre-existing.

My question this entire time was what can we, the Baltimore-Washington Conference, do that isn’t already being done? What needs can we uniquely fill? There are a few opportunities. 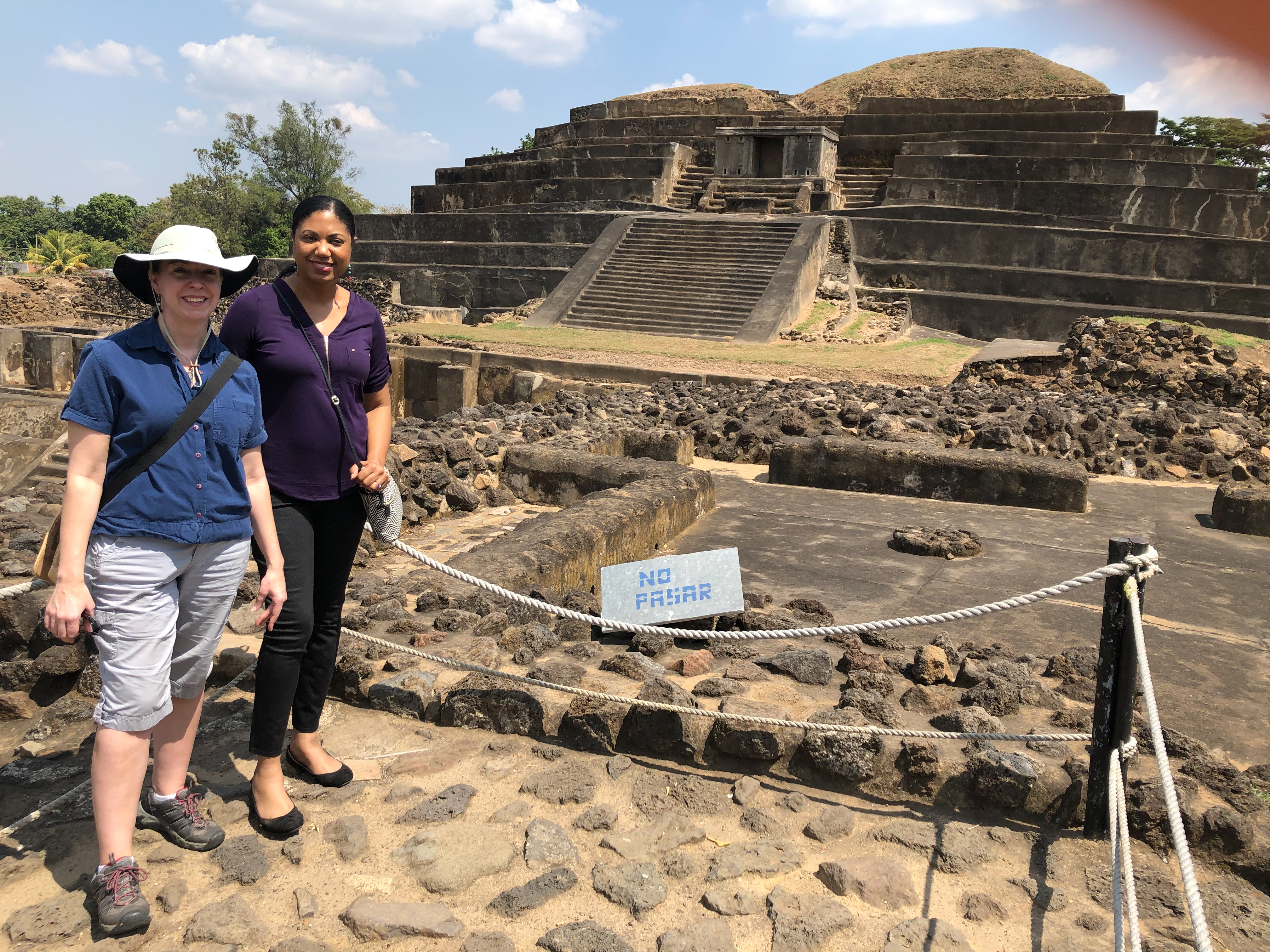 One is that eight of the pastors will be losing their salary funding from the General Board of Global Ministries over the next couple years. It’s helpful for pastors to be fully funded, with a $4,200 a year salary so that they can focus on their ministry and not also on earning money.

Another one is Pastor Gloria’s kitchen, which Rev. Tim Warner is spearheading. 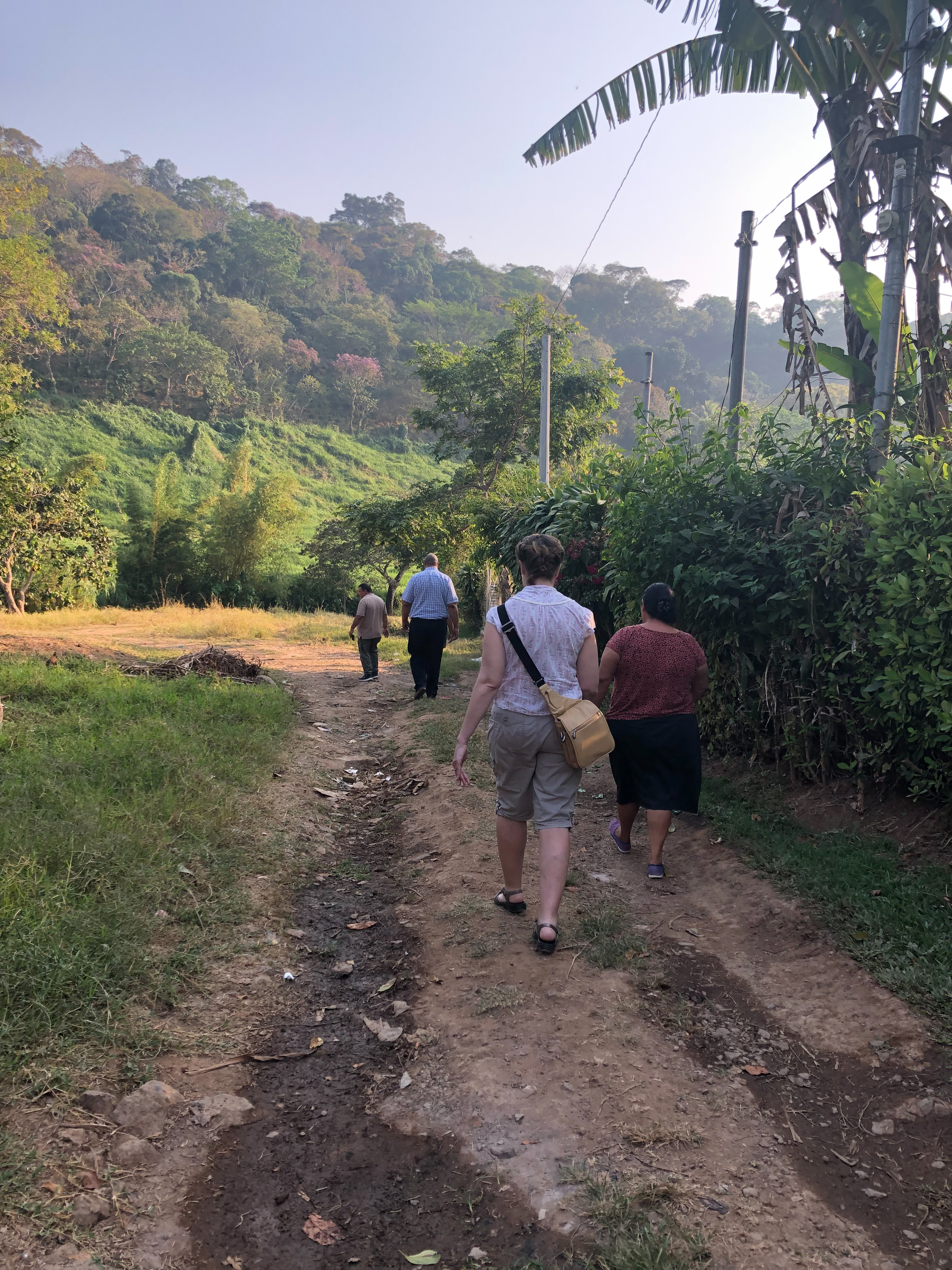 Medicine for the clinics can be sent in the suitcase of an accompanying traveler. Sponsorship for students is always welcome. And finally, one that does not necessarily involve finances, Bishop Peña spoke several times about creating sister churches between local congregations, which could be as simple as covenanting to pray for each other and occasionally sharing worship on Skype.

Why did I go to El Salvador? I thought it was because I look for any opportunity I have to strengthen and reconnect with my ties in Central America. Before seminary, I served for over a year in Nicaragua and I’m always looking for what that part of my life has to do with my life as a UMC pastor.

However, when worship began Tuesday night at Iglesia El Shaddai, tears came to my eyes. ‘Vengo adorar.’ The real reason I went to El Salvador was to worship God with God’s people in Central America. 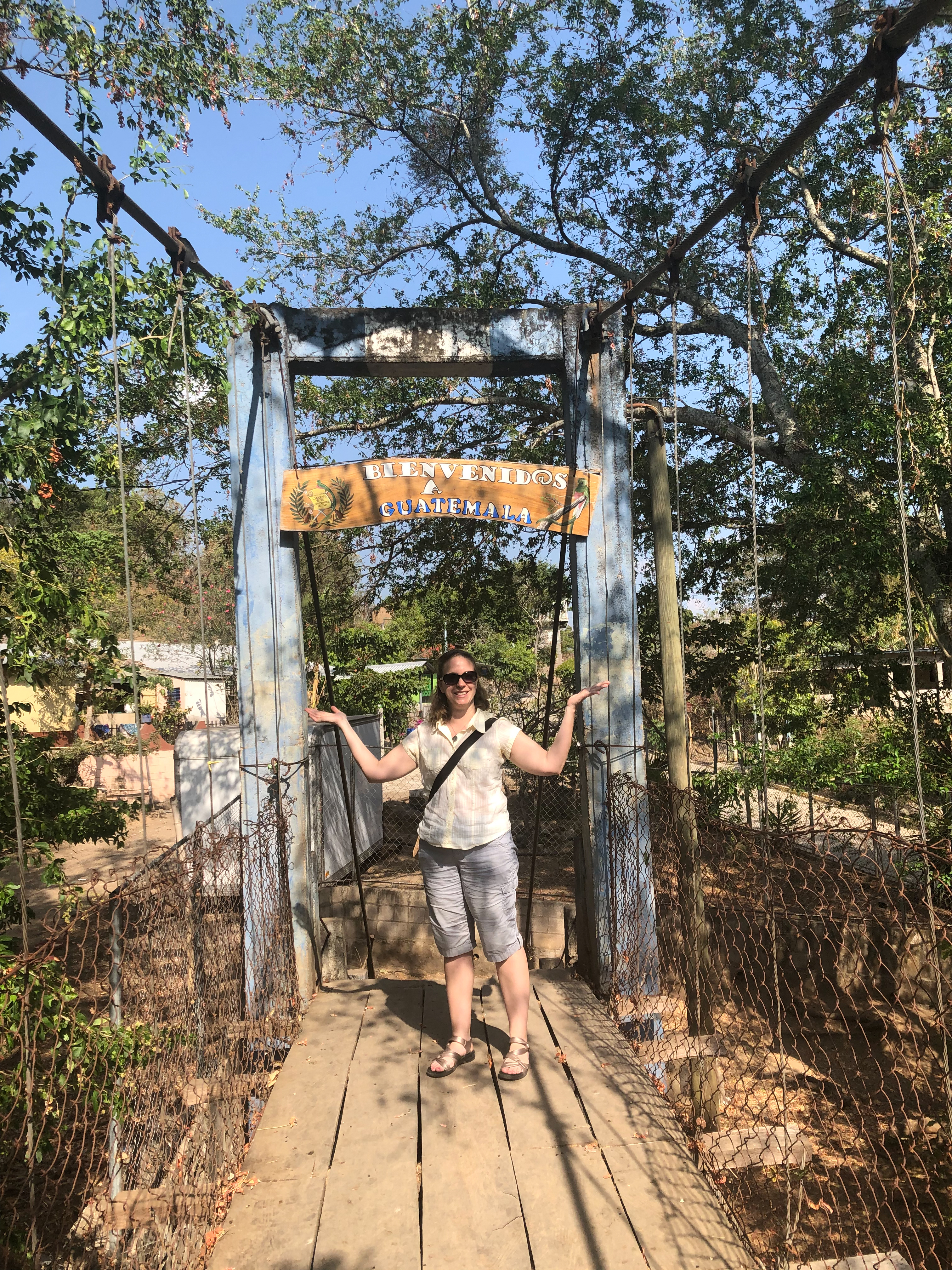 Excited of the possibilities.
May blessed rain come down over the land and seeds and blossom into fruitful ministries.
One day...