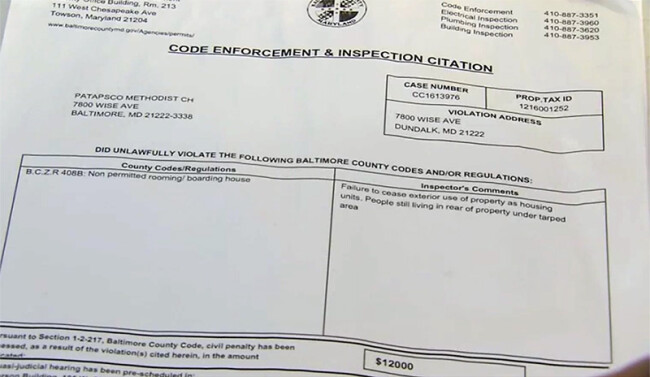 “Love your neighbor” is an ancient Christian imperative. But putting that love into action can sometimes be complex.

In Dundalk, the congregation of Patapsco UMC is facing a $12,000 fine for allowing unhoused people to sleep on their property.

“There is a heart for the poor in this church,” said the Rev. Katie Grover, pastor of Patapsco-Lodge Forest Cooperative Parish.

In an interview with Baltimore Fox News Dec. 1, Grover said, “This is the business that we conduct – caring for the least, the last and the lost, and the best we can do right now is let them take refuge. I had one woman say this is the only place she felt safe to lay her head down to sleep at night because she has no place else to go. It’s an issue with no really good solution, but we as a church believe that Christ has called us to serve the least, the last, and the lost."

However, Grover also acknowledges the concerns of the church’s neighbors – property owners around the church who have expressed concerns about garbage sometimes piling up and public urination.

“Our hearts are torn,” she said. “We are called to love our neighbor. This is a commandment. I can’t read the Scripture any other way.”

Two unhoused men, Warren and John, have been sleeping outside the church for two years, said Grover. Warren has even attended worship services and purchased an Easter lily one year in honor of his mother.

A year ago, she continued, two or three more homeless people began taking refuge outside the church. One woman found an apartment, but then lost it again. Grover and other members know these peoples’ stories. That’s important, she said.

“It means something to acknowledge the unhoused as human beings, to treat them as people,” she said. “In one encounter with an angry neighbor, she was told, ‘If you feed the rats, they’ll keep coming back.’”

The church has been warned by county officials about allowing the unhoused to stay on their property and received two other citations over the past five months. This current citation, for “non-permitted rooming and boarding house,” carries a $12,000 fine.

That amount worries Grover. The congregation, which averages about 50 people in Sunday worship, recently found out it must replace its heating system, which provides heat to the sanctuary. That carries an $80,000 price tag.

As it grows colder, Grover imagines they’ll transform the downstairs fellowship hall space for worship until they can get heat.

But while there is a broad range of opinions about the citation in the congregation, it has not dimmed their spirit of ministry. The church’s feeding program – which has been in operation for 20 years and provides between 70 and 100 meals each week, and its food pantry – will continue, along with the church’s clothing bank. Even though it is often financially challenging, the church serves as a United Methodist Community Center.

As she and members of Patapsco and Lodge Forest UMCs continue their ministries of mercy, caring for the poor, and of justice, seeking to end homelessness, they request prayer, Grover said. The church has until Dec. 18 to comply with the citation or pay the fine.

At church on Dec. 4, members prayed and met for an informational meeting. Baltimore County Councilman Todd K. Crandell also attended church to be present with the congregation and hear about their concerns for the unhoused in the community.

The church intends to follow the law, Grover said. They are exploring legal options in which the citation may be dismissed and are building on already existing relationships with others working with the poor.

Following this story appearing in the news media, they’ve received support from around the world. Friends from Arkansas, Georgia and Ohio have all sent prayers of support. This may an answered prayer to our desire for this house of God on the corner to be a light to the community, Grover said.

She is hopeful Patapsco’s response to the unhoused will shine a light on the needs of the poor of Baltimore County.

On Facebook, Grover issued a word of thanks for the prayers coming in from across the connection. “The prayers are felt and needed,” she said. “I can’t help but believe God has something big in store for us if we can listen and be brave…brave enough to risk, to believe nothing is impossible with God.”