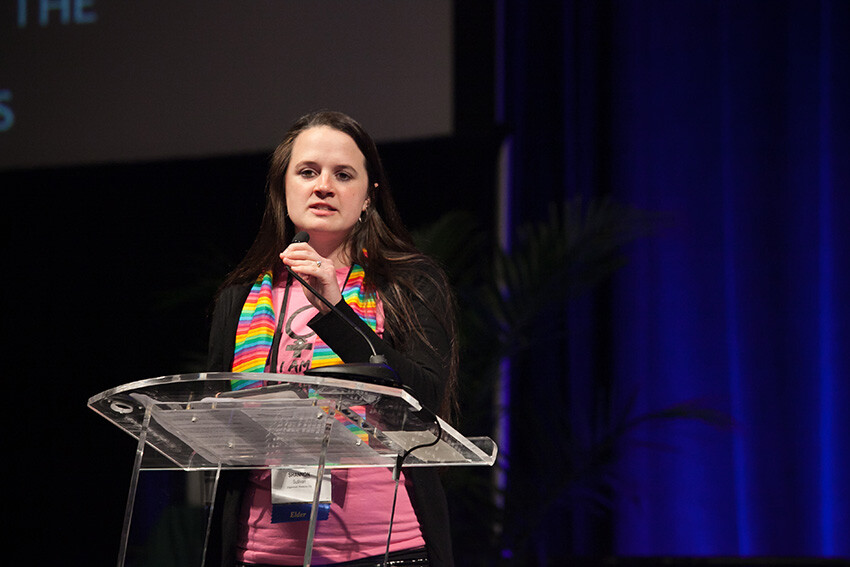 Rev. Shannon Sullivan speaks to one of her three resolutions she brought to the 2017 Annual Conference Session.

An important part of the annual session is holy conferencing, in which United Methodists join in conversation and debate to shape the nature and policies of the church.

On June 1, Baltimore-Washington Conference members joined in holy conferencing around four resolutions, submitted by members, and five amendments to the denomination’s constitution.

In previous years, conference sessions have run out of time before considering resolutions on the conflict between Israel and Palestine. This year, members debated two resolutions that suggested a potential response by the BWC to the conflict.

The first, a resolution to boycott Hewlett Packard products, passed 396 to 318. Boycotting HP products, said the resolution’s maker, the Rev. Shannon Sullivan, would be a witness to peace against a company that manufactured products used by the Israeli military.

“If it’s just a nudge, then let that be our nudge,” said the Rev. Mark Schaefer, speaking for the resolution.

The second resolution suggested “aspirational language” to encourage the conference’s Board of Pensions and the Mid-Atlantic Foundation to consider expanding their socially responsible investment screens and refraining from investment in Hewlett Packard, Caterpillar and Motorola because of these corporations’ involvement in the Israel-Palestine conflict.

During the debate on the complex, decades-old conflict in the Middle East, members spoke out about the need to uphold the United Methodist Social Principles, while not taking fiduciary responsibility out of the hands of investors.

Members also voted 383 to 304 for the Baltimore-Washington Conference to rejoin the Religious Coalition for Reproductive Choice.

The vote followed a debate on the church’s “nuanced stance” on abortion and the value of RCRC, a pro-choice organization that also offers medical counseling and training on many aspects of reproductive health.

There are no financial implications to the Baltimore-Washington Conference belonging to the RCRC, said Sullivan, who was also the maker of this resolution.

On a more administrative matter, after some questions and consideration about cost, members voted 634 to 44 to adopt a moving policy which will give retirees who are moving similar financial support to that received by active clergy.

The policy will be implemented with this year’s class of retirees.

In other action, BWC members are joining United Methodists from across the globe in voting on amendments to the denomination’s Constitution.

The amendments covered such topics as

While members debated the merits of the amendments, they could not revise them in any way.

The results of the worldwide vote will be announced by the Council of Bishops when all the voting is complete.

» View the complete text of these resolutions and Constitutional amendments, along with the approved Nominations Report.