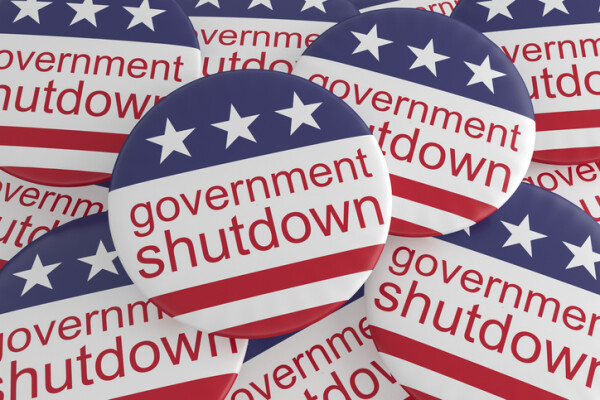 As the partial Federal government shutdown enters its third week, the impact is starting to be felt in people’s pocketbooks. Churches throughout the Baltimore-Washington Conference are directly impacted by furloughs since many of the 800,000 federal workers live and worship in our conference. But that doesn’t include the countless other people also hurting because of the shutdown.

News reports indicate that should the shutdown continue into February, people may not receive food stamps next month. The food stamp program, or SNAP (Supplemental Nutrition Assistance Program), serves 42 million people across the country, according to NBC News. ABC News reports that 68 percent of those served by SNAP are families with children. 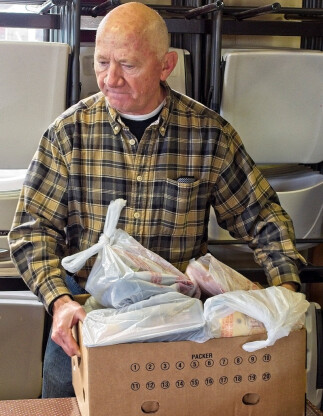 A volunteer for the Morgan Chapel UMC food pantry picks up a box of food to carry to a client's car. Nearly 100 families in southern Carroll, western Howard, and eastern Frederick Counties are served by the food pantry each month. Volunteers come from church members, area service club and students who need service hours. Photo by Miles Smith, Morgan Chapel UMC.

At Morgan Chapel UMC in Woodbine, midway between Frederick and Baltimore, the Rev. Jim Skillington said that his church has a “fairly substantial” food pantry, and they are preparing for more.

The pantry operates the second and fourth Sundays of the month, Skillington said. “We’ve been serving more than 75 families, a number that has been growing since summer," he said. "We are preparing for an even larger number of families beginning this Saturday (Jan. 12).”

Nine out of 15 federal departments are closed, according to CBS News, as well as dozens of agencies. About 75 percent of government services are unaffected by the shutdown, they said.

CBS also reported that “(M)ore than 420,000 federal employees are working without pay, including agents from the FBI, ATF, DEA and CBP, as well as staff from the State Department, Coast Guard, IRS and Department of Homeland Security.”

All of this has consequences, some of them unintended. The Rev. Donna Claycomb Sokol, pastor at Mount Vernon Place UMC in Washington, D.C., recently wrote on her Facebeook page about some of the effects she’s seen from the shutdown.

"Its impact is being felt by so many people in our city,” she wrote, “from Uber/Lyft/cab drivers who don't have as many customers, to a colleague whose full time job is to park cars at a nearby hotel; government employees who are already furloughed to those who are not sure if their agency's temporary funding will last; people scheduled to be married this week who need a license from a court that is closed to those who desperately need to show up for their contract job in a building that is closed."

At North Bethesda UMC, in Bethesda, Md., the Rev. Jeff Jones held a support-group style meeting the morning of Jan. 7 for those who are out of work because of the shutdown. The “Furlough Fellowship” welcomed a small group of people after being announced in church the previous day, Jones said.

“I’ve had three unemployment support groups in my ministry,” he said, “and that’s where the idea came from.”

During the meeting, Jones said that people shared their concerns and struggles, from how someone was supposed to pay for college tuition for a child, to what it would be like at the office once the shutdown ended.

“The group really appreciated a place where they could share the struggle,” Jones said.

Jones, who has served in Bethesda since 2014, said the group steered away from the politics behind the shutdown. Instead, Jones focused the group on “recovering our Human Being rather than on Human Doing. I shared some St. Benedict recovery of small group power during tough times, and grief and stress issues that often accompany time-outs.”

Jones said that the Fellowship will continue meeting as long as the shutdown lasts.

Good Shepherd UMC in Waldorf, located about 30 miles southeast of Washington, lifted prayers during worship Jan. 6, according to its pastor, the Rev. Laurie Gates Ward.

“I have also been asking in the schools if there are families feeling the effect yet that we can help,” she said. “I suspect we will really start to feel the effects this week as folks don’t get paid.”

Mount Hope in Sunderland in the Washington East District has offered to provide assistance to member of the congregation who is a government employee.

How about offering financial education and budgeting classes so the next time this happens people will think about having an emergency fund. There have been 20 “shutdowns” in modern history including a 16 day shutdown under the last President. So, we should be helping people prepare themselves in a variety of ways. What is easiest for church folks to do is seldom the very best thing for the person in need. This can be done IN ADDITION TO the handouts. I say OFFER these classes—it would be voluntary, but my gosh, stop doing the easiest thing you can think of like handing out food. I would love to take some free classes related to personal finance.

Could you please send me or direct me to similar articles during 2013 Gov. shutdown. I would like to compare the unfortunate impact to government employees then and now. petermarsh2015@gmail.com

I also would like to support John Ray’s sage advice. If you are going to be a government employee you need to keep an emergency shutdown savings fund as this is a predictable risk of your employer. Dave Ramsey’s Financial Peace University is a good class for basis personal finance.

The idea that federal employees need training in budgeting instead of action to end the shutdown is not very helpful at this point. My daughter is a federal employee who is furloughed. She is very good at budgeting, and does not live paycheck to paycheck. Many federal employees are just getting by -- especially those who are paying student loans -- and now they have to worry about paying rent, transportation to get to jobs for which they aren't being paid, child care expenses so they can go to those jobs, etc. They need help, not lectures on budgeting and managing money. Some people may need those things -- especially the President and Congress. Fortunately my daughter has been able to manage well enough to be able to make a down payment on a car after her 2007 Honda died, but she now has car payments, as well as rent and other expenses.

Well said Ms Snyder! I am a retired Federal worker after eleven years. These shutdowns cause a long-term affect to it's employees that few know or care to find out what happens to the life of a person who has to contend with getting back to normal. The stress alone takes a toll. Your credit has been tarnished. You have now used your own leave if you don't have money to go to work. It looks bad on your attendance record that you have called out of work for a week. Not all government workers are making over 100,000 dollars a year. The shutdown is over and everyone assumes life for the government work is okay but that is not the case. I am a good steward of God's money but some things are out of your control. I have to say I look to God for help and he has provided for all of my needs. Give them a track to the best financial helper ever Jesus!