The first bus arrived on April 15. That’s when the first volunteers swung into action – offering care and compassion to people they had never met.

Since then, Gov. Gregory W. Abbott of Texas has been sending busloads of migrants to Union Station in Washington, D.C., as a political statement to make President Biden rethink lifting the Trump administration’s Migrant Protection Protocols established in 2019 under Title 42, and other changes in U.S. immigration policy.

“By busing migrants to Washington, D.C., the Biden Administration will be able to more immediately meet the needs of the people they are allowing to cross our borders,” Abbott said to the press. “Texas should not have to bear the burden of the Biden administration’s failure to secure the border.”

Except, the Biden administration hasn’t been caring for them. A collection of fewer than 200 volunteers from faith and civic groups has. Capitol Hill UMC is one of these groups, opening its doors to people who arrive, usually hungry, tired and often traumatized, with only a small plastic bag of possessions.

The volunteers provide a meal, some small donated personal items, and tickets to travel to the next stop on the migrants’ destination, often other cities where families or friends live.

Those who volunteer to make the 30-hour trip on Abbott’s buses are legal immigrants, moving through the U.S. legal system as they seek asylum. Arizona has now also started sending buses. To date, more than 2,000 migrants have arrived in D.C, said Fariha Huriya, a core organizer of the volunteer network.

On June 30, John Rohrbach, a member of Capitol Hill UMC, was standing outside the church to welcome the next busload of migrants. Lending a hand is bittersweet. The task, he said, reminds him of “how broken the world is.”

In the waiting, he reflects on philosopher Immanuel Kant’s categorical imperatives – moral commands that humans should obey regardless of their conditions. One of these is that you will not use other people as tools for your own purposes. 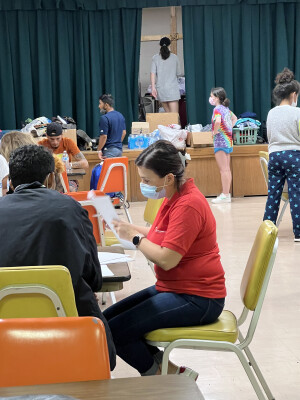 “These migrants are being used as political pawns,” he said. “It’s just wrong.”

When they complete their 30-hour bus journey, the migrants are driven by volunteers the few miles from Union Station to the church. There is a handful of other churches and a synagogue also serving throughout the week as centers for respite and welcome. Many of the migrants have traveled for weeks, often through dangerous conditions, on their journeys to this new life. Some wear only flip-flops. John helped one man find a pair of shoes from items donated during the past month by the people of Baltimore-Washington Conference.

This collection was organized by Emma Escobar, the Conference Coordinator of Hispanic/Latino Ministries. In Capitol Hill’s fellowship hall, she helps with the intake, answering questions and recording information that will allow the migrants to be given tickets, paid for by contributions from concerned people, to get them to their next stop.

“Once I was a person who arrived in the U.S. not knowing the language, confused, and scared but full of dreams,” Escobar said.  “There were people who helped and supported me and my family. So, I do this work to give back and because I see myself in their eyes.”

The migrants’ stay at Capitol Hill can take hours. A few times buses have arrived at 11:30 p.m.

The Rev. Stephanie Vader, the church’s pastor, remembers how during one late-night stay, volunteers from the church made a makeshift tricycle for the tired children to pass the time. A financial gift from Faith UMC in Rockville to this ministry enable the church to provide a meal.

Hosting the migrants, since they opened their doors to them in mid-May has given Vader “a new appreciation of the privilege of planning.” Because, by design, there is no set schedule for the buses, Capitol Hill and the volunteers need to be ready at any time, uncertain of when and how many people will arrive. The randomness is a challenge. “It’s such a privilege to know what will happen when. A lot of people are not able to live that way,” she said.

But when they do arrive, Vader responds to a vast array of requests – she also listens. Recently, one man showed her a video of his old life – harvesting bananas. On a world map hanging on the wall, he showed her where he had come from in Venezuela and the route it took him four months to walk. He showed her photos of his wife and his dogs. And told her of his hopes of coming here to start a new life.

Another man approached Vader and asked where they now stood on the map. She pointed it out to him – Capitol Hill UMC, Washington, D.C. It was a sacred moment.

She was also touched, during one visit, when she came across a man charging his phone at an outlet in the sanctuary. In his exhaustion, and amidst the stillness, he had fallen asleep. She let him rest.

She is also grateful to be able to share the church with many of the volunteers in the community groups who do not always have the kindest ideas about Christians and faith-based organizations. They watch the church in action, and it makes a difference, Vader said.

Jamal Oakman, a summer intern with the Baltimore-Washington Conference who is focusing on the issue of immigration, is grateful to see the church involved in such a practical, hands-on manner. “Faith-wise, in the Scriptures, we’re not just encouraged to welcome migrants. We are called to love and help others,” he said.

The volunteer network will continue providing a trauma-informed response, offering kindness and aid to the migrants, Huriya said. She does this work as a labor of love and solidarity. But she cautions, “the burnout is real,” the effort is immense and so are the needs.

Money is the primary need, Hiriya stressed. Funds sent through Sanctuary DMV at http://sanctuarydmv.org/donate will be used to continue this initiative and provide transportation to the migrants to the cities where their sponsors or court dates are.