Editor’s Note: This summer, tears mixed with the baptismal water as the Rev. Tim Warner began to understand hope in new ways. As one of the founders of the BWC’s Camp Hope, he celebrated the 13th year of this weeklong gathering at West River of children whose parents have been incarcerated. In this he’s learned to never cease to be amazed at God’s grace and power. Warner shares his thoughts:

In 2005, before the phrase “school to prison pipeline” was mainstream, I heard a statistic that made the hair on the back of my neck stand up: 70 percent of the children of people who have been incarcerated have negative contact with the penal justice system, most becoming incarcerated themselves.

Seventy percent. Let that one sit with you for a moment.

Nearly all these kids come from communities like the one in which I was raised. I knew we needed to do something — anything — to take a shot at getting them into a setting where the power of God could change some of their despicable reality.

Theirs is a reality of economic deprivation, families broken by addiction and hardship, and schools that don’t have the resources students need. There is hunger, stigma, and anger. What other outcome is possible for these kids? In some prisons it’s not surprising to encounter three generations from the same family. What do we imagine lies ahead for these children?

West River has proven to be a place of transformation for kids. I experienced it first-hand working at its Basketball Camp for years.

I wondered, could a week with young mentors with whom they could build positive, lasting relationships and hear authentic testimonies about God in their lives really help break the cycle? Could a week of building community and having good old-fashioned, unstigmatized fun without the daunting responsibilities and troubles of their everyday lives help them break free? Could adults who understood their plight expose them every day to enough about the Jesus who could transform them to make any difference?

I delighted to share that, for years now, the answer has been, “Yes.”

While I went there woefully unprepared, this summer’s camp was full of proof of the possibilities.

Five of the original campers (all but one of whom are now enrolled in 4-year universities) were scheduled to be counselors. Three, who are siblings, could not attend at the last minute because of the untimely death of one of their infant children. We will see them next summer back at West River, which has become their old stomping ground.

I was delighted that another of them was actually serving for the summer on camp staff. Having her there as our liaison brought tears to my eyes every day.

We don’t have room for her story here, but if you knew it, you’d be crying too.

The final Camp Hope veteran joined us as a counselor — or at least that’s what we thought at the beginning of the week. Midway through the week, this young woman, who had been neglectfully burned as a young child, who had been through too many skin graft surgeries to count, and who, with the God-sent help of many, had managed to survive, thrive and complete her freshman year in college.

At age 19, her foster-care checks had stopped coming and she needed to find a new place to live. So there she was, without a home at 19, but around God’s people in the presence of God. And as God would have it, God had left a camp staff position open for her. God also sent her wonderful women from West River’s Grandparents’ Camp, who raised a huge offering for her on the spot and who will continue to be her grandparents in every way but blood relation.

In that beginning, in her story, I was reminded, “When you go through deep waters, I will be with you…” 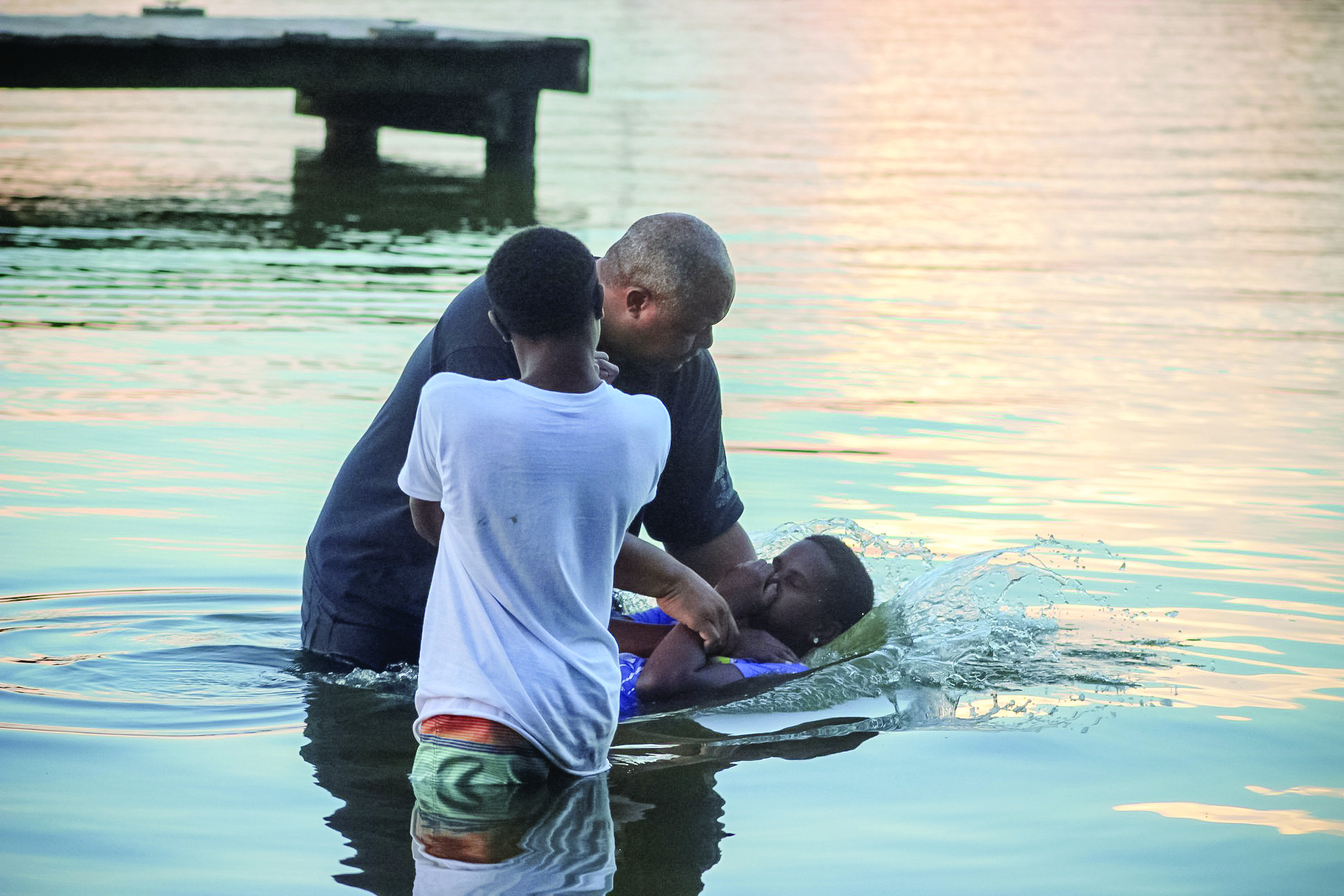 My understanding deepened during the trying week, during which I wanted to throw in my camping towel many times. After unexpectedly pouring out into this newly homeless young woman, after I had to intervene in a fight between campers, after poor behavior made me bring them back from a July 4th fireworks display before they had seen the fireworks, after I had preached and taught seemingly to deaf ears, and after my best efforts to get them exposed to sailing landed me and my cell phone in the bay rather than on the boat (shout out to Pastor Tim Dowell and the Sailing Camp for towing me in!), God told me why I was there.

God used three simultaneous behavior issues to put me under a pavilion with three young men for two hours, in which one of us was crying the entire time.

I realized all I had been through in my own life was, in some way, what each of those young men needed to hear. Every one of them needed the father in me that moment. In spite of my exhaustion, I sensed I needed a fresh view of the reality of why I had answered God’s call in the first place. I realized that my deep water and their deep water was not only equally as wet, but it is the same water, and that God was in there with us.

It was my spiritual delight this summer to stand in West River with those young men and baptize them in the name of the Father, and the Son, and the Holy Ghost.

While West River will always be a special place of transformation, it is the people who God sends there to be the church that he uses. We should be that church — together with people in their water — everywhere we go.

When we are a part of the body of Christ, God is in the deep waters of our lives with us. And because of God’s presence with us, we are compelled to be in the deep water of others in the name of Jesus. That only comes by difficulty and sacrifice and inconvenience and the subjection of our will.