The Rev. David Simpson is set to retire – again – at the end of June. He tried to retire once before, in 2015, but ended up being called by Bishop Marcus Matthews to help out a church in need.

That church, Calvary UMC in Frederick, has made a drastic turn-around in the past 15 months under Simpson’s leadership. It’s a story any church facing conflict and decline can replicate. 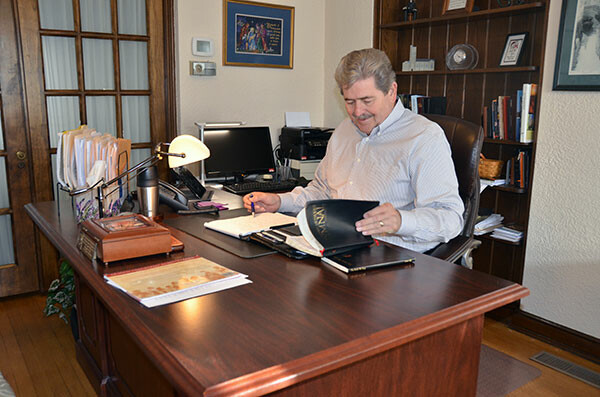 The Rev. David Simpson works at his desk in the office of Calvary UMC in Frederick.

Simpson was appointed to Calvary in late February 2015. The bishop asked him to serve as an interim pastor for four months in addition to his then-duties of being on Conference Staff and co-leading the Imagine No Malaria campaign.

When Simpson arrived at Calvary, a cathedral-like church built in 1929-1930 in downtown Frederick, he found the congregation in chaos. There was no vision, no goals, no objectives, he said, and the church was losing both members and money.

“It was really ugly,” he said. Various groups in the church were in “open warfare.”

The first thing Simpson did was establish a four-point plan: stabilize, create order, establish a vision, and promote healing and reconciliation.

“Everything starts and ends in worship,” Simpson said. “I had to stabilize worship, so I preached every Sunday. The church needed to see the same person in the pulpit every Sunday.”

He then set about to stabilize the staff. Simpson informed the staff that everyone’s job was safe, but they had four months to prove they belonged at Calvary. He began holding staff meetings every Tuesday, but with intentional changes to the agenda. Instead of diving straight into business, the meetings opened with prayer and times of what Simpson calls “loving on each other.” They also shared a meal together at every meeting.

Simpson also sought to stabilize the church’s finances. Staring at a projected deficit of $50,000 in a $660,000 budget, Simpson simply asked from the pulpit. “We need your support,” he said, “and people responded.” He also made numerous one-on-one visits with people who used to support the church both with their presence and their gifts but who had left in the midst of the troubles.

At the same time as this was being done, Simpson worked on “order.” For example, he said, the order of worship was not dependable from week to week. He placed this ministry in the hands of the Rev. Julie Wilson, a Deacon serving at Calvary, and instructed her to follow the United Methodist Book of Worship, “not because this is what David does, but because this is what United Methodists do,” he said. “She has stepped up to the plate on this.”

To help create order, Simpson said that he hearkened back to an old saying he learned from Bishop Joseph Yeakel, who served the BWC from 1984 to 1996. “The bishop would say, ‘No secrets, no surprises, no subversion,’” Simpson said. “I’ve said that so often here that I’m sure people are tired of hearing it.”

The Staff Parish Relations Committee, for example, used to meet in secret, a violation of the church’s Book of Discipline. Simpson put a stop to that and called for transparency in everything.

But the hardest part – and the on-going part – is healing and reconciliation, Simpson said. It was clear last March that this would take longer than the four months Bishop Matthews had appointed Simpson to Calvary. Simpson agreed to delay retirement one more year.

And again, he used worship to affect change.

In the spring and summer of 2015, Simpson preached on what it means to be church and what it means to be a child of God. He knew that, like every church, there were three groups in the church: those on either “extreme” end of an issue or subject, and the vast majority in the middle. He needed to address the people in the middle of the issues, he said, and assure them of God’s never-ending love. In addition to the sermons, he met one-on-one and in small groups with those on the edges, spending 20 hours per week meeting with those people.

To emphasize that the church is one family, Simpson turned to a portion of worship that makes many people cringe: the passing of the peace.

“I became directive” during this part of worship, Simpson said. “I would say, ‘Find someone you don’t know and talk with them.’ Or, ‘Find someone you’ve had a disagreement within the past and talk with them.’ I didn’t’ allow this time to be perfunctory.”
Simpson also helped the church decide to combine their worship services for the summer. All of this, he said, in an effort to show people that they were one body, one church.

He also sought to bring about reconciliation through creating projects that would bring people together. He recruited two women, for example, who were on opposite sides of an issue, and invited them to lead the effort to refurbish the church’s library. The church’s fellowship hall was re-painted which, again, brought people together to work side by side.

Perhaps the largest project is the church’s pipe organ, a source of pride for the congregation along with its carillon peal bells. The organ is on its last legs, Simpson said, and a study committee is working on recommendations for replacing it which may cost $1.5 million.

Even with the success of getting people back to working together on a common project, the danger in all this, Simpson said, is that the church may become too inward-focused. “I don’t want them to forget,” he said, “that it’s not about us; it’s about the people in our community and in our neighborhood.”

Simpson said that he could not and did not do this ministry alone. He cited the support and work of two retired pastors working alongside him, the Revs. Harry Cole and Ken Humbert, who have provided pastoral care and visitation ministries to the congregation.

Slowly but surely, the changes have worked. As Simpson prepares to retire and hand over the reins to a new pastor July 1, the church’s worship attendance has stabilized at 300 and is beginning to grow again. The church’s finances are such that, for 2015, they will finish with a surplus of about $40,000 with all bills paid.

Calvary UMC, Simpson said, has a bright future in Frederick, a city, he said, that is growing, vibrant and alive.  “We need to be a part of that,” he said. “We have to catch up with the city, and to do that, we have to turn our focus outward.